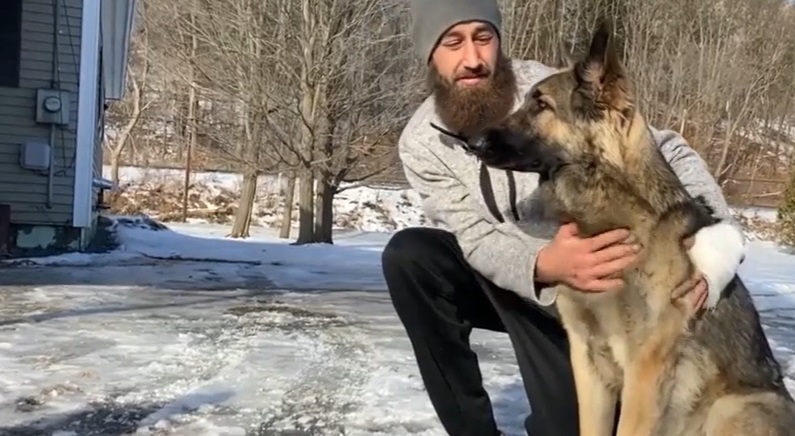 You’ve heard that, for cops, there’s no such thing as a routine call. While that’s true, there are some calls obliterate routine. Take this both heartwarming and bone-chilling (literally) recent story out of northern New England.

Two men in a 2019 Ford F350 pickup truck traveling on NB Interstate-89, had just crossed the border (over the Connecticut River) from Lebanon, New Hampshire into White River Junction, Vermont, when something went dreadfully wrong.

According to the New Hampshire State Police (NHSP) Facebook page, at about 10 p.m., on January 3, 2022, a 911 dispatcher sent NHSP State Trooper Tom Sandberg and some Lebanon Police Department officers to investigate a “dog running loose on an interstate.” The trooper and officers arrived on the N.H. side of the border.

Soon after their arrival, they located the excited canine. They attempted to get ahold of the dog so they could get it off the roadway. But each time the trooper and officers attempted to get close to the dog, it didn’t run away but kept trotting further northbound, as if it wanted them to follow. The dog kept going until it had crossed the bridge into Vermont.

It was at this point the dog stood at the top of an embankment looking down. That’s where the cops discovered a damaged guardrail where a vehicle had apparently smashed through as it left the roadway.

They searched the area and located a severely damaged pickup truck that had careened through the barrier, apparently rolling over as it went off the freeway and then down the embankment. At the crash scene, the officers discovered two men who’d both been ejected from the vehicle during the crash. The men were hypothermic and injured.

Officer.com described that cops at the scene said the dog, whose name they later learned was Tinsley, “knew exactly what it was doing, and it was a lifesaver.” References to the famous long-running TV show dog star Lassie were bound to occur.

NHSP Lt. Dan Baldassarre told CNN, “This was almost like a real-life Lassie situation. It’s really quite remarkable. This dog definitely saved their lives. I don’t think they would have survived the night given the temperatures.”

Tinsley, whose owner was one of the men injured in the crash, was described as a Shiloh Shepherd. A breed created from the German Shepherd Dog by blending it with other breeds to create a beautiful breed that is larger than an average German shepherd and has longer hair—like a Collie.

According to FOX News Digital, Amber Lagace, the NHSP public relations and community outreach officer said, “The dog wanted Trooper Sandberg and the [other] officers to follow her. Tinsley never tried to run away, but rather [she led] them further up the road and over the bridge.”

Later, Cameron Laundry, of Hartland, VT., the injured owner of Tinsley, told WPTZ Channel 5, “She’s my guardian angel. It’s a miracle that she had that kind of intelligence to do what she did.” Reportedly, Tinsley enjoyed a venison dinner as a reward.

Reports indicate Laundry was soon released from the hospital after recovering from hypothermia and being treated for what doctors determined were minor injuries. The Vermont State Police (VSP) identified the other passenger as Justin Connors. They reported Connors’ injuries were more serious. He had to undergo “at least two surgeries” and, at last report, was still hospitalized and recovering.

The Vermont State Police is handling the collision investigation.