Skip to content
Portland, OR cops who protected their community are fighting lawsuits brought by Antifa or sympathizers, represented by the ACLU 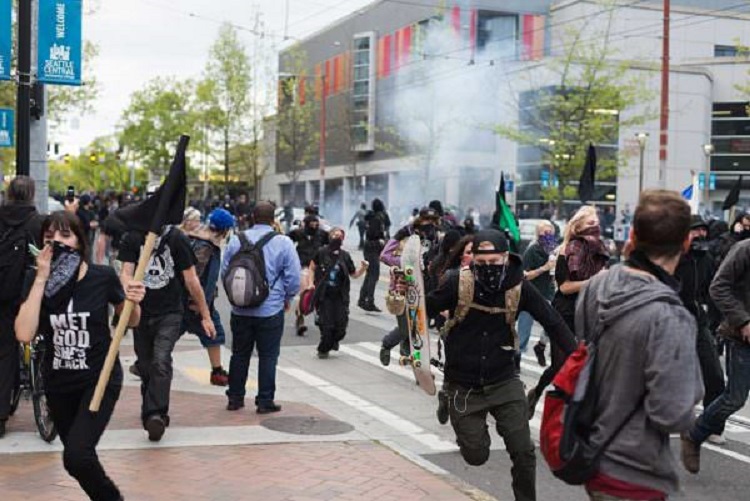 Some people, such as members of the most fascistic of the so-called “anti-fascist” anti-police groups, Antifa, whip out the phrase “police brutality” as if they were brandishing a switchblade knife. Then they verbally (and sometimes literally) slash, stab, and strike at law enforcement (and their supporters), trying to cash in on the consequences of their own poor decisions.

“But I didn’t hear the police orders to disperse.” Of course, you didn’t. No one making a complaint about being injured at what Antifa turned into the August 4th, 2018 Portland riot did. But think about it: have you ever heard any violent far-leftist protesters say, “I heard the police orders to disperse, but I stayed anyway and got hurt?” No, you haven’t. And you never will. Honesty is not the preferred tactic of leftist radicals. People interested in facts however, can see, hear and read those orders to disburse here.

For one thing, the protesters make most of the noise over which they say they can’t hear the orders to disperse blaring over police loudspeakers. A clever trick, that. Still, once the rubber bullets start flying, ordnance begins flashbanging, and batons commence nightsticking, shouldn’t you assume the cops (directed by city officials) don’t want you there? The time for individually addressed, gold-embossed invitations to leave the area has passed.

Portland, Oregon and its hapless, proven anti-cop mayor, Ted Wheeler, has adopted inaction as a favored (non) response against violent protesters for too long. With the city’s inaction or pro-Antifa/anti-police actions, leadership has essentially sent out the equivalent of individually addressed, gold-embossed invitations to violent leftist thugs across America.

Mayor Wheeler maligns and misuses his city cops (the Portland mayor also serves as the Police Commissioner) and hobbles them, encourages Antifa by refusing to arrest or prosecute them, and has even gone as far as refusing to allow police to respond to 911 calls from ICE, one of Antifa’s favorite targets.

You’ll likely recall a few months ago at an ICE detention facility where city police shot and killed an armed Antifa radical who attempted to shoot up and blow up the place. Had he been successful in detonating a large propane tank on the property, it would have likely resulted in significant property damage, serious injuries, and a loss of life.

Now, Portland cops who protected their community by confronting the domestic terrorist group with the force necessary to subdue their violence, are fighting lawsuits brought by Antifa members or sympathizers, represented by the ACLU, who refused to disperse when police ordered them to. Subsequently, they were injured in the melee.

Police can only do what is practical (or even possible) when issuing orders to disperse. They are not obligated to notify each, individual rioter (you are a part of a riot if you stay when others are being violent even if you are not). In a violent mass disturbance, police don’t have the luxury of separating non-violent from violent demonstrators who refused to obey police orders (usually three or more) to disperse.

Among others suing the city, Michelle Fawcett claims a less-than-lethal flashbang (emits a light burst and loud blast) fired by a police officer struck her. Fox 12 Oregon reports Fawcett said she was “hit in the arm and chest, suffering third-degree burns.”

Fox 12 Oregon also related a report done by Empower Portland (EP), a radical, leftist group critical of Portland police responses to violent demonstrations. The report resulted in a suspension of the use of some non-lethal weapons to quell violent disturbances. From EP’s Facebook page, “Make no mistake: Outlaw and Turner are leading a war on boys that look like their own sons.”

Now, what could that comment possibly mean? Oh, right! Portland Police Chief Danielle Outlaw and Portland Police Association president Daryl Turner are black. Today’s leftists do not allow Americans who happen to be black to hold alternative social and political views. Their radical orthodoxy must be inflexibly adhered to and strictly obeyed.

Already, Antifa has a history of attacking cops with bricks, glass bottles, rocks, chunks of concrete, and Molotov cocktails. They also routinely damage property, including patrol cars, which then have to be taken out of service further affecting public safety.

In what was described as a candid interview, about the police response to Antifa’s violence, Portland’s Police Chief Danielle Outlaw, likened the confrontation “to a schoolyard fight.” She told radio host Lars Larson “I come with the intention to fight. And then you get mad because I kicked your butt.”

Chief Outlaw had more strong words for lawbreakers—and the mayor. According to the Willamette Week, last year, she said, “she approached Mayor Ted Wheeler and told him she would sweep the Occupy ICE camp—and she says she ‘wasn’t asking for permission.’” She told Larson, “This is what’s going to happen and here’s how it’s going to happen.”

That attitude from a police chief is so refreshing to street cops—to all cops.

The lack of effective response evidenced by the mayor, lack of prosecution, and worse, awarding of monetary damages to rioters in so many American cities, however, can only encourage more demonstrations and increased violence. The government’s first duty is to protect the community, not protect political protesters it supports. People should remind their leaders of their priorities and their obligation to safeguard the city’s law-abiding residents.