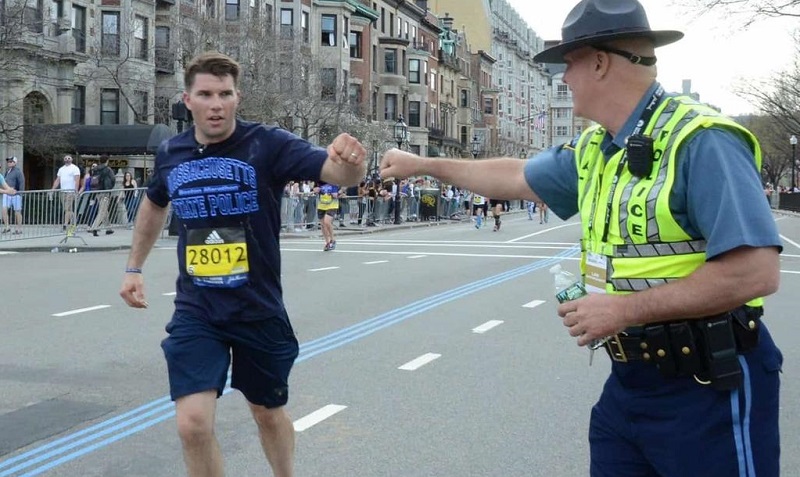 The Boston Marathon is always attended by many police officers from the Boston Police Department, the Massachusetts State Police, and a mix of cops from neighboring municipal law enforcement agencies. But some cops worked it differently, without duty belts.

Among the registered runners were law enforcement officers from all over the nation…in it to win it.

It was not necessarily the first-place finish —although that would be nice— but to raise funds for children battling cancer. Registered runners who happened to be justice officials pledged proceeds for the Cops for Kids with Cancer organization.

That’s the gist of it, and a great gist at that.

Getting back to that first-, second-, and third-place potential, there is a ton of prize money for winners in those categories. Since cops are professionally equipped to pursue things on foot, there was a decent chance to capitalize on that in addition to their $10k pledge. Mind you, this is all voluntary.

On April 18, 2022, marathoning police pledges made strides to bring in donations amounting to the ten grand, selflessly engaging in the big Boston event.

While law enforcement officers have been participating in the Boston Marathon through the years, the Cops for Kids with Cancer staff annually pay tribute to their former chairman, Massachusetts State Police Trooper Bill Coulter.

Per the Cops for Kids with Cancer website, “Bill served on the Massachusetts State Police for over 45 years, achieving the rank of Detective Lieutenant. He was a member of the Massachusetts State Police Commissioned Officers Association. Bill was a longtime cancer survivor and passionate about Cops for Kids with Cancer, where he was the Chairman at the time of his death.

“[Bill’s] other passion was physical fitness, completing over 20 Ironman Triathlons and 150 marathons, including 36 consecutive Boston Marathons and every Disney World marathon up until his passing.

“Many runners ran virtually last year to raise funds in his honor. This year we are able to once again run the live race on the course. With fewer numbers allotted due to Covid restrictions, we have to work even harder to achieve our ambitious goal.”

Helping with that ambitious goal was a runner who once wore a t-shirt with the words “State Police Striders” emblazoned across the front. His name is Kendall Bennett, the nephew of Detective Lieutenant Billy Coulter.

“When my Uncle Billy, a Detective Lieutenant in the Massachusetts State Police and the Chairman of Cops for Kids with Cancer, passed away in the fall, I knew immediately that a marathon was in my imminent future. I consider myself to be so lucky to raise money for the charity that he was so passionate about by running the race he was so passionate about, the Boston Marathon,” said Mr. Bennett. Policing and running runs in the family 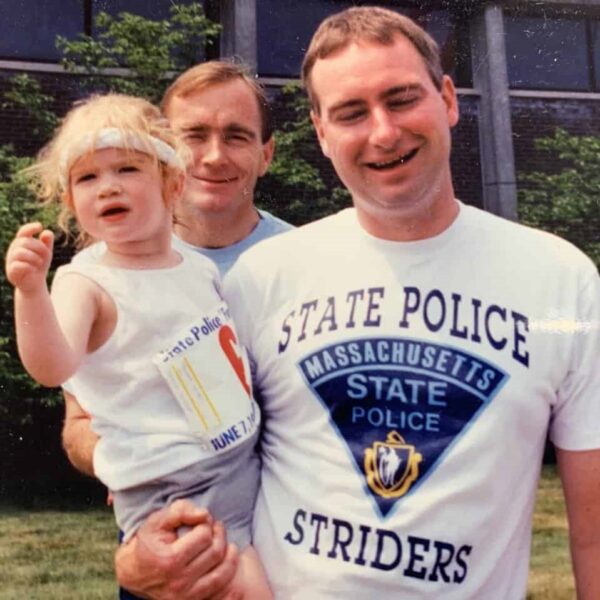 (Photo courtesy of Cops for Kids with Cancer.)

Policing and running runs in the family. Quite noble.

It should come as no surprise that cops are disciplined in the realm of physical fitness, many clocking miles on their own time, engaging in foot pursuits off- and on-duty (personal and professional mindsets).

The topic of physical fitness among cops is testimony to how imperative it is in a profession that expects Teflon-coated humans equipped with ninja-like superpowers. Just take a glimpse at mainstream media networks and their utopian playbooks dictating how police work should be done, including disarming cops in some accounts. What, then…boomerangs?

Since we touched upon the subject matter of fitness, the Texas Department of Public Safety (DPS) is one example of police organizations fortifying the health and wellness of their law enforcement officers. The Texas DPS Fitness Wellness Unit is an “award-winning unit […] using a holistic approach to educate Commissioned and Non-Commissioned Personnel through Physical Fitness Classes, Nutrition Education, Sleep Education, and Resilience Training.

The Fitness unit consists of five personnel who “…travel around Texas and the surrounding states implementing [sharing] our testing module, and teach multiple group exercise classes each day at DPS Headquarters as well as the State Capitol Complex.”

That’s the kind of stuff required for great physical conditioning allowing sneakers to get plenty of traction time, and our first repeat runner exemplifies the ultra-discipline factoring into habits of health.

Sgt. Smith is one among many law enforcement officers who make a healthy habit of running the Boston marathon…

Donning a blue NYPD shirt from the 2015 New York City Marathon is Colleen Thompson, running yet again while also representing law enforcement: “Since 2013, I have run 8 marathons with Cops for Kids. I am blessed to be able to turn my passion for running into something that will help children who are fighting for their health. My fundraising goal is $10,000 with the hopes of raising as much money as possible to help kids who are fighting cancer. Any donation no matter the size is greatly appreciated and makes a huge difference!”

Here is where you can get a gaze at some other cops who were either repeat runners or first-timers competing in the Boston Marathon. 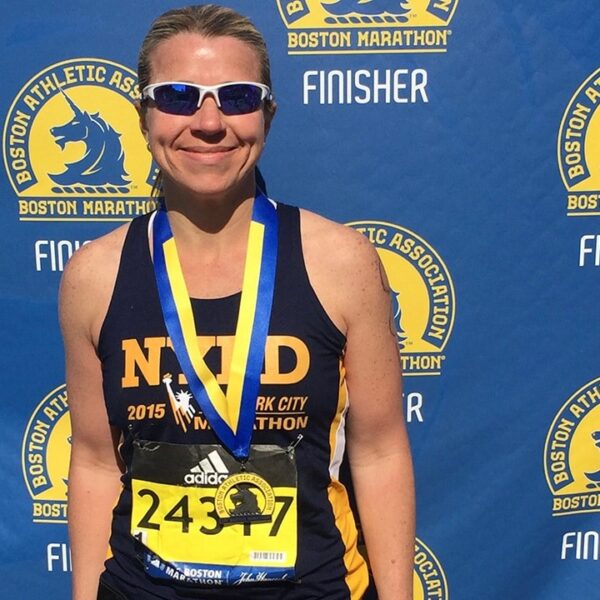 (Photo courtesy of Cops for Kids with Cancer.)

The 126th Boston Marathon attracted many cops, as usual. Each gave of themselves so that others benefit, as usual.

Above are just a few of the many police officers running to the finish line for a great cause, depicting a collective of cops all striding in the same selfless action. In this case, running forward to pay it forward.

“From all of us at Cops for Kids with Cancer, we would like to congratulate all the members of our CFKWC Marathon Team. We appreciate all your training, your fundraising, and the love you have for the children we serve. Your time and sacrifice are appreciated more than you know. Job well done!”