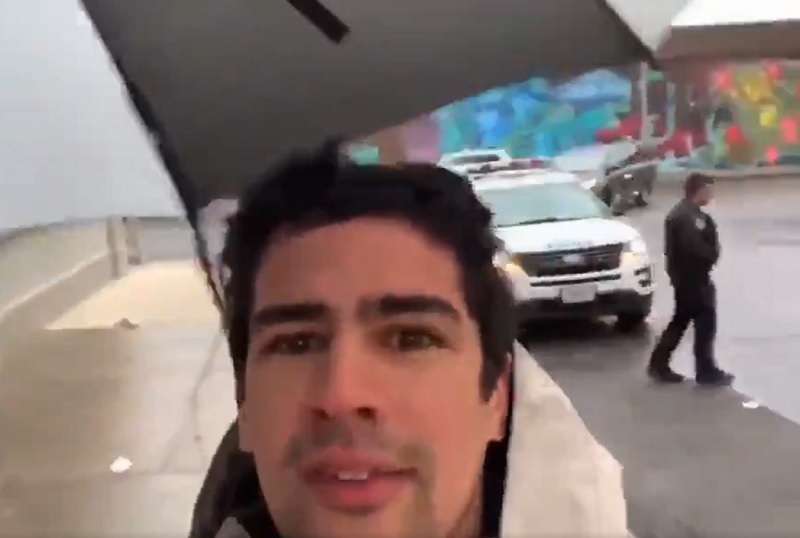 I just watched a video in a tweet posted by former NYPD cop and Secret Service agent Dan Bongino. The video contained one of the more visceral examples of the lack of respect police officers all over America are getting these days—and it’s only getting worse. I’m not singling this example out because it is rare; I’m using it because it’s becoming all too common. It’s just, in this case, the guy, Jonathan Baretto, was mind-numbingly stupid enough to record and post his idiocy on social media for all to see. 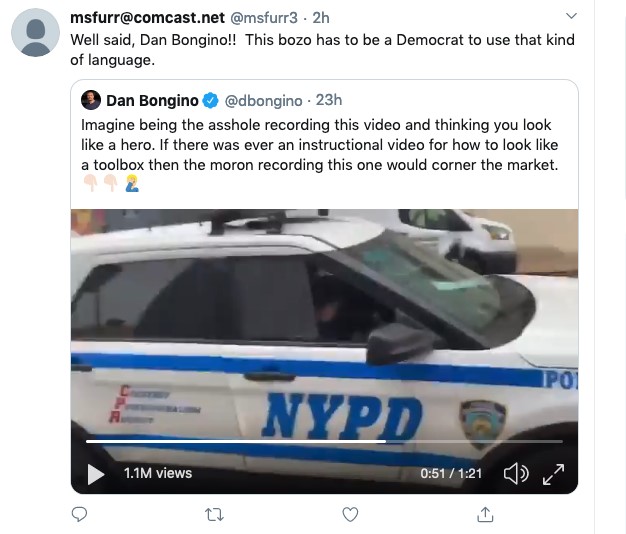 After a bit of research of Baretto’s political bent, he seems to share some affinity with the First Amendment Auditing crusade or perhaps even with the Sovereign Citizen movement. These folks, to one degree or another, tend to morph legitimate constitutional precepts and laws into a political fantasy where they feel they are not bound by the social contract and exist beyond the law.

They contrive incidents where they believe they can challenge “audit” by video recording and broadcasting the actions of public employees such as law enforcement officers. Baretto’s case in the above video is a perfect example, as in this case he pretends he’s upset about how some NYPD cops parked their patrol car.

Ostensibly, he says he was upset that, just before he began recording, the officers had parked in such a manner that blocked traffic. He believed the officers moved their car because he was looking at them. I’m sure they hadn’t even given him a second glance until he walked up and spoke to them. I use the term “spoke” loosely. He berated and insulted the officers with a foul-mouthed tirade.

Stories like this always remind me of an editor I worked with on my first book, Is There a Problem, Officer? I’d written about a driver who swore at me. She sent me back an editor’s note that she did not believe anyone would swear at a police officer. She wasn’t going to include the anecdote until I convinced her with several more examples. If swearing at cops was the only thing people did, I’d be thrilled. I hope she’s seen this video.

Every single cop in America has had to deal with this type of nauseating human being, likely, many times. My agency, the Seattle P.D., is known as the protest capital of America. I dealt with his kind of invective laced incivility many times. In fact, that city is so protest-prone I recall back in the early 90s we had demonstrators show up outside the precinct to protest the Navy conducting aerial bombing practice—in Puerto Rico!

One of my squad mates once showed me a dashcam video of a man standing in front of his patrol car haranguing him for not being “out there solving crimes.” The officer was writing an incident report. Did the guy care? Of course not. He just wanted to be “brave” and scold a cop. You know, make the officer’s day just a bit worse. The officer politely informed the man he was writing a report and asked if he could help him. The man just stared and eventually walked away.

Those cops in New York City also handled their verbal vomiting creep about as well as they could, these days. But you know that with every fiber of their beings they probably wanted to smack that churlish smirk off that guy’s face. I was only watching the video, and I did. In fact, I’ll bet a majority of non-cops would feel that same frustration watching that narcissistic sociopath spew his anti-cop venom at those officers.

As much as those cops, or I, or, perhaps, you would like to remind the guy he can bleed, the cops did the right thing. People should not disrespect them for being weak but admire them for being strong. Strength isn’t always measured in what you do but sometimes in what you don’t do.

Hauling off and popping the guy is easy. What’s difficult is to restrain the impulse to teach a punk like this some civility. But that is exactly what that moron wanted. Then Baretto could have sued the cops, the department, and the city. And he’d likely win and the cops would get fired if not prosecuted and tossed into prison.

In America, the disrespectful jerk is right. Baretto is exercising his freedom of speech. He’s exercising it in a disgusting manner. But he has the right to let the world know how much of an idiot he is. But the officers did not give him what he wanted, a shouting match or a violent reaction. Instead, the weasel had to skulk off not having provoked the response he’d wanted.

Some might argue that the officers could have arrested the guy, using some sort of disturbing the peace statute. They’d be technically correct. In America, there are probably still some places you could enforce that law. And if you can, have at it. However, in many of America’s leftist-run cities, New York City, Los Angeles, Chicago, Houston, San Francisco, Seattle, and Portland, officers are either tacitly discouraged explicitly prohibited from making such arrests. This renders those statutes effectively dead.

I can guarantee in my jurisdiction, Seattle, Pete Holmes, the city attorney, would never have prosecuted Baretto for his actions in that video. In fact, he probably would have given the guy the key to the city and invited the man home for a chat and to share a joint.

Rather than smack him or even engage the guy in a verbal back-and-forth, the officers gave him nothing but a polite, “have a nice day, sir.” Oh, how he must have hated that. But like him or not, at least he stands by his convictions. No way “the man” is going to stop him from… Oh, wait…. 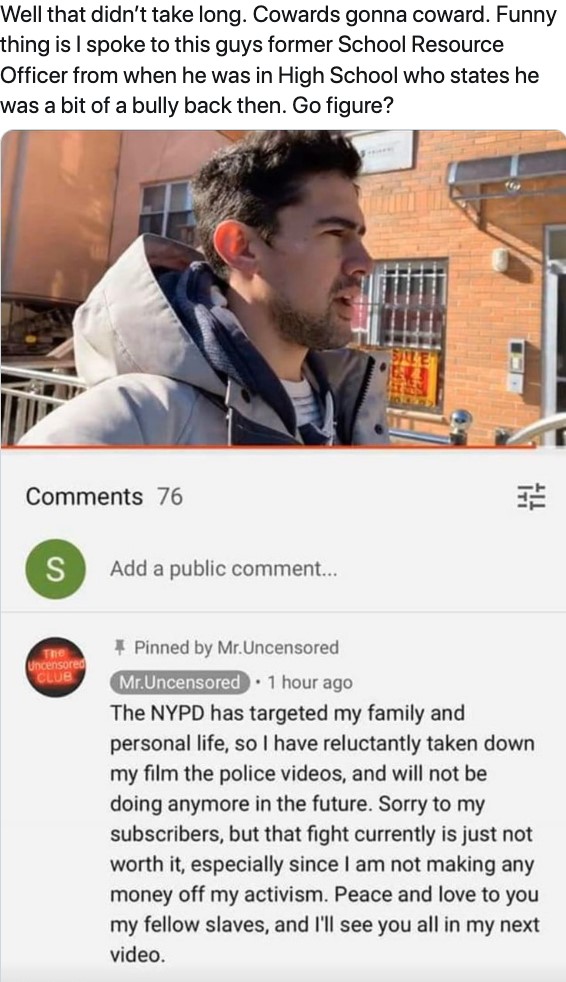 Sort of bit of an epilogue to conclude with. Back to Twitter, Baretto explains he will no longer martyr himself for his passion to call government out on its abuses. Blaming NYPD for “targeting my family and personal life,” apparently, his fight is “just not worth it.” Why? Because “I’m not making any money….”

Strange, our founding fathers pledged, among other things, their “fortunes…” for their cause. Baretto wasn’t losing money, or in danger of it; he just wasn’t making any. Alas, paper tigers wither, dry up, and then blow away.