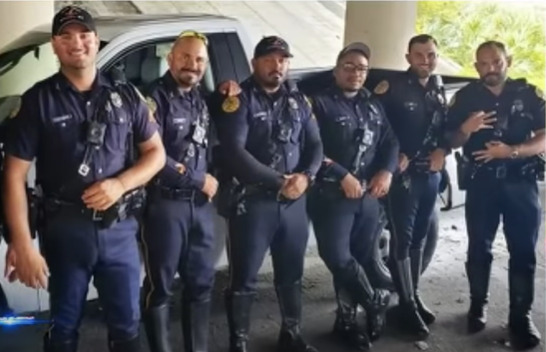 Cancel culture striking through what it doesn’t like. Finger-wagging based on nonsensical notions. Spewing hate for the sake of, well, knowing only hateful ways. Misery loves company, and we have no intention of holding hands with that fate.

Speaking of hands, a cop in South Florida is now suspended for gesturing with his hands what those in Misery Company claim is a symbol of hate.

For cops who happen to be Caucasian and using hand signals during official duty or in otherwise silly moments in the throes of pridefully enjoying life…claims of white supremacist symbolism sluice from corners of cringed mouths and are published by propagandist click-bait machines band-wagoning for profits—truth be damned. There may be a hypocritical police chief in this mix as well; we’ll knock on that door too.

Anti-police sorts lording over human communication cues want us to believe hand gestures infamously used by cartel gangsters and potty-mouth thugs to colorize their obscene and hateful ideologies are A-okay while any hand signal made by a law enforcement officer is to be taken as degenerative. Balderdash!

If anything is taken as degenerative, it is the proverbial “out of context” applications pushed as truth, resulting in blindsided slander, especially when it makes the news circuit.

The Gist of the Gesture

Recent reports insinuate a cop among five others depicted in a photo of uniformed police officers projecting a three-fingered hand signal with both his hands must be a white supremacist. The Miami, Florida cop was relieved of duty and an internal investigation ensued.

According to reporter Glenna Milberg, “Local 10 News first reported how City of Miami Police Officer Daniel Ubeda was relieved of duty while he was under investigation for a hand gesture in a photo posted to social media.”

Derived from various accounts via several South Florida law enforcement forums, the picture/gesture which was knee-jerked by a mind solidified in anti-cop concrete is one of unit pride and police duty designation—a Miami PD motorman unit (motorcycle cops).

Per the Miami Herald, Tommy Reyes, president of the Miami Fraternal Order of Police, “claimed the picture, which was posted on the Twitter account of [Officer] Ubeda’s commander and was removed within 48 hours, was a joke within the squad that refers to itself as the ‘B Shift Six.’”

Simple, valid explanation echoing the credo All you have to do is ask.

But no, not good enough for hatemongers who run with the political or exploitive football without using thinking caps.

The Herald article continued, citing, “But according to the Anti-Defamation League, the centuries-old sign for ‘OK’ was co-opted several years ago by racist groups as a sign representing white power.”

That seems to imply the A-okay sign our species has been accustomed to for eons is now out-of-bounds, because others say so. As an anonymous poster commented on a thread relevant to this story, “I’m just now finding out that an ‘OK’ hand symbol that was used for generations is now a racist symbol. Really?”

As a retired cop and freedom-loving civilian who drinks from the pool of peace, I’ll pass on the strongarming and virtue-signaling Kool-Aid.

A-okay is okay in my book, as is its derivatives and adaptations which got me through the dangers of police work unscathed due to simple gesticulations underscoring officer safety principles.

When turned upside-down, cops use this nonverbal communication to signal to backup officers on scene that a weapon is believed to be involved—the shooting kind. In police numerical code (throughout Florida, therefore Miami also), Signal-0 denotes a firearm is involved.

Police dispatchers receiving 9-1-1 calls reporting crimes are trained to ask basic/imperative questions in order to dispatch first responders and ensure officer safety. Confirming the correct address is paramount, equal to assessing if there are any weapons on scene, if known to the caller(s). If public safety dispatchers ascertain there is a firearm involved (affirmed or potential), they convey the Signal-0 code via police frequencies so that responding officers know to notch-up situational awareness.

This is one example of cops using hand gestures by training and/or anecdotal formulation. If not verbally, forming the hand in the shape of a zero means “weapon,” being discreet about that potential peril in their investigation. Again, officer safety…and the safety of all parties on scene is paramount and often employed in covert manner.

Bottom line: It serves no safe purpose to openly convey info which likely will fuel a suspect’s fight/flight options. Instead, stealth features understood by cops on scene preempt much of the fiascos which ensue when a bad actor has a beat on the reality that he/she may be going to jail.

Conversely, my squad (as did all others in my department, especially those on midnight shift when a cop’s eyes must remain acutely aware and undistracted) had a universal four-finger thumb-tucked hand code telegraphing the status of the situation. Otherwise known as Code-4 (cooperative driver; scene stabilized; no impression of danger) and downgraded as largely safe per the primary investigating officer, conservative communications remain vital, especially since any scene in which cops are investigating person(s) for potential wrongdoing can easily alter course and spiral horrifically.

Throughout their police careers, cops engender hypervigilance, the very real occupational necessity which many may not understand, one which is known to convey physiological wear and tear. As is often said in jest or otherwise, the traits and requisite characteristics for doing the police job never wane.

Law enforcement professionals heed every possibility, take everything into account, and remain responsible for all life in or around the scene where official investigations are underway, whether that be a “routine traffic stop” or much more tragic event where citizens defer to public safety officials.

Here’s another hand gesture example I deployed throughout my career working midnight shift, mostly during traffic stops. Whether backup spontaneously rolled up or I requested for additional units, upon a secondary (or more) officer walking up to the passenger-side of the car I stopped, I would steal a glance with the back-up officer(s) and use a finger gesture at the left side of my nose with my non-dominant hand (keeping primary/firearm hand free) to indicate I smell the odor of marijuana or alcohol.

Although that wouldn’t make me symbolic of white supremacy, it seems some out there in weirdo world would accuse me (and other cops deploying hand signals to get the job done discreetly/safely/effectively without brouhaha or perilous predicaments) of conveying hate for other humans. In essence, it’s showing investigative purpose…just not to the bad guys who may flip sideways if privy to the fact they’ve been had.

Some people wince when they hear the word “tactics,” as if that always holds a negative connotation. That word is often overused in dialogue where one individual accuses another of “tactics,” insinuating wrongdoing of another and skirting personal responsibility/culpability.

Well, we all know tactics are practiced skills invested toward achieving a successful objective for all parties involved. In the policing sphere, the often-criticized tactics are always bolstered by court rulings (case precedent) to enable cops to enforce statutes created by legislators on behalf of the citizenry—although criminals tend to be huge sore losers, the means justifies the ends.

Speaking of ends, we circle back to our topic today and the Miami policeman who some souls believe is a boogeyman because he used several of his ten God-given digits to communicate unadulterated symbolism and unit pride. Good for him, shame on them!

Makes me wonder: If that (or any) cop is seen giving a thumbs-up at a children’s lemonade stand, is he/she gonna then be accused of hitchhiking…in front of children?

Seems the words “interpretation” and “intent” reported in this senseless saga have been hijacked by accusers who may have run out of foil after a hat-making foray.

Revisiting the mention of a potentially hypocritical police chief and his involvement in this mess, indications arose whereby Miami police Chief Art Acevedo, Officer Ubeda’s boss who as of this writing has done nothing to abate the misguided suspension and internal affairs investigation over an accusation already dispelled by simple, logical explanation (police unit designation, so common in law enforcement), has himself displayed the three-fingers gesture when he was police chief of the Houston Police Department.

Per Herald reporter Charles Rabin, “The caption above the picture posted on the Miami Fraternal order of Police Twitter page: ‘Do as I say not as I do,’” implies it was A-okay for Chief Acevedo to use the same hand gesture…while standing by the suspension of Officer Ubeda and allowing the internal affairs investigation to proceed unimpeded. You can read about that nonsense in the Miami Herald report.

Incidentally, one of the ways I communicate to one of my children afflicted with autism resulting in non-verbal nature is via American Sign Language (ASL). The wonder of ASL cues affords a bevy of hand gestures and finger contortions facilitating communication between two or more people in an otherwise silent world.

Thus, this retired cop uses copious hand signals to reach my daughter (including the one Officer Ubeda used, in my case to signify “three” when corresponding with my child), as well as in active duty for others with whom I had contact during duty and recognized their silent world. Other cops in my department studied ASL also; as I often reiterate, cops are hugely resourceful on behalf of serving the public.

I am confident Officer Ubeda will be exonerated from the nitpicky nonsense of which he is accused.

The virtue of virtue signalers chronically targeting cops is just…too…much, making an already difficult job that much more arduous when subjected to slanderous tendencies and immature, erroneous, uneducated judgments!

And if we thought the nitpicky nonsense is nouveau nowadays, it was in effect back in the day, too.

The formal complaint I received via my squad supervisor stemmed from a motorist who declared (by phone call and, eventually, formally in writing) that my police cruiser lightbar’s red/blue illumination was “too bright” while I was conducting a traffic stop at around 2 a.m.

My agency operates one-officer per patrol cruiser, and the complaint gave me a breath of fresh air that the car’s emergency lighting system did its job. Taking swipes at police officers for doing what they are trained and responsible for is nothing new, and perhaps a fave pastime of those miserables we mentioned above.

Unfortunately, the shiploads of anti-cop sentiments nowadays shovels nasty nuggets into the mouths and minds of the miserables.

In conclusion, it boggles my mind that we have grown accustomed to poor political leaders signing orders liberating violent felons from incarceration…while we continue to carelessly pummel cops as if they are mere punching bags, a sure sign that some among us have derailed to a tenfold degree.