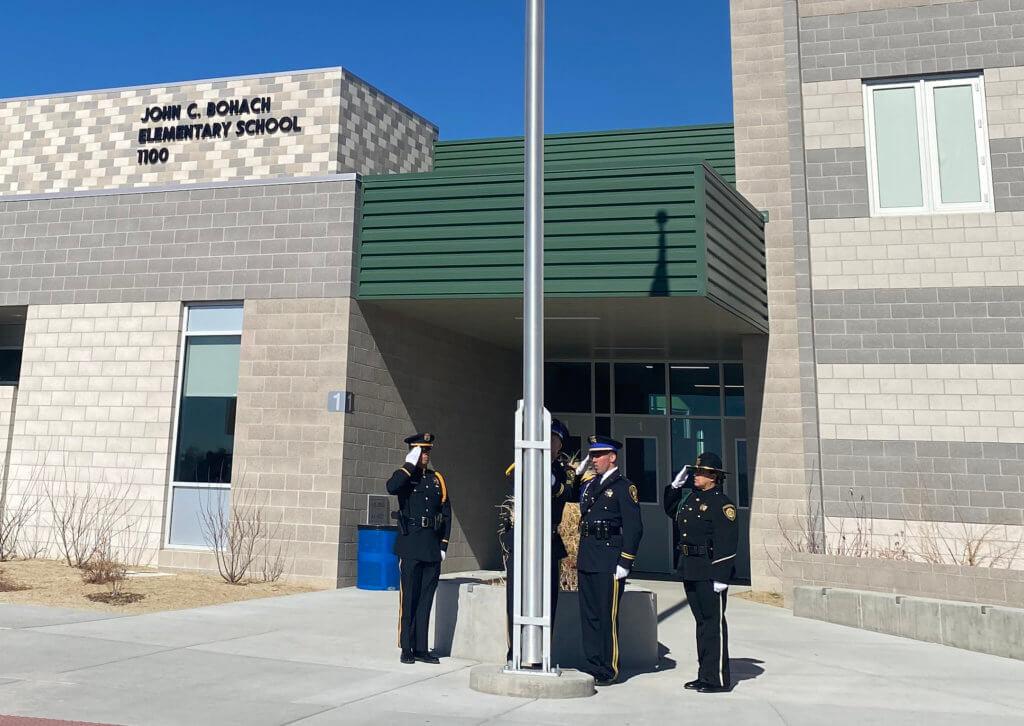 With the toppling of historical statues and the frenzy of renaming buildings in recent years, it is refreshing to witness the opening of a new school whose namesake pays tribute to a slain policeman and his indelible guardianship over humanity, predominantly our youth.

The approximately 800 students at the Sparks, Nevada elementary school in Washoe County view the name John C. Bohach, prominently posted atop the campus’s main building, every school day. In doing so, the children honor a fallen police officer who is fondly remembered for diligent duty and uncompromising compassion, especially for abused youngsters and families confronting grim circumstances.

Speaking of families, Officer Bohach’s loved ones and a bevy of friends worked tirelessly for 18 years to see to fruition the elementary school don his name.

To respectfully understand the embodiment of a man who served his community as a police officer and exuded A-Z virtues throughout a selfless career, we go a tad retro, leading up to one of the grandest gestures in which his legacy persists via the shaping of a brand-new school bannered by his moniker. 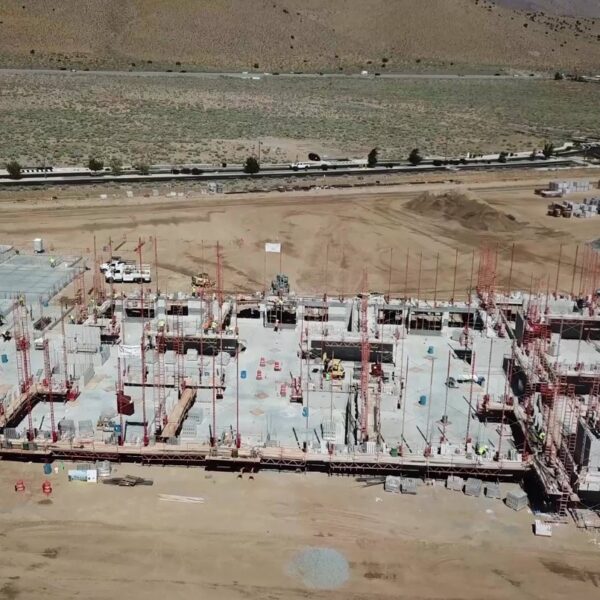 Following is a brief foray expounding upon the stature of a dedicated policeman who served as a Juvenile and Family Crimes detective for 13 years and impacted scores of folks in his community:

The impressive body of police work and unparalleled persona of Officer Bohach came to a tragic conclusion on August 22, 2001.

Per the Officer Down Memorial Page, “Officer John Bohach was shot and killed with a high-powered rifle while he was assisting other officers in setting up a perimeter outside a house following a pursuit.

“An officer had stopped a vehicle for a traffic violation. The suspect suddenly sped away and was pursued by another officer to the location where the man ran into the home at 964 Vassar St. As Officer Bohach assisted in securing the area, the suspect shot him in the chest. Officer Bohach was not wearing a vest at the time. The suspect was apprehended later in the afternoon after a SWAT team stormed the house.

“The 49-year-old [shooter] was sentenced to two consecutive life terms. He died in prison on October 6, 2013.”

Gone But Not Forgotten

In a piece titled “Honoring Families of the Fallen” published by the NPA in March 2022, Officer Bohach and his loved ones were duly recognized and honored, as anyone fostering humanitarianism with fidelity richly deserves.

We underscored the depth of Officer Bohach’s determined public safety prowess by availing the inaugural presentation of a brand-new elementary school bearing his name, in the same jurisdiction he served exceedingly well. 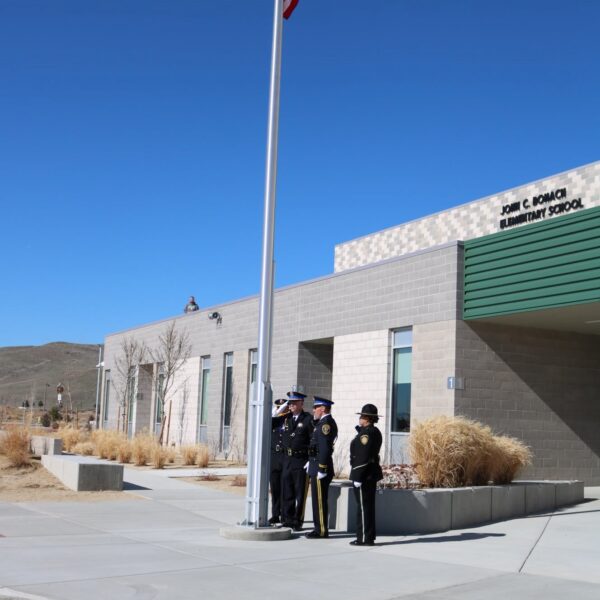 “In addition to the privilege of opening this incredible school named after the heroic Officer Bohach, I have become the caretaker of John’s story and legacy.”

Mr. Hughes came across our published March 2022 story, elements of which pertained to Officer Bohach, while “reflecting” on “John’s 21st EOW [End of Watch] anniversary” on August 22, 2022. 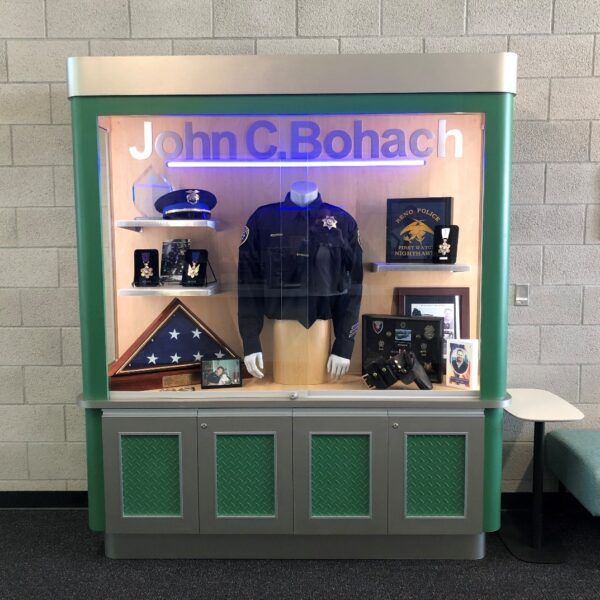 ”Our school does a lot more to honor LEOs and John than just bear the name on the outside. We have created an incredible display case, and artifacts, and made several films to instill a culture at our school that honors first responders and teaches students the importance of serving their community,” Mr. Hughes shared.

Culling through an abundance of material about Officer Bohach and the voter base supporting the Washoe County School District’s campus construction, I gleaned that this is the second of only two Nevada schools named after fallen police officers.

Among the school’s commemorative array, a metal plaque depicting a uniformed image of Officer Bohach is upon a wall, his name beveled in bronze, accompanied by a replica of his Reno Police badge, and captioned with, “It is not how this officer died that made him a hero, it is how he lived.” 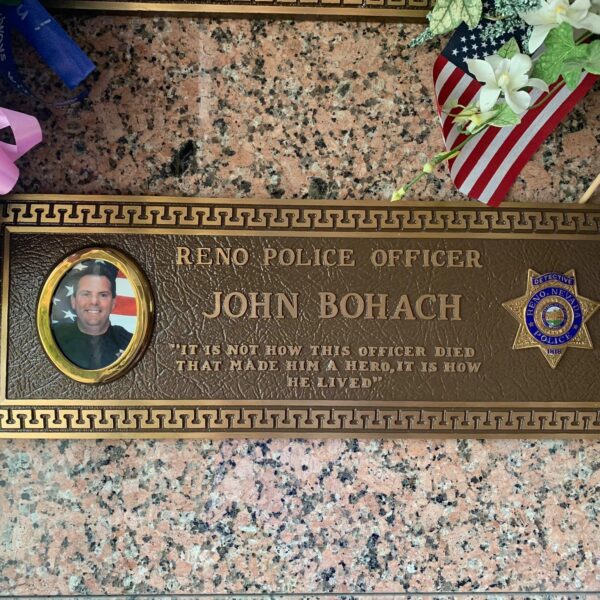 Indeed, how cops live and the character traits they exhibit resonate. In this case, two decades later. Now, the morning bell tolls throughout the school’s foundation, Nighthawks’ pride bolstered by Bohach’s watchful eyes sharpened supernaturally. As his daughter, Lindsey Bohach Sadler, said, “To the Bohach Elementary Nighthawks, may you forever soar high and make a positive impact on this community. You have a protector watching over you…” 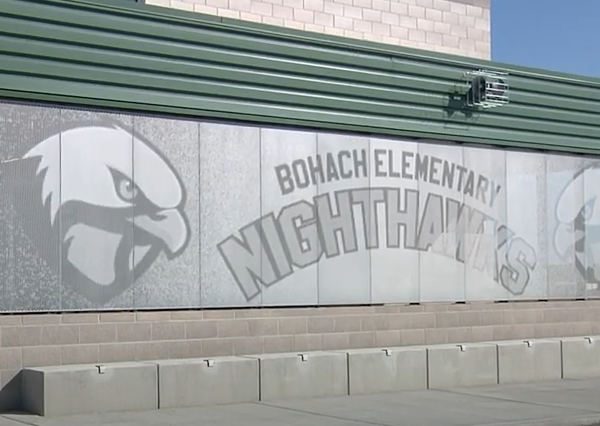 The school’s homepage encapsulated fond memories of Officer Bohach by offering sentiments attesting to his legacy as a law enforcement officer, particularly emphasizing his passion for working with children and families:

“Our school proudly bears the name of John C. Bohach, a Reno Police Officer who courageously served our community for 13 years. Much of his career was spent serving as a Detective in the Juvenile and Family Crimes Division where he worked tirelessly to protect children and families. As one of the few bilingual officers at the time, Officer Bohach helped bridge the language gap and served as a liaison to the Spanish-speaking community. Sadly, Officer Bohach lost his life in the line of duty on August 22, 2001.

“We continue to honor his legacy by instilling a culture of honoring first responders and giving back to the community in all of our students.”

It is quite telling…how a man, a forward-stepping policeman, lived when over two decades after his tragic line-of-duty death in August 2001, citizens in Washoe County, Nevada harbor his parlayed virtues in their lives. 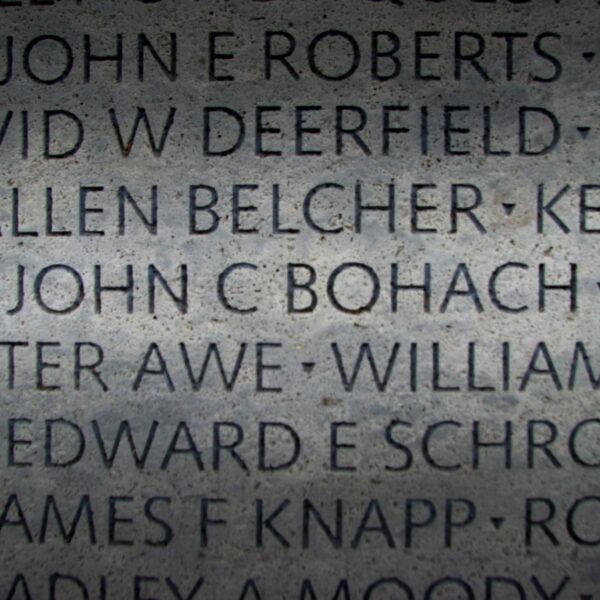 Etched in stone are the names of fallen cops who have selflessly enhanced many lives doing a job most won’t dare endeavor. Indeed, the dangers are starkly real and exhibit every sign of nightmarish persistence. Yet many LEOs step forward, engaging evil while exhausting efforts to safeguard innocents.

Those last few lines describe Officer Bohach to a t.

The birth of the John C. Bohach Elementary School is also a celebration within a celebration: Officer Bohach’s birthday, his 56th in March, is fondly referred to as “Happy Bohach Day.”

Mr. Hughes conveyed a central theme so direly needed nowadays, and that is to build “positive relationships with our students and our first responder community. Early on, before our first students ever walked through our doors, our school leadership made a collective commitment that, in addition to teaching a rigorous academic curriculum, we would develop a culture of honoring first responders and giving back to our community within all of our students and staff.

“Today we are beyond humbled to have law enforcement agency partners here to be able to join our students and highlight career aspects, safety, and a desire to serve the community that you folks demonstrate day in and day out.”

Particularly addressing the student body, Hughes said, “Today is the day our school will be flooded with heroes, and you will have the opportunity to learn about what they do, but most importantly, why they do it.”

Another method exemplifying the culture instituted at the elementary school is the presentation of the #1818 Award.

The award is given to students “for making our school and community a better and safer place for all. In carrying on the legacy of Officer John C. Bohach,” students who “embodied the example of a role model in maintaining both emotional and physical safety and displaying acts of compassion and kindness toward others” are honored with a

In a spiritual context, Angel Number 1818 is “reminding you that your guardian angels are your best friends. They will give you their support whenever you need it. They will also make sure that you are safe and protected.”

Reno Police Chief Jason Soto echoed how Officer Bohach “loved, loved, loved working with children and keeping children safe.” Among myriad reasons, it is undeniably apropos to name a school after this cherished policeman who especially championed the welfare of children.

Only two years old at the time of her father’s line-of-duty death, Jillian Bohach had to rely on others to share beautiful moments experienced by many lives, all spurred by a compassionate cop she gets to call her dad.

In closing, a brief speech given by Jillian at a ribbon-cutting ceremony one year ago contained the following poignant sentiments: “I appreciate the time and effort it has taken to represent details that highlight my dad’s life, his dedication to serving the community, and spirit of making the world a better place…” 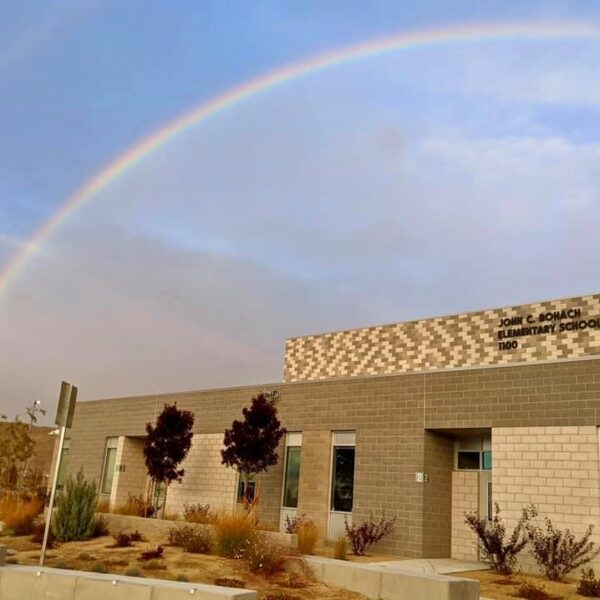