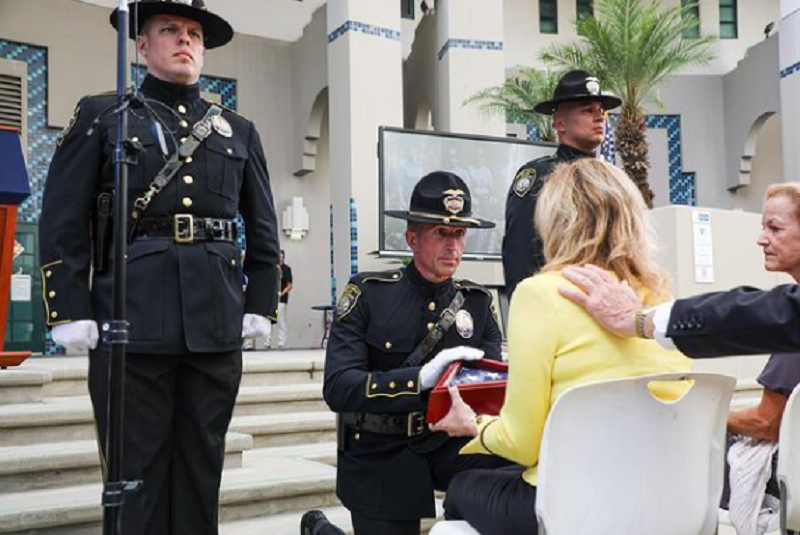 Ever look back at fallen law enforcement officers and wonder, How about their loved ones left behind?

Although it may not be highlighted on most legacy media networks (surprise, surprise), police agencies’ personnel and law enforcement-supporting entities, such as Concerns of Police Survivors (COPS), honor their fallen brothers and sisters by caring for their families in terms of being present, providing monetary assistance, assuming chores needing attention, celebrating milestones such as graduation and similar achievements, attending annual gravesite commemorations, and ensuring the ensuing life entailing chronic coping mechanisms is as stable as possible. Essentially, the same things cops have always done for each other in this life, on behalf of those who have gone to the next.

The relative icon symbolic of bonds between police families shattered by a line-of-duty death (LODD) and law enforcement officers readied to glue pieces together as best possible is the bestowing of the flag, as seen in our cover photo. The police presenter’s eyes (commonly the police chief or sheriff) emote the shared sorrow and telegraphs the covenant that the law enforcement family is forever in their midst, for the fulfillment of needs.

Even as years go by, rededications and proclamations in the name of the fallen transpire.

The Beverly Hills PD recently “celebrated the life of Detective Les Zoeller, where the City of Beverly Hills honored him with a proclamation and our Honor Guard conducted a Flag Presentation to his family.”

Det. Zoeller perished on January 3, 2002. Two decades later, in January 2022, his family was presented with the following to denote a lawman’s legacy: 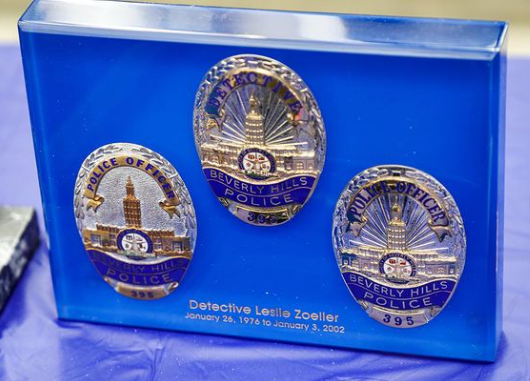 The encased three-badge memento represents a police legacy, ordinarily gifted to cops upon retirement, each badge marking milestones in their career. The Zoeller family harbors such a tribute in their homestead.

Although it is a trait in general, law enforcement officers and their loved ones steadfastly surround and support the families of LEOs who succumbed to mortal means sustained in the line of duty.

The latest LODDs are recorded by the Officer Down Memorial Page (ODMP), a place where loved ones left behind can visit and read inscriptions written by visitors honoring the family sacrifice.

Reflecting on the death of her slain police officer father, Janet Thompson wrote, “I understand the toll this job can take on the officers and their families. I was so proud of my handsome father when he put on his California Highway Patrolman uniform and badge. Until the morning I woke up to wails and sobs coming from our living room filled with people.”

The tradition at police funerals entails many factors detailing how law enforcement entities tribute their brothers and sisters perishing in performance of duty: Honor Guard, 21-gun salute, police helicopter flyovers, riderless horses, and other virtuous aspects are carried out with fidelity.

Perhaps one of the largest soul-tearing episodes encountered in police families is that of a death by suicide, the demons caked up by leading a life in law enforcement taking a tragic toll. Having been in those particular duty boots, parental portals reflect utter confusion. Fellow officers gird the depth of grief as best possible.

From Beyond the Badge NY, we glimpse at the sentiments of losing a cop this way: “The biggest thing you can offer any family that lost someone to suicide is love and support, not just at the beginning but through the whole journey; it’s not an easy one to navigate. Though this isn’t the way you hoped to gain new family members, were definitely glad you’re a part of ours now.” 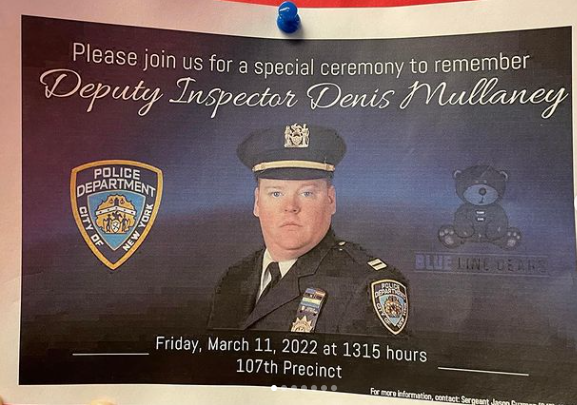 (Photo courtesy of Beyond the Badge NY.)

And the province of policing includes specialized cops who do their darndest to fulfill operational objectives with significant consequences to themselves, whose extreme duties tacitly invade the minds of spouses and parents and children back home.

All that we just covered is not exhaustive. The other vital component of cops fighting crime and providing the tenets of protection engenders non-speaking counterparts. We recently published perspectives on police canines and explained the monetary values of not only acquiring a service dog but also the upkeep in terms of general sustenance and veterinary care to assure optimal health.

As life goes, though, medical woes do arise.

Canines feel ill. Dogs have incredible pain tolerance and an endurance threshold which often masks a pending problem. With her permission, Raleigh Police Canine Officer M. L. Lyman shared with us a tragic ending of one of the department’s police dogs she was assigned.

So, in this case, the police family is the police.

From Canine Officer Lyman are the words of a cop in a family of cops commemorating one of their furry fighters of crime who became ill and passed away: 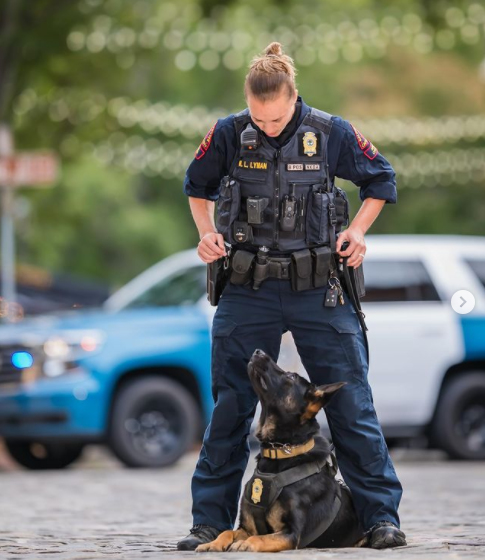 On March 15, “this sweet boy would have been 3 years old. There’s not a day that goes by that I don’t think about him and miss him. He was far too young to leave this earth, but I now know that his life had bigger meaning and purpose.

Remembered “not only [in] our hearts buddy, but the hearts of so many that honor you by the knowledge and awareness you have bestowed. I miss you the same as the day you left us and will aim to honor you and make you proud every day.” Bittersweet indeed.

My department suffered a loss of a sick canine. As mentioned, dogs can handle a ton of pain, keep pushing forward, tackle the tasks of the job, and barely show a hint of something amiss. One of our canines befit this category and, unfortunately, didn’t survive, even with vet care.

Police canines are not like family, they are family. In that context, after a police funeral was administered and burial was attended by the force, colleagues embraced the canine cop and his family at home, where the police dog resided when off-duty. Since mourning entails somber respite, and not much inclination to do anything (understandably), mealtimes were catered by police families. Property maintenance was completed (with as minimal noise as possible). Bills were taken care of. As mentioned above, these types of things among law enforcement cohorts are not necessarily publicized but occur routinely.

And when a police canine’s ailment is detected, the department facilitates requisite care. Canine-centric organizations typically assist with monetary donations.

While writing this material, the Retired Police K9 Foundation, a 501(c)3 not-for-profit organization “bringing awareness to law enforcement service dogs,” stepped up and offered funds for K9 Shelma’s medical care costs: “Program K9 Shelma is relaxing but unfortunately has been given some bad news and has been diagnosed with a terminal illness. Please help us wish Shelma some well-wishes. RPK9 will do what we can to provide for Shelma and the family during this tough time.” 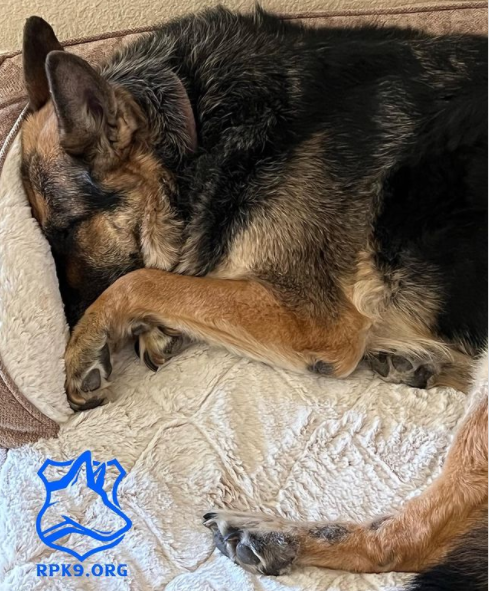 There is perhaps no more monumental way to honor our fallen officers’ families by having surviving loved ones in attendance at the charter opening of an educational facility titled after their family surname, solid and permanent.

From a Nevada State Police Highway Patrol spokesperson, here is the narrative describing the dedication for a Reno Police Department fallen officer:

“On March 11th, 2022, the Nevada State Police Highway Patrol was honored to take part in the first annual John C. Bohach Day at John C. Bohach Elementary School in Sparks, NV. In 2001, Officer Bohach, a Reno Police Department officer, lost his life while assisting other officers in setting up a perimeter outside a house after a pursuit. Officer Bohach served the community as an Officer with the Reno Police Department for 13 years.” 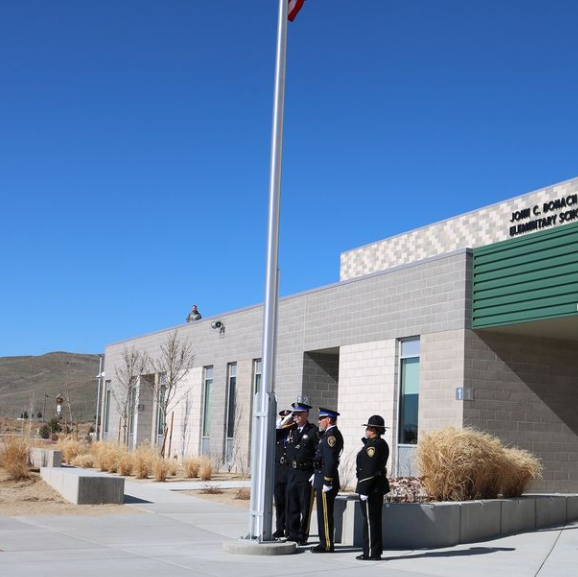 Enveloped by Reno and Washoe County area LEOs, the Bonach family was honored by this foundational gesture, infinitely complemented by scores of kids and their families chronicling educational pursuits under the Bonach banner.

Similarly, a squad-mate of mine who struggled through his last duty days due to debilitating illness was accorded a commemorative occasion by the police force, city fire services personnel, and elected officials. Then, a police chaplain orated words while a crew shoveled soil and submerged a seedling tree. A metal-engraved memorial plaque was staked adjacent to the tree. Within a few years, that tree grew tall and blossomed seasonally.

Annually, the department convenes and envelops the deceased detective’s family. Many introspective moments are invested on a nearby bench, the parents being filled with stories of how their son was a stellar cop, how he always wore a smile, how he was there for everyone without fail.

On March 17, the Naugatuck Police Department, highlighted by its Honor Guard, commemorated one of their fallen and her loved ones in attendance for the annual recognition of her line-of-duty death:

“On this day in 1991, Officer Nancy Nichols was serving the Borough of Naugatuck and was tragically struck and killed by a motor vehicle while assisting another officer on a traffic stop. Each year on the anniversary of her death, Naugatuck Police officers, past and present, come together with the family of our fallen officer, Nancy Nichols, to reflect and honor her memory. 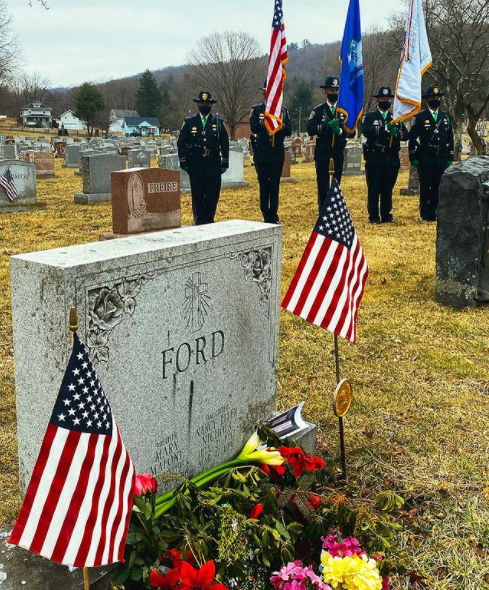 Sifting through the ODMP archives, here is the inscription offering the final dutiful act of Officer Nichols, and it happened to be in the context of backing up another cop:

“Officer Nancy Nichols was killed when she was struck by a car after stopping to help a fellow officer.

A Naugatuck Police spokesperson wrote, “Her sacrifice will never be forgotten.”

It is those last few words —never be forgotten— that are sacred and sentimental for police forces, reminding surviving loved ones that they are infinitely in mind, just as the fallen.

An odyssey illustrative of our topic today can be explored on the website of a personal friend whose husband, Officer Charles Kondek was murdered in the line of duty, his law enforcement colleagues and many from the community stepping forward to pillar the slain cop’s widow and children ever since tragedy befell.