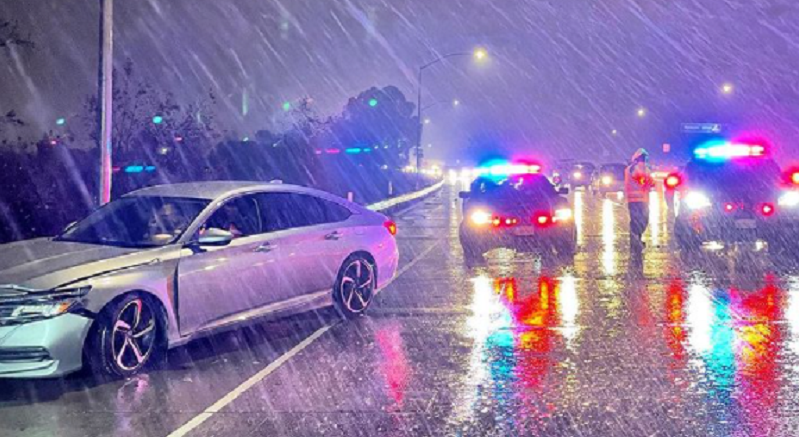 Law enforcement officers sign up, swear in, and hit the road. Duty-bound cops know of myriad uncertainties and train ad nauseum so that every possible predicament may be mitigated, paramount of which is preserving life—theirs and yours. The law that is designed to help protect and preserve police officers while they protect and serve others, especially on our ever-bustling highways and byways, is known as the Move Over Law.

According to the Florida Department of Highway Safety and Motor Vehicles, the presiding parent over the Florida Highway Patrol, “The Move Over Law was added to section 316.126, Florida Statutes, in 2002. The statute, which was originally introduced in 1971, requires motorists to move or yield right-of-way to emergency vehicles and in 2014, utility and sanitation vehicles were added to the Move Over Law.” Introduced, in 1971, legislatively enacted in 2002, and still requiring education and reiterations. 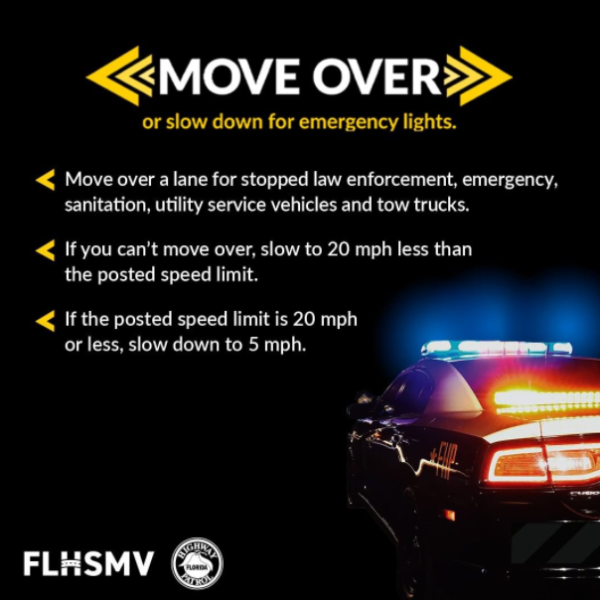 (Photo courtesy of the Florida Department of Highway Safety and Motor Vehicles.)

Written for public safety purposes, the statute is clearly defined and self-explained by its title: move over one lane or, if circumstances disallow that, slow speeds to 20 mph below the posted limit. Pretty straightforward, right? I think so. So why are our cops, troopers, and deputies being mowed down by motor vehicles? Same reason other saviors such as tow-truck operators and utility workers, also “protected” by the Move Over Law, wind up with headstones: Passive, distracted drivers.

Despite respective states’ departments of transportation unrelentingly advertising the Move Over Law, drivers continue to treat these public safety messages as mere mirages…until it’s too late and the school of hard knocks is an indelible lesson, assuming anyone survives. Law enforcement officers working our highways and byways are made martyrs while serving the population.

Electronic signage overhead flashes day and night, yet drivers blaze trails as if entirely alone on the lanes. PSAs breaking down the Move Over Law couldn’t be any more concise –again, the three-word statute title is the world’s easiest cheat sheet– yet some drive contrary to basic principles of heeding caution.

Looking at the Move Over Law since it was first instituted while I was working with a midnight-shift squad, the propensity for some drivers to blow by with a blind eye keeps making the headlines.

As mentioned, inattention is one aspect. Many of the avoidable crashes we see involve one other traffic violation leading to major wrecks: texting while driving aka distracted driving. Not watching the pathways because heads are devoted to social media feeds or scripted convos (It Can Wait campaign) culminates in many of the traffic tragedies for which the Move Over Law was designed to preempt. So, it’s primarily a people thing, ignorant of major disasters caused by a driver’s mindset being elsewhere, instead of operating a formidable force safely.

Police academies teach emergency vehicle operations (EVOC) on “driving pads” intentionally slicked with water/dish soap. As well, in-class instruction entails the engineering of motor vehicles, maintaining control during poor climate conditions, evasive maneuvers, centripetal and centrifugal forces, and a bevy of vehicle-related dynamics and considerations (including How to change a tire). It is historical that cops everywhere must be hypervigilant, an aspect which whittles away at human physiology and piles on mental weight; it remains that way, especially nowadays, with all the unhinged behavior perpetuated by a hands-off political party throughout 2021.

With all of these attributes factored into safe operations of police cruisers and any manner of emergency or service vehicles, the last one we just mentioned —changing flat tires for stranded motorists— is a proverbial double-edged sword. A police officer or trooper crouched down (defeats reaction time) switching out a tire may be focused on the fix-a-flat process and hoping a motorist piloting a multi-thousand-pounds projectile is doing his/her part. 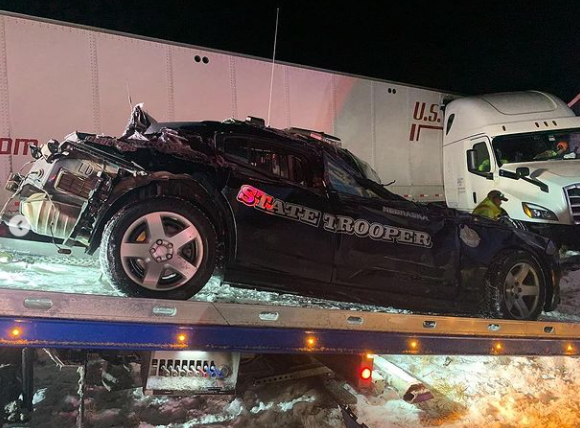 Part cop/part ninja, LEOs who fix flats are inherently distracted by the job at hand, relatively forfeiting safety typical protocols of always being situationally aware. They are; it becomes second nature. The common denominator remains: Safe motor-vehicle operations of others. In the context of cops bodily evading oncoming motor vehicles, some courses teaching tactical maneuvers directly relate to the bona fide ninja acuity, getting out of the way swiftly.

Sometimes the traffic-oriented cop narrowly escapes being killed, and the citizen’s car is the unfortunate target. A recent example involving a Colorado State Police motorcycle cop exhibits the depth of dangers and how a situation can turn ugly in the blink of an eye:

Incidentally, Colorado State Patrol reported a handful of incidents whereby drivers failing to Move Over through 2021 resulted in five cruisers being smashed. In each of these, no fatalities were reported.

Among the latest statistics involving law enforcers killed in motor-vehicle wrecks is in Massachusetts. State Police Trooper Tamar Bucci observed a disabled motorist and was preparing to render aid. The Massachusetts State Police offered the following synopsis: “Trooper Tamar Bucci gave her life in the line of duty last night when her cruiser was struck by a gas tanker as she attempted to drive up to and assist a disabled motorist. We are heartbroken for her loss. Trooper Bucci was 34 years old and assigned to the Medford Barracks. No greater love hath the person than to give her life for another.” 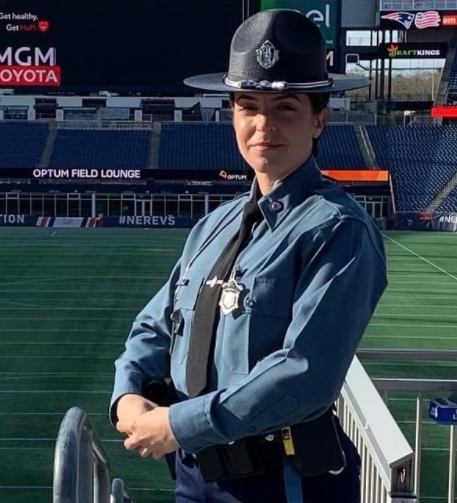 Trooper Bucci served on the police force for two years. Commemorations I came across mostly heralded Trooper Bucci’s verve for life and wanting to be in a position to help others. She was doing exactly that when killed by a tanker operator.

“She was an outstanding trooper,” said Lt. Marion Fletcher, Trooper Bucci’s station commander of the State Police Medford barracks. “It’s a hard shift for anyone, the midnight shift.” Per a Boston Herald report, the crash occurred at approximately 11:45 p.m. on March 3, 2022.

According to The Boston Globe, Trooper Bucci is “remembered for her passion for helping others and competitive streak” and manifesting her “dream job.” What was her main motivational purpose in becoming a state police trooper?

“She wanted to change the perception that police were the bad guys. She wanted to let people know they’re not — they’re nice people who take the job seriously and have a willingness to help people and to uphold the law. I think she was motivated by that,” said Pat Catino, Trooper Bucci’s prior fitness club employer.

Underscoring our topic today, after the tractor-trailer tanker struck Trooper Bucci’s cruiser, two Good Samaritans and a Stoneham police officer stopped to render aid. They pulled her from the twisted cruiser; the Stoneham cop began CPR. One may envision that cop’s valiant, concentrated life-saving efforts of jump-starting a human heat…while his own being knelt on the brink, exposed to the same dangers which led him to be in a position to save another cop’s life. It all circles back to ultra-responsibility of motorists sharing the asphalt.

The Officer Down Memorial Page (ODMP) adding Trooper Bucci among its 2022 line-of-duty deaths (LODDs) brings the total to 66 thus far, making her the seventh cop to perish on the roadways stemming from an automobile crash. Citing the LODD as still under investigation, other than him not sustaining any injury, details have yet to be divulged regarding the tanker driver and factors presaging the traffic tragedy.

One news report I read claimed Trooper Bucci was parked in the shoulder behind the disabled auto. However, the Massachusetts State Police News site explained, “Trooper Bucci’s cruiser was struck by the truck, a tanker carrying a full load of 10,000 gallons of gasoline, as she attempted to pull to the side of the road to assist a disabled motorist at approximately 11:45 p.m. The force of the impact pushed her cruiser, a marked Ford Interceptor SUV with its emergency blue lights activated, off the road .”

Everything Trooper Bucci was required to do by law and her agency’s policies —activate emergency lighting— opened the door for other motorists to Move Over or slow down. Overhead blue or red lights of an emergency vehicle are even more visible from the elevated seat of a trucker, thus telegraphing for the driver to commence either moving over one lane (at near-midnight, more likely than business hours) or slow down by at least 20 mph.

I culled imagery of I-93 approaching exit 27 in Stoneham, Massachusetts. It is four travel lanes wide, with an emergency lane on both sides, flanked by knee-high metal guardrails.

As alluded to above, any charges are pending a completed investigation being conducted by the Massachusetts State Police Collision Analysis and Reconstruction Section, Crime Scene Services Section, Commercial Vehicle Enforcement Section, and State Police Detective Unit for Middlesex County. These are specialized units highly trained to encompass complex data and mapping, arriving at calculated conclusions painting a picture of what happened.

In my police prime, our department’s Traffic Homicide Unit (later renamed Traffic Fatality Unit, since most were proverbial accidents). TFI officers had to literally traipse out in the roadways where life-ending crashes occurred, spray-paint neon orange markings which were measured and diagrammed on paper, photographed the scene from every conceivable angle, then return to Police HQ for long sit-downs and computations. Not owning a police helicopter, our agency exercised mutual aid agreements, borrowing flights in the sheriff’s office helos and photographing the scene aerially. (Judges and juries love pictures to illustrate details and inherent nomenclature of courtroom proceedings.)

“Every year far too many law enforcement officers, as well as emergency, sanitation, wrecker and utility service workers are needlessly injured or killed along Florida’s roadways,” said Chief Kenneth Albano, Temple Terrace Police Department and President of the Florida Police Chiefs Association. “Floridians can help keep themselves and our officers, first responders and other public service professionals safe by staying alert, vacating the lane closest to any of the aforementioned vehicles, traveling in the same direction, that are actively displaying any visual signals and when all else fails, simply slowing down to at least 20 mph less than the posted speed limit as you pass by.”

Personally, in my neck of the woods, observations are that most abide by the Move Over Law and adjust accordingly. Others seem oblivious. It takes just one driver to err and ruin lives of many in a single instance by not vacating the lane or reducing velocity with first responders fulfilling duties in shared space.