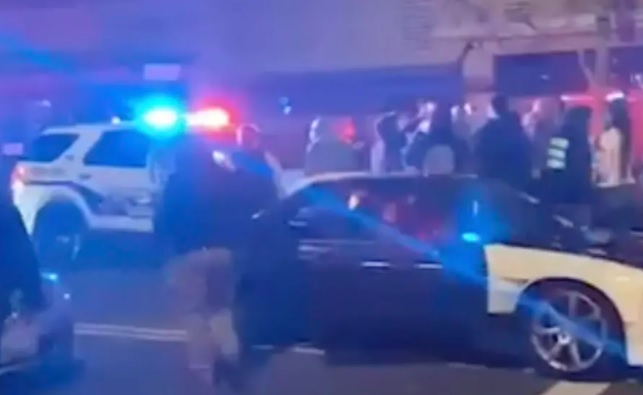 Sometimes the legacy media (local and national) are shameless with their inflammatory headlines. No… wait… all the time. The (Tacoma) News Tribune recently headlined, “Tacoma police car plows through crowd of pedestrians gathered at downtown street race.” The Tribune makes it sound like people were watching a sanctioned high school drag race night at the track and some officer, on a whim, drove into the crowd just because. They downplayed the extreme danger people in that crowd presented to the officer and made the police look as bad as possible.

Here’s a sober way of looking at the incident—Caution… this part involves critical thinking. After Tacoma Police responded to a reported illegal street racing incident in downtown Tacoma. Several cars were “spinning donuts” in the middle of an intersection. Watching the cars was a large crowd of people, some gathered frighteningly close to the reckless vehicles.

The Tribune reported, “The patrol car, surrounded by groups of shouting people, revs its engine and suddenly surges forward, striking the group and running over at least one individual before driving on.” Again, one-sided. I watched the same video but noticed other aspects this “newspaper” ignored.

When the 29-year, decorated veteran Tacoma police officer, Khanh Phan, 58-years-old, arrived, a crowd of at least three dozen aggressors surrounded his patrol car. They were yelling at him and pounding on his patrol car, refusing to get out of his way, and would not allow him to leave.

Pause… and think. The officer in that patrol car has very few options left to him if he wants to avoid injury or even survive. Remember, this is the Pacific Northwest. Riots and serious assaults on police are routine in major NW cities such as Seattle and Portland, which have become synonymous with the word, riot. Although less frequent, Tacoma is also on the Interstate-5 riot circuit. You’ll recall the attack on a Tacoma ICE facility by leftist radicals in 2019.

First, the Tribune ignores that initially the patrol car remains stationary as the crowd swarms and surrounds it. Then, the officer attempts to back up. That apparently was not an option. Though viewers cannot see what was behind the officer’s vehicle on the video, driving backward is almost always more hazardous than driving forward.

After slowly backing, people were still a major threat to the officer in the patrol vehicle. The officer reportedly revved his engine before driving off, which amounts to another warning to move out of the car’s path. Several people chose not to get out of somewhere they should not have been, and they were struck by the patrol car while the officer was escaping a mob.

Should the officers have responded as if this mob was about to get calm and instead offer the cop coffee and donuts? Should the officer have bet his life the mob hadn’t intended to break the windows and then drag him out and beat him? Maybe take his gun and shoot him? There are only two options when cops are in this situation: sit there and risk your life, shoot into the crowd, or drive away. Officers cannot bet their lives on some fourth mystical option cop-haters seem to believe exists.

There are several dynamics at work here. If the officer shoots at those attacking him, which would likely scatter the crowd, he might then drive away. Of course, shooting at a suspect in a crowd could cause collateral damage, people injured or killed by errant bullets. Officers are responsible for every round they fire, and they don’t fire “warning shots.” The other option is to drive away. The driving away tactic provides people in the crowd the option to move out of the way. I don’t know about you, but if I’m holding on to a car or standing in front of it, and it moves, I get out of the way. I’m weird that way.

Some people in the crowd refused to move, and a couple rioters suffered nasty consequences. Was the officers’ life at risk? Without a doubt. Similar crowds, showing an obvious lack of respect for cops, have often shown their tendency toward violence. It’s not normal for people to surround a police car and threaten the officer inside. Believe it or not, that still doesn’t happen in most of America. Remember, the call started because police responded to a report of people driving cars recklessly in an intersection near a crowd of people. These vehicles were putting people in the crowd at extreme risk.

Can you imagine what the Tribune would have written if the officer had done nothing if one of the reckless vehicles had lost control and careened into the crowd at high speed? I can see the headline now: “Cop stands by and does nothing, as reckless driver crashes into crowd of innocent pedestrians.” Something like that, maybe?

A friend of mine commented succinctly, “Fortunately the cop didn’t choose to be the next Reginald Denny.” For those that don’t recall or are too young to remember, Reginald Denny was the poor truck driver who was driving through the “wrong” L.A. neighborhood on the wrong day. The “Los Angeles riots,” ignited by a police use-of-force incident involving Rodney King, had just exploded.

Reginald Denny became the ultimate wrong-place-wrong-time allegory. After Denny stopped his truck (what turned out to be a crucial mistake), rioters dragged him from his truck and savagely beat him. He should not be alive. A special cruelty included the images of thugs prancing about as they struck Denny repeated in the head with several items. They continued to strike him even when he was unconscious, lying helpless on the pavement. Some of them even turned and gestured toward a news helicopter. Seems they knew they were being filmed committing attempted murder and were reveling in the evil of it.

Officer Khanh Phan was not about to become another Reginald Denny, which likely could have occurred. A large segment of society has so demonized law enforcement, how could any officer not react as Officer Phan did? Every day the political left feeds the public a feast of lies about law enforcement. Then the Left feigns outrage when officers must use force to save their own lives.

Where’s the concern for all the crimes those people committed and for their naked lack of respect for a law enforcement officer who arrived with their safety in mind? He didn’t ask for a pack of wolves to descend on his patrol car.

Let me ask you cop-haters something. What would you have done in that officer’s position? Wait… let me stop you, right there. I don’t need to hear your answer. Whatever you thought you would do “better,” it would not have worked.