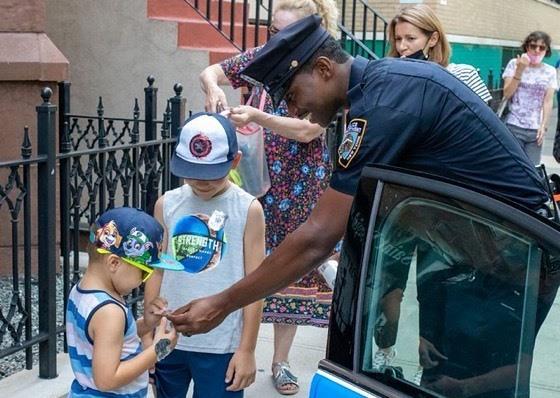 On Thursday, Florida Congressman Matt Gaetz took to the podium on the Hill during a hearing combing through several police-funding bills, and he unloosed what many public safety-minded Americans are thinking.

In a brief excerpt from Rep. Gaetz’s speech, he threw Missouri Rep. Cori Bush under the bus for her ongoing clamor to defund the police (even though she self-justifies spending gobs of cash for personal security). He also cast light upon the shadiness of New York Rep. Jerrold Nadler, pinning the federalization-of-police tail on the donkey. Specifically, Nadler waged federal dollars toward the NYPD; one can infer that comes with some strings attached, like an investor rightly declaring they own a piece of the organization.

Under the title Biden’s AG Moves to Federalize Police, Mr. Kaye offered, “…they don’t care about states’ rights. They want a big, bold, bad, all-knowing, all-powerful federal government. And they’re not gonna get that unless they can federalize the police departments.”

Candace Owens echoed, “I think what the left is after more than anything is the federalization of the police force […] Look at the American story right now, it is the exact same story that every country that converted from a capitalist thriving society into a socialist society. They need to federalize the police force to make sure that the federal government has the most control.” Ding, ding, ding…

And they dangle money to magnetize and mortar their ultimate plan.

As Mr. Gaetz clarified, he is for neither defunding nor federalizing law enforcement, explaining a far more mature and viable solution: Letting law enforcement functionality and utility be decided by the taxpayer investments in respective locales, whether it be municipal, county, or state-level public safety providers.

For example, while I was drafting a separate article having to do with several late-breaking life-saving feats performed by school resource officers (SROs) since the new school year started, Rep. Gaetz echoed how his congressional district constituents opted to vote in favor of paying additional taxes toward strengthening SRO contingents in the school districts in his representative region. Local-level folks know what their community needs and acknowledge the ideals of getting what you pay for.

How cool is that?

We all know how moronic and antithetical the defund-the-police movement is in society—an absolute abomination. One need only glimpse at the cold criminal frenzy permitted in liberal locales to verify the common denominator stemming from any type of anti-police construct flung from the left.

But the federalization concept comes with nuances beyond national perceptions…and a dig deep into the reeds is necessary. Esoteric? Yes. Thought-provoking, though? You betcha!

When we hear the phrase “federalizing the police,” we generally imagine a national police force like those in other nations. The United States has a bevy of federal law enforcement agencies (commonly referred to as “alphabet soup”) but we do not have a sole, countrywide police force responding to every single public safety complaint whether it be from townships, villages, cities, counties, or any of the states.

However, there is a little-known attachment that, if gradually seeped into the roughly 18,500 distinctly sovereign law enforcement entities spanning America, can amount to a national bind: Funding granted by federal authorities, with strict requirements.

Grant money awarded to police departments and sheriff’s offices always comes with uncompromising criteria that must be met. Said criteria ordinarily delineate factors that must be abided with for eligibility. Moreover, perfect compliance with the gov’s demands does not guarantee award disbursement.

After dotting every i and crossing each t, police agencies submit materials, cross fingers, and pray. Mind you, the federal funds are not infinite. Every posted grant requires its own grant submission. A law enforcement executive needing seven different pieces of police equipment to better serve its constituency can engender seven separate grant applications.

When my department’s wish list contained expansion of our traffic safety team (CST), we had to write a grant for funds to hire personnel, a grant for speed trailers, a grant for police cruisers, and a grant for specialized traffic enforcement equipment (emergency lighting).

Similarly, when police brass sought to enlarge the scope of our DUI enforcement specialists, a grant was scripted for roadside breathalyzers, another for additional training funds, and one also for hiring extra personnel.

Mind you, one solitary grant-writing expedition can take many months of aggregation, editing to perfection, and exhaustive follow-up…all in the hopes of being awarded.

Competition is prevalent, and not every law enforcement entity is granted federal dollars. Grant applications must be pristine. A scintilla out of place can result in denial.

The grant-writing undertaking is so robust and complex and time-consuming that, nowadays, agencies typically try to employ one or more civilians to research available grants, request the materials from the grant issuer (federal government), analyze and comprehend the language seemingly written by an attorney (they often are), line up all the ducks, complete the entire packet of oft-repetitive information, and send it in…

Conversely, if an agency is not quite up to snuff with the federal government’s dictates regarding grant proposal stipulations, law enforcement executives typically endeavor to meet the requirements for grant recipiency…meaning there is prep work before the real nitty gritty begins.

In the overall schematics, cop shops are doing what the federal government wants to garner funds to acquire police equipment, training, and related facets/assets for operational efficiency.

On that note, state-level grants are optional. Granted, the federal government allocates money to states for certain projects like interstates and U.S. highway expansion and refurbishment, but state tax bases can dole out monetary blocks as well. Given the spate of browbeating the law enforcement institution, resulting in an exodus of cops, Colorado recently announced grants to recruit new police officers and equip them accordingly:

Our local police departments and sheriff’s office planning bicycle rodeos for the youngsters are regularly subsidized by the county coffers, affording LEOs the opportunity to not only put on the events and instruct kids about bike safety but also gift brand-new bicycles, helmets, and such to the littles. Gotta love local input and investment!

On that note, unsolicited and unidentified granters commonly known as philanthropists also save the day. When Tazers hit the market, my agency executives were shocked to receive funds to equip every officer with a Tazer…with “training expenses” thrown in. Again, local input and investment…no strings attached.

Like any grant or source of sustenance, one needs only to research, specify the particular need, apply with elaboration on how it’ll enhance the community, and wait.

So, technically, we have largely been under the federal thumb, slowly inching along toward community-based monetary provisions for many of our local police agencies (as Mr. Gaetz underscored) to receive funds to operate more optimally. The trade-off is compliance with federal lawmakers’ demands, often too cumbersome and unrealistic. The police-funding bills we referenced above are majorly weighted with “police accountability,” implying We’ll give you money but you must do this!

This is not to suggest law enforcement anywhere ought to be free of accountability and measures of success. On the contrary, cops must be held to the proverbial high standards inherent in service and protection. It is the non-police minds, many of whom are anti-police bullhorns, which rock reality and betray authenticity, virtually dismissing what is best for a particular community they’ve never even visited. Cultural nuances are damned.

And that circles back to Mr. Gaetz’s premise. Homegrown funding toward local policing of community residents providing investment dollars in public safety severs the federal chains, and that is key to avoiding big government bureaucracy in our country’s mostly small sovereignties. Head-spinning need not apply.

As Tim Pool echoed in a podcast on Friday, towns and cities we never heard of were not immune from riots and destruction due to anti-police cohorts emboldened by the hateful rhetoric of the same lawmakers dictating “accountability” in these police-funding bills. That is truly head-spinning!

Where is their accountability?