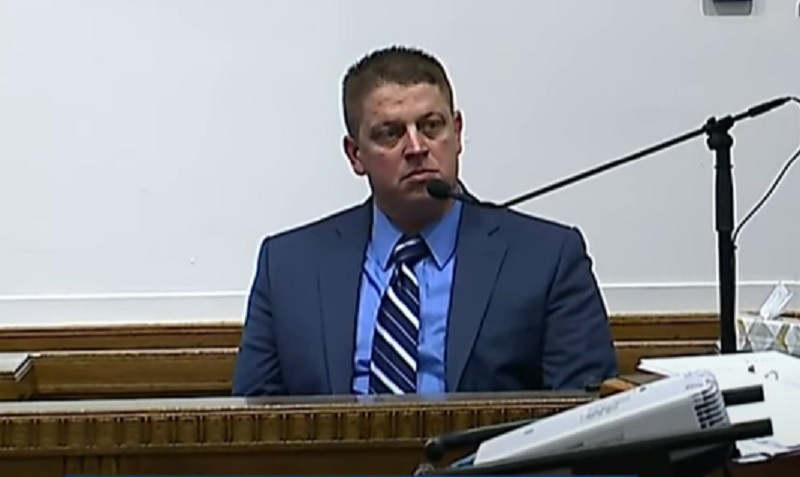 I remember when I was a rookie, a crusty vet told me that criminals would not be my biggest worry. He said it would be my own city’s leadership. He was talking about administrative BS, training BS, policy BS, and discipline BS. He was right.

However, another piece of advice I’d been given in the police academy is not proving true for too many officers. An instructor assured us “as long as you do your job honestly and in good faith don’t worry about getting into legal trouble.

Well, as we saw recently in Kim Potter’s wrongful prosecution, where everyone under the sun knew she’d made a dreadful but honest mistake (prompted by the illegal actions of the suspect), a jury found her guilty. They’d somehow manufactured a crime from a horrible error. Hopefully, cooler heads will prevail on appeal.

Speaking of appeals, a judge convicted 43-year-old Eric DeValkenaere, a former detective with the Kansas City Police Department (KCPD), on Nov. 19th, 2021, in the shooting death of Cameron Lamb, 26. However, after the verdict, Jackson County Circuit Judge J. Dale Youngs did something unusual.

Of course, as reported by KMBC, “Critics were outraged over the judge’s decision and accused the court of showing preferential treatment to the former detective.” The usual anti-cop “outrage” accompanies the leftist clamor any time an incident happens that conforms to their white cop shoots black suspect—for no reason—narrative.

Youngs ruled Det. DeValkenaere and his partner, KCPD Sgt. Troy Schwalm “‘should never have been on private property where the shooting took place because they were not arresting Lamb and didn’t have a warrant,’ according to KCTV.”

Officers may pursue a suspect onto private property if exigent circumstances exist. However, as if it were a game of tag instead of real-life cops and robbers, “the judge determined exigent circumstances did not apply, because the high-speed chase Lamb had been involved in shortly before the shooting ended when Lamb made to the private property and tried to back into a garage.”

Also, the judge had apparently been brushing up on his “escalation/de-escalation” literature as applied by anti-cop leftists. The judge concluded the officers “escalated” the situation simply by pursuing the suspect. This misapplication of escalation has also happened to other wrongly accused cops.

In June 2021, the NPA covered a case where prosecutors were attempting to prove the officers caused a suspect’s death by pursuing him into a garage and not providing him an avenue of escape before he grabbed a weapon. I thought cutting off a criminal’s escape route was the point.

Anyway, as with the DeValkenaere case’s second-guessing officers’ actions, Bond v. City of Tahlequah, has moved from the U.S. 10th Circuit Court of Appeals, which overturned the lower court’s decision against the officers, to the U.S. Supreme Court.

SCOTUS will be asked to decide if the “objectively reasonable” standard should remain or “whether judges should use 20/20 hindsight to evaluate if officers’ “pre-shooting conduct” “caused” the deadly use of force.”

Judge Youngs seems to have skipped ahead of the justices. He said DeValkenaere and his partner “were unlawfully on the property that they were both escalating a situation that previously had de-escalated, and that their actions created or exacerbated the risk.” Is the judge saying it’s de-escalation if the suspect escapes but escalation if the cops try to catch him?

On Dec. 3rd, 2019, former Det. DeValkenaere and his partner Sgt. Schwalm answered a call involving a possible domestic violence incident. Reportedly, an argument between Lamb and his girlfriend had allegedly become physical.

A police helicopter had spotted the suspect driving a reportedly stolen red pickup truck, speeding, and chasing his girlfriend who was driving a purple Mustang. Reportedly speeds got up to 90 mph during the chase and was heading into oncoming traffic, according to Law Enforcement Today.

It seems the officers believed they had reasonable suspicion that the suspect may have committed a crime. It also appears they could argue probable cause for reckless driving, driving a stolen vehicle, and possibly DV assault.

The officers pursued the suspect onto private property. They believed they had exigent circumstances to further investigate and possibly apprehend the suspect when they saw the suspect attempting to hide the vehicle in a garage.

The officers reportedly approached the suspect from “opposite directions,” in plainclothes but wearing ballistic vests emblazoned with “Police.” Then, Det. DeValkenaere said he saw Lamb point a gun at Sgt. Schwalm.

The Kansas City Star reported DeValkenaere fired four rounds through the windshield, striking Lamb with two. Reportedly, following the shooting, Lamb’s hand was dangling outside the truck window and a gun was found on the ground.

“Eric did what any reasonable officer would do,” defense attorney Dawn Parsons told the court, according to The Kansas City Star. “He shot Mr. Lamb to save Troy’s life.” I’m sure Sgt. Schwalm agrees.

Prosecutors argued the officers violated Lamb’s Fourth Amendment rights by going onto private property without a warrant. What? If you make it to “base” and you can’t be “tagged?” How nice for criminals.

In another one of those, “who cares,” moments, prosecutors also “alleged that Lamb, who was right-handed, only had partial use of his left hand due to a prior injury, according to The Kansas City Star.” Okay, I’ll say it. “Who cares?”

Orthopedic surgeon David Clymer testified Lamb would have been able to use his left hand to fire the weapon. Good for the defense, but so, what? How were the cops supposed to know any of that at the time? How is that relevant to the case? The only thing that mattered was if he had a gun.

“Hey, buddy. Before I fire my gun to prevent you from shooting my partner, can you tell me if you have any disability that would prevent you from using that hand to shoot the gun you’re holding?”

Assistant Prosecutor Dion Sankar stated, “The state of Missouri finds it absolutely unreasonable that he did this with a loaded gun,” Sankar declared. “We find it unreasonable because there was no reason to enter the private residence with a gun because there was no pressing reason pressing him to move. That was his choice.” Hey, prosecutor: all cops have “loaded” guns. Not much use if they’re not loaded. Spoken like someone who doesn’t like guns and knows nothing about firearms.

Once again, judges and prosecutors have months and years to consider an officer’s decisions he or she had only minutes or mere seconds to make. Once they were on the property, was the Det. supposed to say, “Oh, crap! I’m on private property. So, I have to let this suspect shoot my partner?”

This seems to be nothing other than second-guessing police officers’ actions. The judge and prosecutors disagree with what the officer did in good faith. So, they make what happened a crime because they think they would have done things differently. Maybe they would have, but they don’t know, and it doesn’t matter. They’re not cops, and they weren’t there.

There were the obligatory accusations from the anti-police factions that the cops had planted the gun. Wow! What a plan. We’re supposed to believe a 20 year, “highly decorated” veteran police detective used this random DV and reckless driving incident just so he could murder a black man and then plant a gun? It should be noted that reportedly the girlfriend said it was the suspect’s gun but that he kept it inside. Okay… But that was until he took it outside.

The judge was even more egregious, explicitly ruling this was not self-defense because “they [cops] were the initial aggressors during the incident.” It’s as if the possible DV assault, stolen vehicle, reckless driving, eluding the police, and drawing a weapon on a police officer did not amount to being an “aggressor.”

Anyone else think if Lamb had gotten away, he may have continued searching for his girlfriend, whom he’d reportedly already assaulted? I can imagine the accusations if the suspect subsequently killed or seriously injured her. Why didn’t the cops arrest him when they had the chance?

Jason Johnson, president of the Law Enforcement Legal Defense Fund, issued a statement. “Jackson County Prosecutor Jean Peters Baker’s politically motivated prosecution sets a dangerous precedent. Police officers are not above the law, but they are entitled to be held to the same standard as all citizens, not one based on political expediency.”

Politically motivated prosecutors have infected the American criminal justice system over the past decade or more. Prosecutors, juries, and judges second-guessing police actions has become a crisis. Listen to the statements made by prosecutors, and you can hear the venom in their comments about the accused cops.

The judge could sentence DeValkenaere to “a minimum of three years on each charge” and “a maximum of 15 years for the armed criminal action offense…,” which would be served after the manslaughter sentence.

And, once again, Lamb’s supporters have elevated him to virtual sainthood, as if he were minding his own business when a white police officer shot and killed him for no reason. The original reported DV assault and the alleged stolen vehicle, reckless driving, eluding the police and pointing a gun at a police officer just fade into the partisan mist.