Skip to content
‘Dear Officer: #WeNeedYou’ Cards and Letters of Gratitude Showing Up on Police Cars 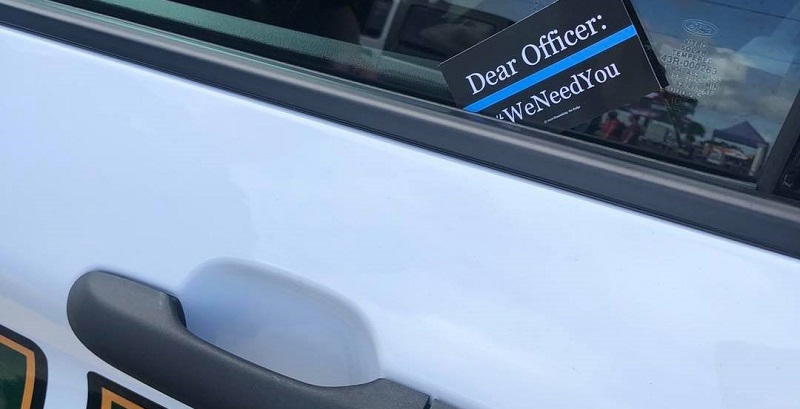 In a topsy-turvy upended world thanks to nasty cousin COVID and nightmarish anti-police actions which keep assaulting our psyches, it is an absolute blessing to witness a series of supportive “Thank you” letters and specially printed business cards emblematic of the Thin Blue Line and the words “Dear Officer: #WeNeedYou.”

Much like our beloved nation’s law enforcement officers who lace up duty boots and do the job and move from call to call, with no expectation of limelight whatsoever, citizens are assuming that same modesty by emplacing hand-written stationary with personalized inscriptions laden with heartfelt sentiments and support for our beleaguered cops.

Among the Newport News Police Department (NNPD) in Virginia, a state whose legislative authorities recently torpedoed the heck out of cops’ rights and officer safety by creating new laws largely antithetical to how the job is/can be done, a policewoman came out to her assigned patrol car to find a “Dear Officer: #WeNeedYou” card tucked into the driver-side door frame (displayed in our cover photo).

In kind, the NNPD site conveyed gratitude to the anonymous person(s) who placed this motivational devotional on one of their officer’s cruiser: “On Thursday, Officer Burwell received a nice surprise when she returned to her patrol vehicle and found this note on her window. Thank you to the person(s) responsible for leaving this kind message.”

In Florida, a Highlands County Sheriff’s Office (HCSO) deputy working at a large-scale public event came out to find a “Dear Officer: #WeNeedYou” card stuffed into his door-window frame:

The HCSO site acknowledged the anonymous/gratuitous citizen who took the time to send some love for our law enforcers: “Thank you to whoever left this on one of our patrol vehicles at the races!”

Some of the supportive notes left for police officers are born of anonymous people who eventually get to meet the cop they recognized and with whom they shared gratitude. The National Police Association posted such a story back in 2019, highlighting a citizen/nurse working at a hospital when several gunshot victims were rushed in, acknowledging the carnage cops confront as a matter of duty and acknowledging its toll on the soul.

That nurse, Bria Montes, left a note on Odessa, Texas police Corporal Gary Potter’s squad car: “You do not know me and I do not know you. But I thank you for your sacrifice. You put your life on the line every day to protect our community. I can not express how grateful I am.”

In organic human fashion some police poignancy evolved when the two met in person, chatted, and exchanged a hearty hug: “That one [note] on my car that day just, man, I needed it. I’d seen so much other stuff, but me and my family. My wife, my daughter, appreciate it,” police Corporal Potter told Ms. Montes.

Indeed, cops do not get into the policing biz for recognition or wealth or to dodge whizzing bullets for thrills. No, LEOs are a certain caliber of human, one which unfailingly and unhesitatingly forges forward when civility and decency somehow morph into anarchy and mayhem imposed by malcontents. It’s just how cops are, who they are, and how they are wired.

A police cohort of mine, nearing a quarter century as a LAPD policeman maintaining that Thin Blue Line even as his agency slashes $150 million from the budget (making cops do more with much less), summed up the general makeup of America’s cops. Yesterday, he analyzed the Mayfair Mall shooting in Wauwatosa, WI, and the inevitable police response despite anti-police din: “Despite being defunded, despite being marched against and despite taking rocks, bottles, and other projectiles during the riots first in Milwaukee and later in Kenosha, the police still raced to the scene, raced into danger and risked their lives for complete strangers because those strangers needed help. Why? Because that’s the type of people cops are.” No ambiguity, zero fluff, just pure unadulterated truth.

He’s talking as a human with focused eyes, listening ears, and a heartbeat which allows life and organic wherewithal/senses to distinguish between right and wrong…and a bona fide member of a society which relegates and consents the authority to deal with depravity when picture-perfect scenarios is someone else’s disdain. Cops are there.

On duty or not, his assessments are really no different than any other citizen’s capability to size up matters and opine on inexplicable events requiring pronto mitigation. (I underscore this paragraph because this very same policeman is under fire from his administration censoring his off-duty rights to free speech in relation to matters toward which he possesses the constitutional right to opine and declare. He filed a lawsuit in federal court this week, and the outcome of that represents the gambit of law enforcement officers who have been rather stifled when it comes to speaking on matters pertinent to them—especially lately.)

Thus, “Thank You” notes to counter the tsunami of anti-cop detritus are most welcome, whether it be personally inscribed letters or #WeNeedYou cards left on police cars or support penned upon restaurant receipts…tis the season to especially show gratitude as we relish the Thanksgiving season and its core meaning.

Although I worked just about every Thanksgiving holiday throughout my police career, I had the favor and fortune bestowed upon me when most folks with whom I happened to interact while on duty offered a handshake (COVID wasn’t a thing) or respectful nod or a polite verbal gesture or even a turkey leg “for the road.”

My squad sergeant’s family took us in annually —like a pseudo sub-station— with permission from the police chief to dine on turkey and traditional fixings at a police family table…reminding is to “monitor radio traffic” and beat it when help is summoned. (In the event you’re wondering about shenanigans requiring cops on an annual day of giving thanks, I can tell you there is always at least one drunk uncle who has to spoil the banquet. We respond. We counsel. We usher him home to sleep off his platter of turkey tryptophan washed down by booze. Oh, and burglars are notorious predators out and about when most folks are sedated by that pleasant dose of tryptophan.)

There will infinitely be a need for cops, no matter the day, inclement weather, and the context of someone requiring a professional mitigator who is on-call 24/7/365.

Although we do not get the opportunity to simply flip the 2020 calendar, bum-rush through days, and get it all behind us, we can nevertheless take solace that we’ve only a few more months to go…so why not Hallmark it with personal messaging letting our police professionals know they are fully embraced by many of us for taking up a challenging job wrongly judged by derisive commenters hoisting hate at every turn.

It seems a sad statement of the times we are living in/through, that we are compelled to launch a  #WeNeedYou campaign for crystal-clear heroes…but the naysayers having the only say is not what upstanding folks believe in and/or tolerate. Civilly, pro-police citizens know the safety of and solidarity with America’s police forces transcends their very own sanctity, thankfully so.

Most definitely, #WeNeedYou! And our friends at Humanizing the Badge are paramount in the card crusade diaspora. 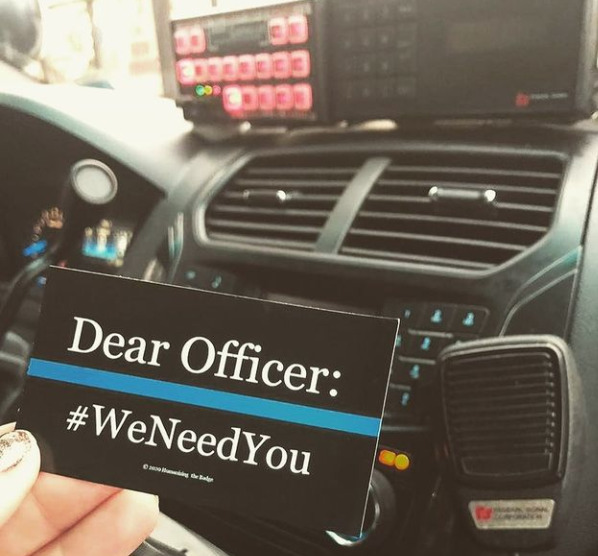