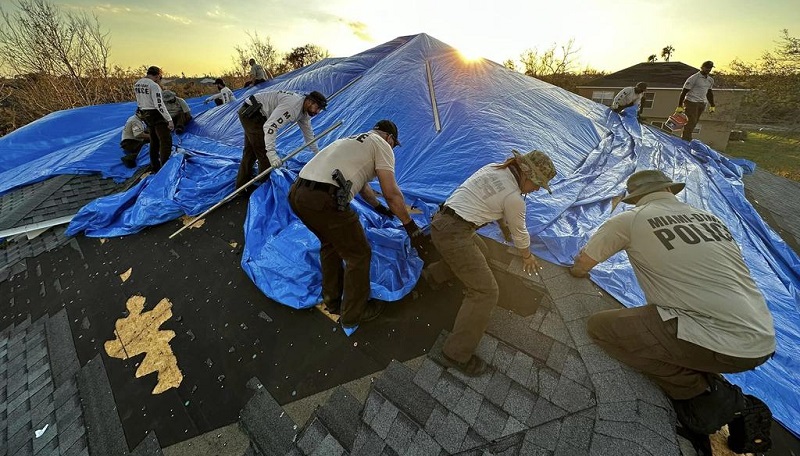 Down to the final nail driven into new frameworks and reinforcements of many SW Florida homes and businesses bullied by Hurricane Ian, multi-skilled cops rebuild foundations for the region’s future.

As the body count ticked upward, law enforcement officers from Florida and numerous other states looked ahead and got busy with roof repairs/replacements, an imperative in a land prone to hurricanes. Per the NOAA, we have until November 30, 2022, before we exhaust hurricane season. Yeah, it’s time to button it up, even tighter.

Bring the supplies and cops will build it solidly and according to specs, the craftsmanship of which is enough to make Bob the Builder blush.

Much as it is among our brothers/sisters working in the fire/rescue branches, police officers possess an extraordinary array of specialized skills and readily employ them for anyone who requires helping hands bonused by safety and security training.

In our department, we had a pool installer, a patio screener, a woodworker, a few electricians, roofers, a plumber, tilers, a mason, drywall installers, house painters, landscapers, welders, deck-builders, mechanics, and a bunch of others reading like a proverbial Angie’s List.

The proverb in policing is still accurate: No one goes into law enforcement for wealth. The other police proverb also applies: Cops wear many hats.

On their off days, cops engage in extra jobs and provide a service for additional wages toward securing loved ones’ futures. Many first responders have keen sights on craftsmanship, in addition to marksmanship.

The batch of 57 cops helping rebuild hurricane-hit municipalities in SW Florida is specially selected to engage in a range of restorative activities by employing unique skills. As the unit’s name implies, Rapid Deployment Force team members are ready at a moment’s notice and ship out with a zero-time-to-waste mentality.

“I am very proud of our brave officers who unselfishly answered the call to help those who were devastated by Hurricane Ian. They have volunteered to leave their own families to help those in need,” said Police Director Alfredo Ramirez III.

After the first RDF team deployed, arrived, helped search for bodies, and got busy with building efforts, they returned home on Wednesday, passing off the torch to a secondary/relief RDF group of cops. At this point, weeks after Hurricane Ian stormed in and out, so did squads of police officers. Post-disaster efforts continue as fresh faces and helpful hands of LEOs resume rebuilding in myriad ways.

Themed in “Serving Those Who Serve,” the Police Officer Assistance Trust (POAT) aided the specialized teams of cops rebuilding by funding supplies of wood and tarps and hardware necessary for restructuring bashed properties. They also transport the materials directly to the job site.

“POAT was founded under the auspices of the Dade County Association of Chiefs of Police in 1989 as a support organization for the local, state, and federal law enforcement community of Miami-Dade, Florida to assist officers and their families in times of need,” a POAT bulletin explained.

As per usual, police entities with foundations of a charitable nature extend their assistance beyond the blue-line scope mentioned above. In the case of Hurricane Ian reparations, supplies and police personnel were dispatched to aid residents saddened by near homelessness, reconstructing abodes and business establishments, all guided and approved by bona fide building inspectors.

Not only are gobs of cops helping residents and merchants rebuild their structures to return to some semblance of normalcy, but they also are tending to general responsibilities of the state, like downed traffic signals and signs typically maintained by the Department of Transportation (DOT). DOT crews get to problem sites as swiftly as possible. But life must go on…

A contingent of cops from the Tampa Police Department who volunteered to go to the hurricane-slammed region got busy re-planting grounded Stop signs and the like, helping to govern motorists.

No better staff to do so, since traffic signals of all kinds have traffic-engineered specifications, like how far from the curb and how tall a Stop sign must reach, ensuring the integrity of both aspects.

State statute books are ripe with traffic laws with subsections, under which are more subsections breaking down tons of particulars containing nomenclature having to do with traffic engineering and enforcement of violations.

If you ever happen to see a cop closely inspecting the edges of a traffic sign, they are essentially scrutinizing the sign for authenticity and good standing (pun) after engineers conduct “traffic studies” warranting traffic control devices.

Each traffic control device is serialized and recorded in state transportation departments’ archives. Upon every Stop sign, for example, is a unique identifier (normally etched on the reverse side) that chronicles when a device was approved after inherent traffic studies were completed (a requirement to justify the need for the traffic aid), where it is located, and the maintenance history of said traffic control.

Law enforcement agencies, typically on midnight shift —when vehicular traffic thins significantly— are fashioned to take note of deficient traffic signals (downed signs; flashing lights when they’re not supposed to be, etc.) and write up “work orders” to be furnished to the transportation department’s traffic signal division whose personnel respond in bucket trucks (to extend over traffic and repair traffic lights) armed with replacement parts, promptly getting the devices ship-shape.

As 24/365 monitors on the streets, cops are optimally positioned to take note before tragedy strikes due to an absent directional sign or malfunctioning traffic control light. Besides driver error, faulty traffic control devices can result in otherwise avoidable automobile crashes, especially when drivers do not honor motor vehicle laws directing cautionary measures (lights on the fritz, thus treating intersections as four-way stops). So cops recording vulnerabilities among a city’s or county’s traffic control mechanisms is a timely exercise to assure safe vehicular flow and fewer crash incidents.

I didn’t necessarily learn the esoteric side of traffic control devices at the academy; teaching traffic enforcement is a core ingredient for police recruits, and it is vast. Fundamentals are provided by the police academy instructors and honed while on the job.

Signs of the Times

It was at the monthly CTST meetings (held either at the Tampa, Florida regional office of the Florida Department of Transportation or next door at the Florida Highway Patrol post) that I expanded my traffic-related knowledge. Listening carefully during meetings and speaking to traffic engineers thereafter enabled me to be enlightened regarding traffic device particulars; never know when the need to know arises.

Citizens look to cops for all kinds of answers, so they may put on the proverbial engineer’s hat and deliver details.

(Traffic engineers at a World Traffic Safety conference in NYC.)

The image above is in a City of New York transportation department, depicting its abundant inventory of various traffic-related signs. My city had such a sign shop (the placard overhead read “Sign Shop”) operated by a crew with the transportation bureau. I toured it early in my career and learned the nuances of sign-making and the serialization method I mentioned above. That was my first exposure to traffic signal customs, dynamics, and DOT regulations governing instruments that are designed to maintain an orderly flow of automobiles and pedestrians.

That tour paid off well…

I had a few instances whereby we were called for certain parking violations, ultimately having to inform the complainant that the signs were not state-authorized or implanted by any government official, thus not necessarily enforceable. Rare, but possible.

For example, one time I pulled up to investigate a parking violation and found a light-blue Handicap parking sign (a color photocopy of an actual one and pasted on brown cardboard) propped up on a tar-stained neon-orange traffic safety cone—completely makeshift and presumably emplaced by someone who wanted to use that particular parking space for their needs.

Now the signs point us back to building anew…

Having served as a cop among voluntary relief teams during several hurricanes in Florida, I harbor the wonderful interactions we had upon meeting and helping residents emotionally paralyzed by the monumental notions of rebuilding. To jumpstart and/or finish hardy restoration projects and witness their wet eyes followed by tight-as-heck hugs…makes a cop’s career.

Each venture was cherished; I’ll take that any day.

Heck, cops even bring goods to go with the reboot endeavors, brought as close to the job site as possible.

It never surprises how deeply I miss an overwhelmingly gratifying profession, having worked alongside everyone who promptly reacted when the going got tough for anyone, especially those they didn’t even know.

In the eyes of first responders, things need doing and they are getting them done.