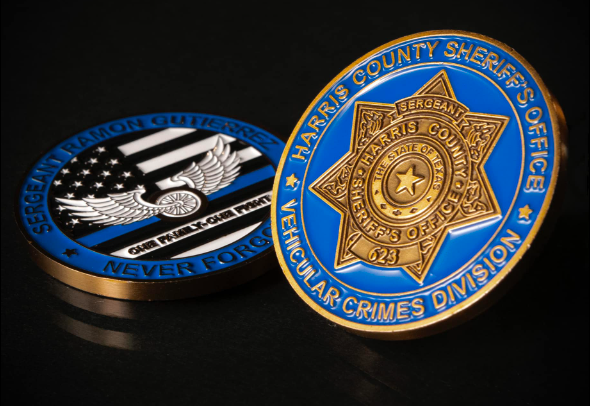 Just as the branches of the United States military grant a multitude of challenge coins honoring those who serve, so do law enforcement agencies gift the tokens of stewardship to cops.

Similar to police personnel exchanging shoulder patches as a gesture of recognizing each other doing The Job and all it entails, cops collect challenge coins and situate hobby-like displays to show off the assemblage of colorful medallions representative of public safety.

(Photo courtesy of the U.S. Department of Defense.)

The DoD News indicated that “Air Force Historical Research Agency archivist Barry Spink […] SAID HE’D BEEN TOLD IN THE 1990S THAT THE TRADITION STARTED IN Vietnam, whenan Army infantry0run bar tried to keep non-infantryman away by forcing ‘outsiders’ to buy drinks for the whole bar if they couldn’t prove they had been in combat. The ‘proof’ started with enemy bullets, then got a little out of control with grenades, rockets, and unexploded ordnance. So, a coin-sized item emblazoned with the unit’s insignia became the accepted form of proof.

“This tradition —also known as a coin check— continues today, hence it being called a ‘challenge’ coin.”

Given American law enforcement mirroring military principles and practices, hence the term “paramilitary” referring to our policing institution, the tradition carries on among those who typify the Thin Blue Line.

According to Embleholics.com, “…police officers use the coins to prove their allegiance when challenged. High-ranking officers and retirees often display a collection of coins in their offices alongside uniform patches and ribbons as a symbol of pride. The coins have always been purely about morale and commitment.”

Extending from the general shoulder-to-shoulder exchange of agency-centric challenge coins are police academies implementing the tradition well before any cadets graduate and hit the streets, sort of marking the tradition and indoctrinating others in its purpose.

More important, though, are the coins’ mutually understood symbolism of valuations to one another on the streets—a modern-day feat made more difficult and dangerous by antithetical notions of policing in America.

I mean, challenge coins do not necessarily take the blow of bullets directed at courageous cops, nor do they censor hateful rhetoric spewed at law enforcers…but those intricate designs of a personal nature among police officials are mainstayed as instruments of a noble profession and mementos to demonstrate camaraderie among cops. Although the designs differ, challenge coins typify trinkets for those who dedicate their lives to fighting the good fight.

The Hillsborough County Sheriff’s Office (HCSO) has a special program launched by Chief Deputy Donna Lusczynski, whereby deputies are provided a Chief Deputy Challenge Coin for going above and beyond in the course of duty.

Another iconic expression inherent in challenge coins is the personalization heralding heroes, name-saking them after fallen law enforcement officers who perished performing lifesaving duties. Coins are custom-made and marketed, with the aggregate proceeds provided to the fallen officer’s family as a token to help loved ones with financial impacts after such a tragedy.

When Tampa, Florida, Master Police Officer Jesse Madsen perished in his cruiser after intentionally driving a head-on collision course to stop a wrong-way driver, one of the department’s police dispatchers got busy with pencil and paper, drafted a few designs, searched for manufacturers specializing in challenge coin production, and selected one for the job. But first, she circulated some of those sketched renderings to ascertain the most liked…

The winning prototype has the words “Fear Is a Reaction” in raised letters atop the coin and “Courage is a Decision” embossed below, accompanied by a centrally positioned lion’s head with the Thin Blue Line branding draped across its expression. On the flip side is “MPO Jesse Madsen” followed by “EOW 3.9.2021,” encircling Officer Madsen’s Tampa Police shield displaying badge 507.

On the outer rim are the words, “The Wicked Flee When No One Pursueth, But The Righteous Are Bold As A Lion Proverbs 28:1”

The standout example was mass-produced and quickly sold out, necessitating production of another batch. All proceeds went directly to Officer Madsen’s spouse (a campus cop at a nearby university), assisting the fallen LEO’s family while also commemorating his police valor on a true-blue challenge coin.

“The money was raised through the sale of ‘Challenge Coins’ commemorating the 2015 manhunt [of violent escaped prisoners]. State Police Investigator Becky Finn spearheaded the project, selling over 1,000 coins.

“The Saranac Elementary playground project was chosen as the beneficiary of the proceeds because of how [significantly] the school was impacted by law enforcement presence during the manhunt. In addition.”

In Jan 2021, the sheriff’s office said, “It is our hope to have the memorial completed by December 2021. We have memorable mugs & challenge coins available for a donation. Please visit our Fallen Deputy Memorial website for more information!”

Speaking of special purposes where challenge coins are a gratifying consideration for cops who work special events such as the U.S. Olympics and such, the Los Angeles Police Department (LAPD) had a commemorative coin fashioned as a one-of-a-kind icon, much like a famous painting traveling around the circuit for wider viewership.

“The 2017 World Police and Fire Games Challenge Coin has arrived. It has visited the LAPD Police Academy and LA Memorial Coliseum. It will continue its tour of famous Los Angeles landmarks. Where would you like to see it next?”

Pretty fine method of drawing attention to LA’s Finest and some of its jurisdictional hotspots, its unique coin making rounds and history.

When working a midnight-shift beat, it was a practice of mine to stuff the latest challenge coin acquisition in one of the spare change-like pockets sewn into my ballistic vest. Not necessarily fashioned to stop a bullet but to serve as a tacit tribute to the latest casualty of a cop who loved the Job and died doing it; I likened it to taking him or her out on patrol (spiritual guidance). I coupled a challenge coin with a gold cross given to me by my mother; both separately heat-sealed so as not to clank and scratch either.

Earlier, when I joined our agency’s police union, I was gifted our department’s general challenge coin. That started my interest in the behind-the-scenes collection campaign. I quickly learned many cops were doing the same thing. Bartering challenge coins grew among LEOs and became a ritual at police conferences, training ventures, and other gatherings where cops convened.

The state-held or national-level annual police memorials are hot spots whereby cops from all over stand together, offer solemnity for the fallen, pillar the police-family survivors, and exchange challenge coins. Each of these become heirlooms attained at the bittersweet grounds chronicling the legacies of police professionals slain in the line of duty.

In essence, especially at police memorial sites around the nation, cops bartering respective agency challenge coins is likened to handshakes from public safety aficionados who may or may not ever meet again (more than one meaning to that statement, sadly). So challenge coins are cherished for various reasons and remain indelible reminders of events and police-supporting persons.

Whether a recipient of a great deed performed on duty or in remembrance of a police hero who sacrificed themselves to salvage the lives of others, challenge coins emphasize diligent duty on the face of medallions, honoring the Finest in several renditions.

In essence, giving immeasurably more is minted in a small token of enormous valuation for selfless service.