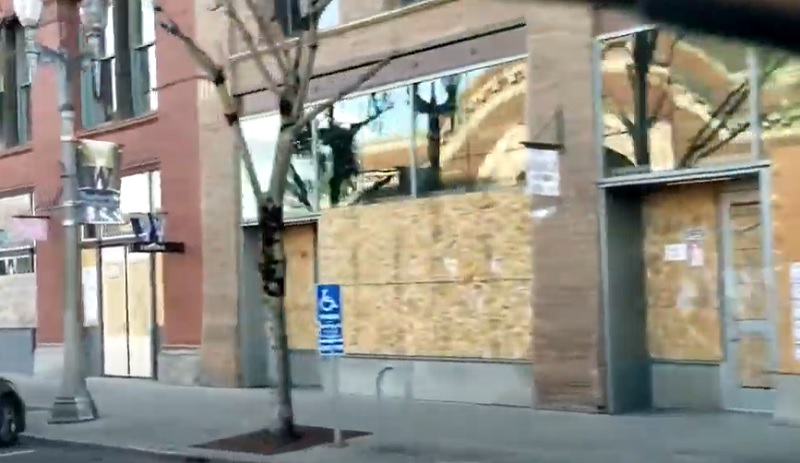 Dateline Portland, August 2021: “Portland business owners frustrated by vandalism, property crime as police say they lack resources” A reporter for Fox 12 news in Portland quotes a Portland Police Bureau lieutenant lamenting that PPB officers barely have time to respond to crimes against persons, and rarely have time to investigate property crimes. Reporter Audrey Weil investigated concerns about the lack of police response to criminal activity that is costing businesses in both property repairs and lost customers who may fear going out at night. When Weil related to the lieutenant that business owners are frustrated that vandals are getting away with their crimes, the official said the police are frustrated about it, too.

One business owner, whose restaurant window was shattered by an angry customer, spent an hour and a half trying to get through to the police on their non-emergency number. She also showed the reporter a surveillance video of a man smashing a car window with a skateboard. Getting something smashed used to be unusual, she said, and now it’s almost a daily occurrence.

Lt. Greg Pashley is quoted in Weil’s report as asking citizens to continue to report property crimes in order to show the need for increased staffing and funding. Pashley recognizes that a loss of trust in the police can result in persons giving up on reporting crime, resulting in a false statistical picture showing a decrease in crime. Crime statistics are almost entirely comprised of crimes reported to the police, so the “shadow” crime rate can be much higher in areas where citizens lose faith in law enforcement.

Dateline Minneapolis, August 2021: Business owner Ken Sherman says “This city is run by gangs. The only thing a bad guy is afraid of is a badder guy.” Sherman was interviewed by a local business oriented publication Twin Cities Business reporter Adam Platt. Sherman has run several successful businesses in the region for decades. He had already sold property in areas of town where he was losing employees who were simply afraid to be in the parking lots to get to and from work. Even sensing that the downtown area was moving in that sad direction, he invested in a restaurant. After George Floyd’s death, things got worse with the absence of police presence. Even off duty police hired as security would do little to intervene. Sherman now employs his own security detail. When people say they should call the cops, the answer is “what cops?”

Dateline Aurora, CO, July 2021: “‘It’s very worrying’: Aurora business owners concerned with rising violent crime.”  Fox31 news reporter Vicente Arenas spoke with caterer Dan Maranya, who stated that “It’s tremendously concerning. It’s very worrying .I started a new business this year, and we regularly visit some of these places that have really bad violence” including a murder in the parking lot of one of their grocery suppliers. Aurora Mayor Mike Coffman is quoted as attributing the crime problem to Aurora police in this Denver area city. Aurora police have been criticized over several high profile incidents.

Dateline San Francisco, July 2021: San Francisco’s Organized Shoplifting Surge Prompts Target to Cut Operating Hours. A change in California law and prosecutorial attitudes has resulted not only in Target’s retail operation closing down before dark in San Francisco, but major changes in operation by Walgreens as well. Other retailers are closing their stores completely, or simply moving out of California.

The bottom line to all of these stories, which are just the tip of the iceberg from similar events all over the country, is that property crime matters. When the FBI statistics are released every year the headlines are all about the most serious offenses. These are known as Part 1 crimes and include murder, aggravated assault, sexual assault, robbery, burglary, larceny, arson, and motor vehicle theft. Part 2 crimes garner fewer headlines and include lesser violent crimes and a host of other misdemeanors, including the property crimes noted in this article’s accounts.

Property crime affects consumers, homeowners, and businesses. The cost of goods increases with business losses and increased insurance costs. Offenders are emboldened and increase the frequency and severity of their crimes. Many property offenders are violent offenders also. Solving property crime often solves violent crime, which means that property crime that goes without a police response or reasonable investigation is a lost opportunity to stop violence. Politicians and activists who impede law enforcement by resistance, punishment, and cutting off funds are hurting businesses and individuals, and not just their wallets.