Skip to content
Bringing the Fight to Police HQ 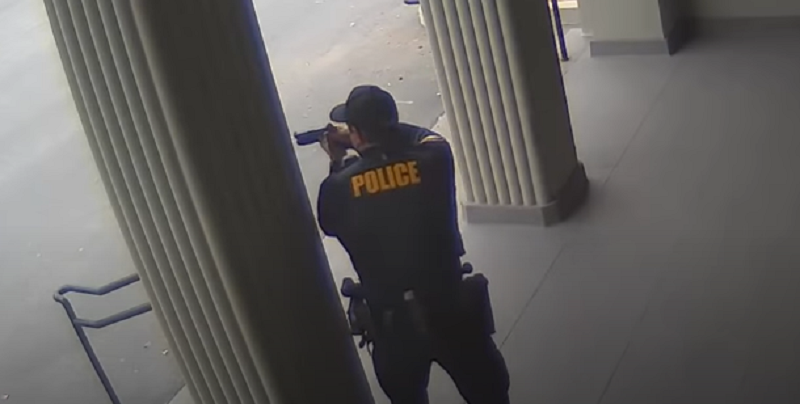 “Violence against law enforcement in this country is one of the biggest phenomena that I think doesn’t get enough attention,” adding that the murder rate for police officers is nearly “one every five days. Some of it is tied to the violent crime problem as a whole. But one of the phenomena that we saw in the last year is that an alarming percentage of the 73 law enforcement officers killed in the line of duty last year were killed through things like being ambushed or shot while out on patrol. … Wearing the badge shouldn’t make you a target.”

On April 10, 2022, a male walked up to the front doors of the San Diego Harbor Police Department and, via a call box, asked to speak to a police officer. As per protocol in any law enforcement agency, the police dispatcher’s responsibility is to gather information; the gist is to ascertain what the issue is and where it is transpiring.

Jurisdictional responsibility might be elsewhere if the complainant’s issue occurred outside the purview of the PD he/she walked into. As a dispatcher decades ago, this was not uncommon during duty; some people see the word “Police Headquarters” and assume any cop can aid them in whatever situation they are enduring. Succinctly, a police officer in Albuquerque, New Mexico has zero authority in Houston, Texas.

With that in mind, it is a dispatcher’s role to ensure the complainant has the correct agency of jurisdiction (ordinarily based on where the crime occurred).

In this case, though, neither the San Diego Harbor Police dispatcher nor anyone else knew the would-be complainant was the criminal and their police station was about to be the scene of a crime…against police!

Let’s look at one of the latest violent attacks on police officers at their cop shop, and how it went down (note the warning of graphic scenery and foul language at the bottom of the following video; as well, written narrative can be read at the top of the screen):

One can imagine if the call box outside a secured police facility was not there and the pretend complainant secretly armed with a firearm was permitted to walk inside and make physical contact with any person affiliated with the police department.

When I was sworn-in years ago, my agency had a questionable liberal policy in terms of visitors permitted relative freedom to enter, walk mostly unimpeded (other than secured areas occupied by different police divisions), and come in close contact with both sworn and civilian police personnel in hallways, elevators, stairways, and open-air reception-desk windows. Being the new guy, I said nothing…but it always weighed on my mind to be extra vigilant and cautious in my own police home.

A commenter replied to the San Diego Harbor Police station ambush video, saying, “We let people walk in our districts like it’s McDonald’s despite having shootings in our buildings.”

Illustrating the above points and concerns of vulnerability is the following shooting which occurred on April 11, 2022 (same day as the San Diego Harbor Police ambush included above) inside a Milwaukee Police Department station:

It took an unimaginable tragedy to effect change in the casual nature of our police department complex: The toppling of the Twin Towers on September 11, 2001.

By the end of that fateful day, our city government swift-approved all expenses to situate whatever was necessary to secure police headquarters. Massive concrete barriers were placed directly in front of the main auto-open doors, plopped in each of eight drive-up parking spaces. Glass windows were reinforced. Surveillance cameras were already installed at the front entrance. On the ground-floor, public restroom use was 24/7/365.

Oddly, our entire fleet of varying police vehicles was against one side of the general-use parking lot.

All that has since changed.

Nowadays, no general population is permitted within the police complex unless escorted by a sworn member and pertinent to official police business such as a criminal investigation.

A call box is now outside the front doors of police HQ, just like the one employed by the San Diego Harbor Police Department.

My agency’s call box is effective to a certain degree, just like the San Diego Harbor PD’s.

Like the San Diego Harbor police force found, it has value and purpose…but it also has limitations.

A few years ago, a squad-mate of mine was working the street beat when he was summoned into police HQ to assist a woman who wanted to speak with a police officer about something menial, offering very little info (just like the armed ambusher in the video above, who provided scant background to the police dispatcher).

The female “complainant” used the call box and was told to wait until an officer was called in from the streets. She sat on a nearby bench overlooking a small garden of plants and florals. Her burka draped down and to her sides.

Police Officer D. Kelley was summoned and arrived within minutes.

In mere seconds after he introduced himself and asked how he could help her, the female sprung up and lunged at him.

With a relative distance from the attacker who brandished a butcher knife she had shrouded under her burka, Kelley created further distance and flanked to the side while unholstering his firearm.

He moved backward as she forged forward, her blade slicing the air. She continued her trajectory at him.

He commanded “Drop the knife!” several times. She refused. She kept advancing while wielding the blade, intently targeting his body.

Out of the camera’s angle, both wound up in the nearby parking lot.

The assailant folded to the ground. Along with other police officers who were already in the lot, Kelley applied medical aid. City fire/rescue responded. The assailant succumbed. The surveillance system recorded the initial moments of the ambush (as did Officer Kelley’s body-worn camera).

When Officer Kelley joined our agency, he was fresh out of the United States Air Force where he spent a long military career as a K9 handler with the Security Force. After probationary time with us was up, he transitioned into our K9 unit. For several years, I worked with him and his canine on a midnight shift, often volunteering as the padded foe when training the police service animal.

Had Officer Kelley had his police K9 that day, at that moment, the knife-wielding woman either would have lost an arm or the dog may have suffered slashes.

The secured police precinct and its call box saved many other lives working within the law enforcement facility.

As mentioned in the video above, the armed female assailant decided to go directly to police headquarters to try to murder a police officer? She was avenging the arrest and conviction of her brother who was investigated by federal agents for ties to ISIS and acts of terrorism.

In the attacker’s mind, it seemed any police officer was a target…and she knew exactly where to hunt.