Skip to content
Bridging the Gap Between Cops and Their Leaders 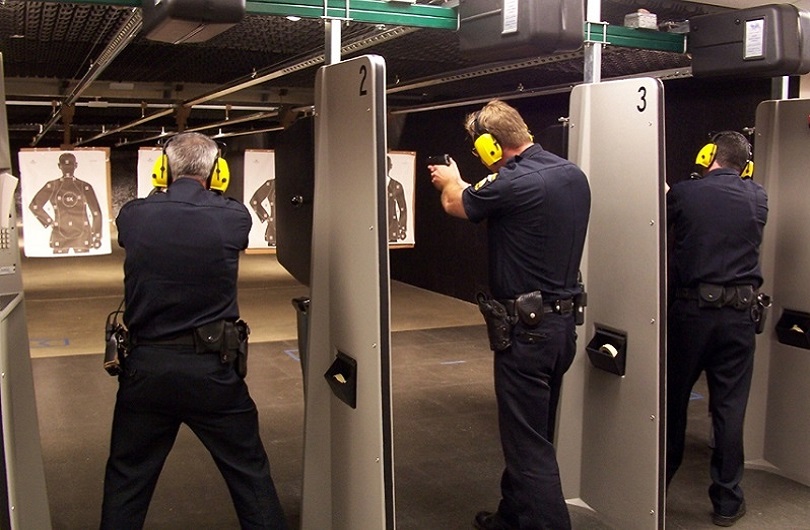 Everyone knows about the antagonistic environment too many police officers work under these days. We mainly hear about the struggles between cops and anti-police individuals, groups, politicians, and those conflicts caused by poor or negative reporting by the media.

But there may be nothing worse than the antagonism that exist within the cops’ own agencies between them and their chiefs and sheriffs. This disconnect can be cavernous and, come to think of it, at times, even carnivorous.

When anti-cop community activists, media, and politicians criticize police officers that prickles. But it can be agonizing when the town’s top cop-critic is the top cop. This is especially true if the boss has risen through the ranks.

One problem with police leadership is most police chiefs are political appointees. Mayors choose them not necessarily for their leadership abilities but for their willingness to toe city hall’s political line. Sheriffs elected in liberal, urban areas may also suffer from the same leadership flaw.

I remember every time our city went through a police chief selection process, we officers knew the more we supported a candidate, the greater the chance that candidate was a goner. In the case of former Seattle Police Chief Kathleen O’Toole, officers had a generally positive—with some notable exceptions—view of her tenure.

But when Chief O’Toole publicly supported her officers against a vicious-toward-cops city council woman, Kshama Sawant, cops suspected the chief’s demise was imminent. The chief resigned soon after this pushback.

Then, voters had elected Mayor Jenny Durkan (a former DOJ official who’d played a part in imposing a bogus consent decree on the Seattle Police Department (SPD)). During a police chief selection, she removed SPD Deputy Chief Carmen Best, who was acting as interim-police chief, from the pool she was considering for permanent chief.

The community and officer uproar against Mayor Durkan removing Best was so animated the mayor not only put Best back in contention but also selected her as the new police chief. This is one of the rare cases where the rank and file got someone they supported. But we’ll likely never see a repetition of this unique situation.

To reinforce what happens to chiefs who publicly support their cops, consider this nonsense. Mayor Durkan recently announced she is “investigating” Chief Best for her pro-cop tweets as seen below. 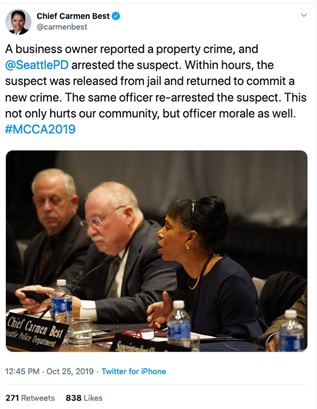 Even some self-described cop-critics (those who have not risen—or descended—to the status of full on cop-hater) have said to me cops want a chief who will look the other way at their “misbehavior.”

Law enforcement officers knowingly join a paramilitary organization comprising people who respect authority and understand the responsibility of doing one’s duty. Most police officers want a leader who understands the job from street level. If you ever hear a cop, especially a long-time veteran, refer to a chief or sheriff as a “real cop,” you’ll have just heard some high praise.

Police officers respect even a demanding leader who is honest, fair, and gives officers the benefit of the doubt, unless there is proof the officer doesn’t deserve it.

In August 2017, the US Department of Justice Office of Community Oriented Policing Services (COPS), held a forum to discuss the gap between rank-and-file officers and their leadership and solutions to bridge the gap. Some 40 officers, deputies, and troopers attended the event.

According to James Dudley writing for Policeone.com about the attendees’ discussions, “Several of the issues focused on how misinformation or miscommunication between the police and the public create problems for line officers.”

In my experience, officers may suffer two departmental backlashes: first, the public’s false perceptions of officers’ actions. Second, the department treating any negative reaction to officers’ actions as legitimate, regardless of right or wrong.

Dudley emphasizes the danger misperception can create for officers. Attendees divided into two parts what leads to the gap between cops and residents and between cops and their chiefs and sheriffs:

The possible solutions to the gaps included:

After all, police chiefs and sheriffs are still law enforcement officers who wear badges, carry guns, and may have to respond to critical incidents. When promoted or elected, some magical force doesn’t imbue police chiefs and sheriffs with permanent knowledge retention, continuing training by osmosis, or the perpetual ability to perform police procedures and tactics competently. These skills remain perishable for all human beings—even the top cops.