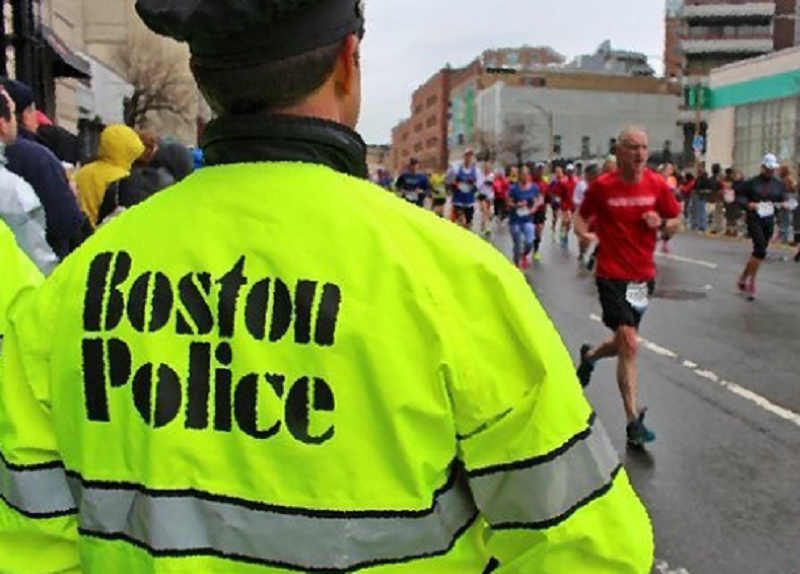 Several members of the Boston Police Department were met with a visit from their mayor, Michelle Wu, who stopped in to extend her gratitude and what sounded like a pep-talk, as if everything is peachy with the climate outdoors (the anti-police bluster experienced by cops, not the temps from Mother Nature).

Once Mayor Wu was done playing I’m-in-your-corner, she was anything but that, especially after she invited “questions” and received some well-founded ones having to do with the widely debated and court-considered unconstitutionality regarding vaccine mandates (making the case for Boston first responders). Other police agencies’ officers have been filing suit against their respective employers, seeking leverage from courts in order to sustain their careers as cops while staving off vax mandates.

One police officer in particular, quite obviously pregnant, articulated her deep concerns with the city’s mandated inoculations. This police officer mother-to-be mentioned she is due to give birth in about ten weeks. Likely on light duty, she is nevertheless subjected to the push of vaccines. Like many politicians, they seem to never really think things through critically, until a faux pas or calamity ensues and “So sorry…” blah blah blah is the go-to reply—if anything at all.

In a brief video clip, which appears to be recorded by another officer present in a Boston precinct squad room, in respectful tone and verbiage, police officers disinclined to receive the vaccine based on rights tried to pick Mayor Wu’s brain, to no avail. Like many other law enforcement agencies’ cops citing exemptions such as religious beliefs and values, what most would consider valid considerations fell on deaf ears.

In incongruous segments in the recording, a few Boston cops attempted to ask questions, all pertinent to the vaccine mandates imposed by the new mayor, and their concerns of being made to do something they do not care to do and the dubious nature of this long-enduring pandemic challenging peoples’ rights against their own bodily temples.

The mayor’s responses may have been nothing but a broken record skipping on the turntable, repeating the same rhetoric prefaced by the stale song of Thank you…really appreciate you for what you do…saving lives every day…yada yada yada…

The cops are not amused. Nor are they dimwitted when it comes to politic-speak and rather puffy orations remarkably intended to wind down the clock as they make stiff efforts to shimmy out the nearest door, whisked away to city hall or wherever elected officials retreat to lick their wounds or curse the scoundrels for wanting to talk the truth, like mature professionals do when confronting serious life circumstances—the very thing LEOs know all too well, as a staple ingredient in the line of duty.

Can anyone imagine firing heroic Boston cops, some of whom may have been at the Boston Marathon Bombings in 2013, due to opting out of vaccine mandates? Like many others, Boston is a police agency also feeling the pinch of short-staffing due to attrition (anti-police-induced retirements) and recruitment woes (same reason as attrition).

Recently, it was reported that Mayor Wu flashbacked to early Covid restrictions which impacted everyone well before quick-whipped vaccines departed labs. The Boston Herald published this passage to get right to the salient points:

“Proof of vaccination against coronavirus will be required to enter city bars, restaurants, gyms, theaters and sports venues under a new mandate announced by Mayor Michelle Wu during a raucous press conference.” That includes children. Hide your hamsters!

Since our thrust is on examination of the footage and how the mayor scuttled clarity for valid queries having to do with religious freedom, physical health and self-preservation, against any tyrannical plow, police officers are among the entire populace in Boston for which Mrs. Wu declares dominion…and their questions dissipated in the squad room waft.

So it remains: what-ifs surfaced, for which logical, reasoned queries deserve redress and muster. Like the vital fetal-sensitive one exercised by the female officer mentioned above, the cop inclined to deliver brand-new life soon. That is crucial. Have we everything there is to know about pregnancy and administrations of hurriedly generated vaccines? No matter the answer, a pregnant Boston cop has the right to opt out.

The “municipal Green New Deal” mayor neither woo’d them nor wow’d them; she just Wu’d them and walked away, leaving lingering questions unanswered. That’s politics, they say. Predictable scenarios are stale, and citizens pay for it all.

And those citizens made their voices clearly heard with synchronistic chants bellowing the lobby of city hall: “Shame On Wu.” Right before Christmas.

This is where we segue into the arena of a solitary party which seems to have a penchant for fist-pumping bad ideas they delude to believe are magnificent mayoral gifts.

Many metropolises arterially knotting America together have a certain brand of leadership which spins fairytales and either subtly or not-so-subtly demands you swallow their pills in the form of new programs, progress, reforms, equality, and the litany of proclamations promising huge victories.

Victories. Have you seen many? Any?

Since being beaten down (morally, politically, economically, and most-certainly physically), cops are still the ropes, with politicos taking swings, jabs, and upper cuts.

Speaking of cuts, the Boston enclave sits in the Commonwealth of Massachusetts. Entirely related to Boston LEOs and Mayor Wu’s non-negotiable stance, I had the jolting displeasure to read material regarding Massachusetts State Police (MSP) officers being “let go” right before Christmas, reportedly due to state cops refusing the vaccine mandate. Lest we forget, another dynamic to this situation involves law enforcement officers sizing up that their rights are being stomped, choosing to depart voluntarily:

As per Sergeant Michael Cherven, president of the Massachusetts State Police Association, elucidated, the crux we are analyzing is not one of anti-vaccine but one of the individual right to choose without ramifications of career-ending proportions.

Per a press release from the State Police Association of Massachusetts (SPAM), with an unmistakable and somber tagline reading “Twas the night before Christmas and the terminations began. Unfortunately, this is the first of many. During a time of critically short staffing and in a world where we strive to have a well-rounded, educated and wholesome Trooper, this is a loss for all of us.” 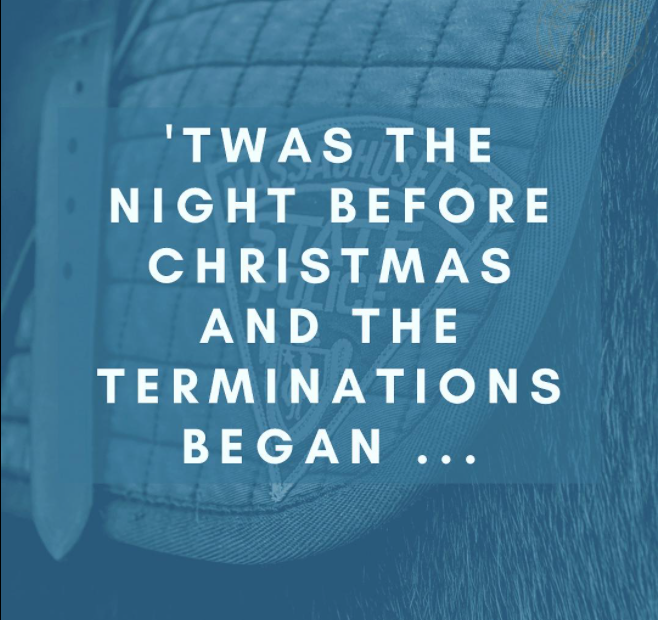 (Photo courtesy of the State Police Association of Massachusetts.)

Predating Christmas, in November 2021, MSP officers were given the ultimatum: get the vaccine jab or be fired. Citing beliefs which one state policewoman thought was credible to opt out, Samantha Cila’s lifelong goal to be a Massachusetts state trooper came to a harsh hard-stop.

After refusing to receive the vaccine, Cila was relieved of police duties.

Per a report from NBC Boston, Cila’s mom, Cheryl Cila, shared that her daughter “would not get the vaccine because of religious reasons” and that Trooper Cila’s exemption application was denied by the state.

Cheryl Cila added: “My daughter still wants to do this [job]. This is what she’s meant to do. We are a police family.”

Colorizing Mrs. Cila’s police-loving family commentary, NBC reporter Abbey Niezgoda offered some sentimental details to punctuation the sad saga: “The trooper handed over the keys to her cruiser, her weapon, and her badge. It was emotional because she was given the same badge as her father, Vincent Cila, who was killed in the line of duty in 2005.”

Turning to another massive municipality and its elected leadership lording over first responders, a Fox News story entailed Dr. Willie Wilson, a former McDonald’s custodian who morphed into a multimillionaire from several McDonald’s franchises under his ownership, recently contributing a $50,000 check to the Chicago Fraternal Order of Police, some members of which are without jobs due to their declining to take mandated vaccines.

The “Jab the Badge” video shares details, including an additional $20,000 in cash from Dr. Wilson for all Chicago cops without income after being severed from the force.

Grassroots efforts like this Chicago example are ordinarily employed to meet extraordinary circumstances otherwise created and/or exacerbated by tone-deaf governments widely stepping out of bounds—what many courts continue to deem “unconstitutional.”

To see any police officer anywhere in America terminated just before Christmas just seems so antithetical, especially during a time when citizens rejoice and revel…and bad actors take note.

Threat assessments stemming from ideations of public safety officials, albeit harsh in reality, must be heeded. Whittling away public safety pros often has dire consequences for everyone expecting constitutional promises of life, liberty and the pursuit of happiness.

Fewer cops on our streets because of governors and mayors and county commissioners ostensibly unwilling to compromise, refusing to consider bona fide exemptions such as religious principles or other pertinent validity, only deepens the danger levels for Americans trying to live in a democratic society and achieve extraordinary feats, full knowing that dangers lurk and police officers are the antidote for sanctity-ruining scourges. 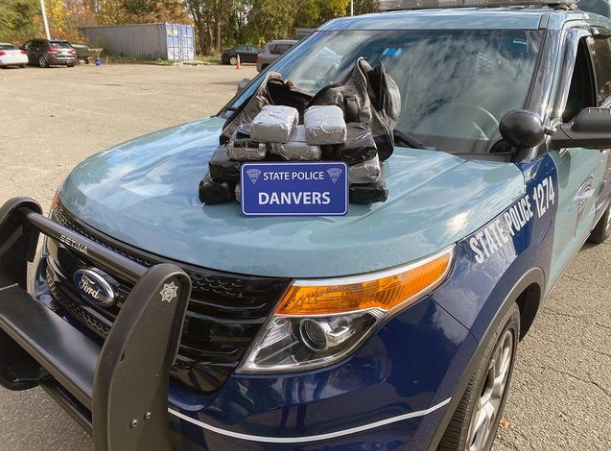 As with virtually all police unions in the United States, SPAM’s directive sums it up empirically: “We will continue to look at all legal options and work with our members to ensure their rights are protected.”

The from-all-sides browbeating and diminution of America’s cops upholding constitutional bases for all (including themselves), hard-lining policies contraindicating robust roles of cops combatting the hard-to-miss flourish of criminality enabled by soft-on-crime figureheads needs heed.

You get the point…and I don’t mean Big Pharma’s.