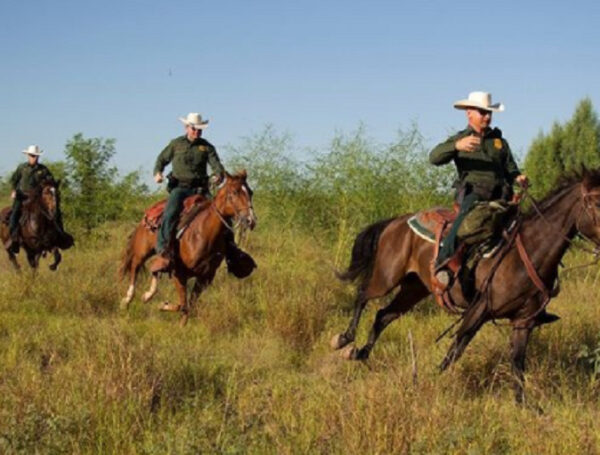 Among the batch of titles mulled for this latest atrocity against law enforcement, the one you just read is perhaps an understatement, given the overwhelming duties they perform against all odds.

Where does one begin to attempt to unpack the ridiculous nature of the current presidency and his underlings toeing the line of hypocrisy, disowning due process, and betraying law enforcement?

When a weak-kneed president invests vitally needed energy in knee-jerk response to un-investigated he said/she said gossipy stuff which most often skews stories to either pander or redirect from other pressing matters concurrently out of control…there is a tremendous problem.

In this case, it painted bruises upon our heroes staffing the fringe frontlines touching Mexico.

What continues to fester at our nation’s southern border is undeniably a failure on so many levels. Border Patrol efforts is not one of them. To the contrary, these men and women donning federal law enforcement badges while navigating unforgiving terrain under harsh climate conditions is the polar opposite, and serves as a countermeasure for the unfettered flood of foreigners the former president combatted with border wall wisdom and pro-police vigor.

Conversely, the present White House occupier foolishly toys with American safety by weakening our sovereign soil by reducing border security measures and telegraphing come one/come all messages. From afar, many listened. As of this writing, DACA is a thing again.

A small nugget of history before we dig into the latest liberal-fed fiction. Per the Border Patrol archives, “Horses play an integral part in line operations due to their ability to traverse various terrains at a swift pace. These capabilities have helped the United States Border Patrol secure our borders for over 96 years.”

Quite a mosey stint without any horse drama. Until now…albeit counterfeit.

The scene depicting a small cadre of Border Patrol agents mounted on horses, trying to prevent Haitian immigrants from illegally breaching our border at the water’s edge where Mexico is within a stone’s throw from Texas, using horses as a quasi-wall to block absconders before they become ghosts in Anywhere, America, endemically holding reins made exactly for equine direction and control, illustrated federal LEOS feverishly performing their duties.

All while routinely wearing a barrel-load of equipment, including a ballistic vest—a harsh clue telegraphing the omnipresent perils of doing the nation’s dirty work while boiling in blistering sunrays.

Mind you, from an officer-safety perspective, boots bracketed in stirrups means lower-extremity motility is rather restricted, thus the particular imagery emphasizing one of the Border Patrol agents canting sideways to hand-hold the shirt worn by a Haitian man intently dodging the pseudo-wall of horse-bound agents, abrupt motions caused by scrambling immigrants, culminating in the widely skewed narrative surrounding the ribbon-like rein jutting the air.

Interestingly, from a position which appeared to be behind the Haitian immigrants’ intent on bypassing Border Patrol agents, a videographer recorded footage of the button-up-the-border efforts.

To go with these words, here is a brief exposé by Trust Index labeled with a “Not True” rating, proper nomenclature, and explicable Border Patrol policy and procedures regarding their Mounted Unit:

At no time was the accusation of that agent “whipping” that man a reality. The blatant lie ensued before being debunked by the actual videographer who recorded the imagery. He voluntarily attested that there was no whipping whatsoever.

Addressing the media, videographer Paul Ratje clarified, “Some of the Haitian men started running, trying to go around the horses. I’ve never seen them whip anyone. … He was swinging it, but it can be misconstrued when you’re looking at the picture.”

In a forensic scope regarding the imagery in question and officer-safety principles, the Border agent’s left foot appears slipped from the stirrup, thus rider stability forfeited to some extent. In context of the agent clutching the shirt of the absconder with his right hand, with his left hand he’d instinctually grip the horse’s bridle to rekindle balance and leverage against toppling off the service animal. Mindful of involuntarily dismounting, he’d be quite intent on bracing whatever he can to maintain positioning in the saddle.

Additionally, the instance occurred on hilly terrain with a rocky bed at the water’s edge; again, stability is going to be paramount, thus gripping a shirt with one hand while actionably deploying the rein with the other (the lie they want you to swallow) equates to an agent giving up control of himself and his counterpart animal. Just not gonna happen in any context.

Paramount is the staple ingredient for any LEO anywhere: dominant firearm hand always free/readied. Having never been a Mounted Unit cop, I can only imagine the hyper mindset of policing atop a living organism quite large in size and strength, so there’s that overwhelming factor too, overall leaving zero logic/ability to do what has been alleged.

Visible to anyone investing even a scant view, the rein held by the agent rider’s left hand means its stem is pointed up while its thinner length flails freely thanks to breeze and the physical contention between two humans diametrically opposed.

Nevertheless, the fiction was launched. Federal LEOs were condemned for things they did not do instead of being commended for doing things for which they are responsible and duty-bound.

Seems for some living in an alternate universe, there is no alternate to fiction, exemplified by our smarmy VP, exuding tendencies similar to the prez under whose tutelage she is appointed “immigration czar,” audaciously marketing deception and heaping slander while noticeably absent from the festering border crisis.

In her typical character, the VP jibed among the soap opera-ish vat-dipped liberalism (one that rhymes with The Skew) and fostered the outlandish lie by comparing Border Patrol agents to slave owners. Once again, she giggled while unloosing her fib and slinging slander. Bizarrely odd for a career prosecutor to jump right to conclusions instead of honoring due process, employing fact-finding efforts, and using objective reasoning.

Writing for The Hill, Joe Concha authored an article titled “Biden, Harris push big lie about Border Patrol” which he opened with, “Due process sometimes seems like a foreign concept to the Biden administration, particularly when it comes to how it deals with the crisis at the border.” Pretty sad yet true statement, correctly implying border agents’ laps are maxed by mayhem and support from politicos can fit in a thimble, with room to spare.

Ending with a segue having to do with poll numbers pertaining to abysmal performance since taking office, “The Five” offered us their take on the two maligners, scoring the part about our leaders aiming at the completely wrong targets:

Obviously and understandably unsettled by the slander Border Patrol agents have received due to a misconstrued photo and the hop-on-board hit squad otherwise known as DC elitists, National Border Patrol Council president Brandon Judd denounced the baseless attack on the agents he represents and took it to the core, calling Mr. Biden the “worst commander in chief.”

Check out this brief recap of the updated realities occurring at our southern border and how agents are somehow enduring despite all the political nonsense, weakened border security measures, and unbridled flow of likely Covid-carrying immigrants illegally snooping at the nation’s fringe:

And because of this administration’s failure while Border Patrol tries to stem the tide of illegal immigration, the other elephant in the room is the drug cartels gleefully taking advantage, successfully depositing their dope on our soil, and reaping massive profits, thus emphasizing the myriad tentacles confronted by Border Patrol agents:

Drafting this piece, my mind engendered the naysayers who seem to bark at the existence of police unions representing law enforcement officers against erroneous accusations and false claims made by members of the public on the daily. Body cams have been a decent deterrent to out people filing falsities against cops. Complaints field by sophomoric, petulant personas usually stem from those who refuse to take responsibility for their ill-placed actions.

“Jen Psaki, White House press secretary, and Alejandro Mayorkas, the secretary of the Department Homeland Security, made outlandish and irrational claims about being horrified by images that show Border Patrol agents on horseback using authorized equipment and techniques to deter and prevent a large group of people from illegally entering the United States in Del Rio, Texas. The shameless hypocrisy demonstrated by Psaki and Mayorkas in criticizing the agents in the field who were left to deal with this unstable situation without any sensible strategic plan by the Administration is far more horrific.

“It’s not surprising representatives of the Administration were quick to make ignorant and derogatory comments about the events, considering the Administration’s disdain for law enforcement and underlying desire to defund the police. Nevertheless, instead of fake outrage, Psaki and Mayorkas should be horrified by the fact that agents have been forced to deal with the deplorable situation for days due to the Biden Administration prematurely dismantling effective measures that deterred people from illegally entering the country.

“The National Border Patrol Council (NBPC) will not sit by idly while members of the Administration attempt to shift the blame to agents for the indefensible conditions the Administration facilitated in Del Rio, Texas. The Administration is solely responsible for the mishandling of this issue since day one and should be the primary focus of any investigation into the events occurring there.”

Gotta love an experienced police leader whose integrity is galvanized and whose conscience is laden in truth…and unafraid to tell it like it is. Like other police union figureheads, Mr. Judd speaks true kudos liars do not wish to hear.

Nothing new from the anti-police crowd, slandering cops is their recycled hunk of trash when their own inadequacies come to the fore and a scapegoat is needed to deflect deserved negative attention. I found a July 2019 communique from the NBPC. It reads, “Border Patrol agents work tirelessly to keep our country safe and are honorable, decent and hardworking public servants that risk their lives day in and day out. These groups —’radical members of Congress, Immigrant Rights groups, the Fake News Media and the General Public’— should be ashamed for trying to demonize us, dehumanize us and for attempting to turn public sentiment against us.”

As The Hill’s Concha wrote, “The spin is comical, even by D.C. standards.” I concur! You?

Writing on behalf of the Border Patrol, Chris B. offered pertinent distinctions at the end of a piece he wrote regarding “President Biden’s Del Rio Disaster.” It reads: “It is apparent that President Biden is oblivious to the concept of due process. It is an American institution that holds that people are entitled to a fair and impartial investigation and that they are judged after they had a chance to defend themselves. Border Patrol agents cannot be judged by anyone sitting in the White House and passing along decrees based on a few seconds of misleading video and carefully edited photographs. As President Biden said, ‘It’s simply not who we are.’

“We are disgusted by President Biden’s words today. This is not leadership, but pure intimidation.

“Our agents deserve better. They deserve an apology and true leadership.” Circling back to what we said at the onset of this article: Border Patrol Agents deserve medals.