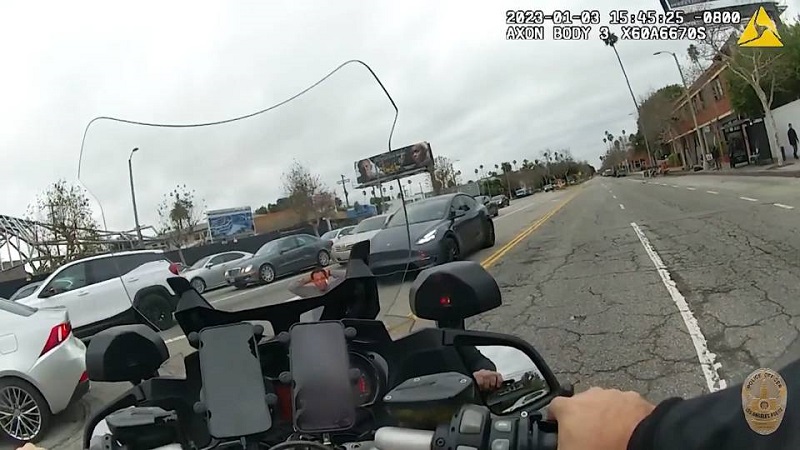 Once again, I reviewed elements of officers’ actions (including video recordings) during a use-of-force incident in Los Angeles. As always, I waited for that—hold up—moment where I can’t defend the officer’s actions. I don’t excuse the behavior, but there are plenty of people who will gladly criticize it.

The NPA tries to teach you why officers’ actions you thought were wrong weren’t wrong. Unlike cop haters, we don’t want you to arrive at the conclusion we want. Research the hell out of an issue or controversy for yourself and then arrive at your own conclusions.

She makes the accusation despite the suspect, Keenan Anderson, reportedly died in a hospital four and a half hours after police tased him as he was seen on video acting erratically, resisting arrest, allegedly having caused a traffic collision, and attempted to steal a man’s car.

As cops expect, most media coverage about it is anti-police. The first sentence of The Guardian article declares: “A cousin of Black Lives Matter co-founder Patrisse Cullors was killed by Los Angeles police after he got in a traffic accident and officers… repeatedly Tased and restrained him in the middle of the street, according to body-camera footage and his family’s account” .

It’s not unusual for BLM to take any police use-of-force incident, no matter how much evidence exists that the officer acted correctly and will attempt to eviscerate the cops.

Perhaps, BLM was looking for a distraction from the “only BLM-backed federal candidate since January 2021,” former Louisiana state senator and Democrat Party Chair Karen Carter Peterson, who has just received a 22-month prison sentence following her conviction for wire fraud involving $140,000 in campaign and Democrat Party funds.

Back to LA, a motorcycle officer rode up on a traffic collision. Witnesses pointed to Anderson who is walking away from the scene. On video, the officer approaches on his M/C, and the suspect says, “Somebody’s trying to kill me.”

This behavior is not normal (unless someone is actually trying to kill you). Note: news reports contained no corroboration that anyone was trying to kill the suspect.

Anderson repeatedly transitions between cooperative and non-cooperative. The officer tells him to get on the sidewalk and stand against a wall. The suspect holds up his hands and says, “I didn’t mean to.” He didn’t mean to what is also not clear. After a few moments of cooperation, the suspect again runs away.

The cops have no idea what the suspect might have done, and not having been searched or patted down, he could be armed. Officers must consider these possibilities.

The M/C officer, still wondering why the suspect is running away, catches up to Anderson again. The officer tells him to “get down.” The suspect lies down on the pavement as other officers arrive.

However, even as the suspect yells, “help me, please,” he continues to act erratically and resists officers’ attempts to subdue him. The suspect seems under the influence of a mind-altering substance.

Remember, the officers have no idea what the suspect has done or not done or why he’s behaving so erratically.

Then the suspect says, “Don’t George Floyd me,” which, if nothing else, helps confirm his bond with Cullors. I suppose the suspect’s subsequent death had nothing to do with any ingested substance—even though his behavior is spot-on for excited delirium.

The officer says repeatedly, “Stop or I’m a tase you,” and “Stop resisting.” The suspect resists officers’ attempts to handcuff him. Cops do with criminal suspects and people acting erratically, such as when experiencing excited delirium.

The officer tases the suspect multiple times because Anderson continues to resist. Note: The Taser deployments were on video and the device has an internal mechanism that records each taser use. Officers were hiding nothing.

You can also see the Guardian’s bias in this line: “After a few minutes, he appeared to be concerned with the officer’s behavior, saying, “I want people to see me,” and “You’re putting a thing on me.”

A suspect’s behavior controls the officers’ reactions. The suspect could have prevented or stopped the tasing by cooperating with officers. Why he wouldn’t cooperate appeared to be affected by substance abuse.

A suspect’s transitioning from cooperative to non-cooperative is something cops see all the time.

So, taking a suspect’s comments made on video as sacred is one huge mistake (or intentional tactic) anti-police leftists do. Just because the suspect says, “I’m not resisting,” does not mean he’s not resisting.

I’ll never forget an armed robbery suspect we once stopped. We had him lie face down in the road with his hands out from his sides. He complied but continually screamed as if we were torturing him. “Ahhhh! Stop. Owww! I’m giving up. Stop. Please, stop!” There were high-rise apartment buildings surrounding us with concerned people looking down in “horror.”

My partner and I were kneeling on the road to either side of the suspect, and one officer stood at the suspect’s feet. The suspect continued screaming bloody murder. If I’d been watching from an apartment, I’d have thought the cops were killing him, too.

My partner and I glanced at the suspect and then smirked as we realized neither of us was even touching the suspect. Yet, he continued to scream his Academy Award-winning performance. He only stopped screaming the moment he was in a patrol car, out of public view.

This happens all the time, folks. Although, in our case, it wasn’t excited delirium; it was career criminalism.

Cullors said all her cousin was doing was “asking for help, but that’s not what he received.” She added her cousin was a “man fearing for his life. And was trying to protect himself.”

Police only contacted him after his actions had drawn attention to himself. The entire police contact occurred in full view of the public, in the middle of the street, much of it captured on video. But the truth means nothing to BLM.

NBC also reported an Uber driver stopped and, pointing toward the suspect, told the police, “That guy right there [Anderson], he caused that accident. He was trying to steal my car.” The witness also said, “Yeah, the police are doing the right, uh, job right now.”

Woah! The suspect may have been on drugs? No. Let me pick myself up after hearing that revelation. Who could have predicted such a scenario?

Every cop in America, that’s who—and a whole bunch of clear-thinking non-cops, too.