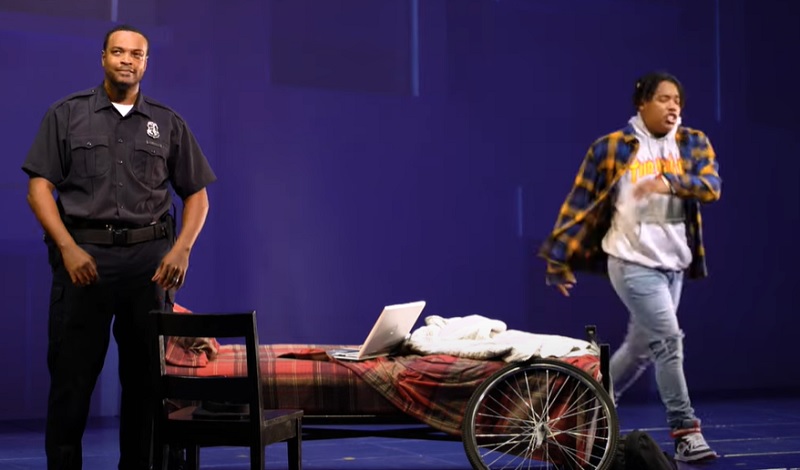 No! No! NO! Just stop the lies about cops.

I can’t think of another topic where people have wrung more lies out of a myth than radical leftist cop-haters hating on cops. In the never-ending stream of you-can’t-make-this-up stories comes another nauseating display of anti-police “entertainment.” At least, this one is unique, although its upcoming host city is not a surprise. It’s an opera. It’s in Seattle.

Thompson will direct the Seattle performance, which “will be audiences’ first chance to see the original production since its 2019 debut… (ironically, it was closed because of leftist-extended CCP virus restrictions).

A promotional photo at Operawire.com shows actors portraying two grieving parents, consoling each other, standing over, presumably, their son’s casket. This is understandably heartrending for any parent.

But the Opera’s producers apparently want the audience to believe that black parents grieving for the shooting death of their child is, generally, primarily due to “police violence.” However, every objective statistic confirms most young black victims are gunned down by other young black males.

This opera collects all the radical leftist false narratives and fabricated stereotypes about police officers and dumps that slop all over their audiences. Creators decided one main character needed to be a “race-conflicted” (my word) police officer. They describe the officer’s son, closing himself off in his room “when he sees his father in uniform.”

Karras writes, “Like the son in ‘Blue,’ the young man saw reminders of his father’s job as symbols of oppression.” This message is nothing less than deplorable.

Thompson said he spoke with black police officers whom, he said, “told him about wanting to be forces for good even as their neighbors — and even some of their colleagues — viewed them with suspicion.” Really? Maybe if he spoke with a former cop like NYC Mayor Eric Adams? Then it might make sense.

Neighbors, okay, but colleagues? Sorry, I ain’t buying it. I know and have worked (work) with many black cops and former cops who don’t believe this insinuation that white cops “viewed them with suspicion.”

However, I understand how this could happen to people—even some cops. When you have a major political party, radical activists like BLM, Hollywood, pro sports, academia, and the legacy media shoving that America is racist down your throats every day, how can some black (and other) Americans not succumb to the onslaught of the hate-filled anti-police mythology? Tragically, the youth are most vulnerable to these lies.

“As a Black [sic] man,” Karras wrote, “[Thompson] has watched the consequences of racism unfold in America over and over…” describing the playwright imparting his experiences into his opera. Think about that. This is a black man who wrote a politically partisan, but acclaimed, opera, which is about to open in one of a major American city’s most erudite venue.

McCaw Hall is home to the Seattle Symphony Orchestra, Pacific Northwest Ballet, and Seattle Opera. How “oppressed” is that? An objective observer might say, not at all. Also, not sure if it’s meant for the “oppressed masses” or leftist elites, but ticket prices are listed at $56 per person.

Karras laments that two years after the in-custody death of George Floyd, “the themes in ‘Blue’ are… more relevant than they were then: violence plagues the country as its citizens loudly deplore it.”

Finally, something I can agree with. Increased violence is plaguing our nation. But police officers are not committing the violence. Leftist political officials pro-criminal/anti-police policies are allowing violent criminals to run wild, destroying cities, and murdering people of all races and ethnicities.

And, according to the Chicago Sun-Times, 71 people were homicide victims in the city in 2022. Apparently, none were “innocent victims” killed by police. How could that possibly be?

But no one is likely to write an opera about this innocent young woman. She doesn’t fit the leftist narrative of “police violence.”

And most of this increasing violence is occurring, by design, thanks to federal, state, and local leftist political executives and city councils who wouldn’t recognize an effective approach to crime if it walked up and sung an aria in their faces.