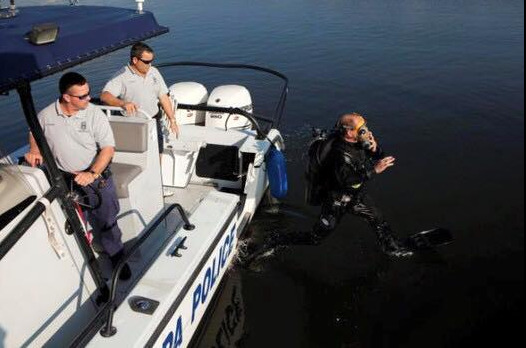 Of the many deployments law enforcement agencies have as public services for citizens, special certifications and ongoing training results in highly skilled public safety professionals doing a certain job where gills would really help but human adaptations are nonetheless employed.

Law enforcement marine units and dutiful dive teams, albeit rarely mentioned in routine police work, take on dangerous responsibilities in the course of solving waterborne activities either criminally purposed or search-and-rescue necessitated. The latter spawned a massive deployment in my area recently, with catastrophic findings.

After channel dredging stemming from beach erosion evolved in major maritime refurbishment, a newly re-opened county park/beach in my community made the news when formidable riptides (aka “rip currents” or “under currents”) claimed the lives of a father and his toddler son, resulting in a third young adult jumping in to save the father/son duo. The good Samaritan’s rescue efforts resulted in a casualty.

The sheriff’s office and larger police departments which have dive units were joined by the local U.S. Coast Guard Station personnel in combined efforts to locate the bodies in a confluence of seafaring channels navigated by pleasure boaters, merchant marine shipping monstrosities, and gargantuan cruise line vessels floating into/nearby Port of Tampa.

Thankfully, police marine units and dive teams are in service, relegated the ghastly task of going under in the same treacherous waters which claim lives. In this horrific case, two bodies were located within a day and the hero who took to the unforgiving tides was found several days later.

Despite underwater apparatus to facilitate search and rescue efforts, one can only imagine the skillsets and buoyed mindset to achieve such a mission surrounded by tragedy…and the loved ones waiting at the shoreline harboring granules of hope in an otherwise seemingly devastating outcome laden with loss.

Among the law enforcement agencies helping conduct the search for the three victims mentioned above, various deployments were implemented: small boats, walk-ins from the actual beach of origin, and helicopters occupied by police divers jumping into waters below.

Just like most other law enforcement training days out in the field, requisite equipment is paramount and is often transported by a large police-owned vehicle/trailer, especially considering the weight of dive apparatus.

As police agency personnel customarily do, training for even the most outlandish circumstances is key and included. What-ifs which are replete in police academy days should not relent once cadets graduate and get to field training to do the job. Often cited as “progressive,” police departments train like their life depends on it—it surely does. However, uniquely enough in American society, LEOs diligently practice skills pertinent to both their general role and the specialized units to which they belong as experts in a given aspect of public safety.

Having said that, I came across an example of a police diver outfitted in dive skins operating a jet ski on a city street. Yes, a city street, voluminously covered in water from one of those lovely hurricanes during which the seas flood urban areas, depicting a surreal underwater downtown akin to the Lost City of Atlantis.

Ever witness a dive-skinned cop on a police jet ski searching for people to rescue…with a red and green and yellow traffic light unfathomably jutting from a fathom-like body of water which doesn’t belong?

Thanks to Hurricane Sandy, the dive team cop in that image was extraordinarily patrolling a city jurisdiction under water and with bleak chances of signs of life, implying more recovery than rescue. Looking back on the data collected, 37 people lost their lives in that hurricane which encroached upon New Jersey. Eerie reality, but dive cops do it.

Given criminals are the only ones thrilled by their would-be brilliance of hiding weapons and all manner of incriminating evidence in bodies of water, it should come as zero surprise that police divers have the last laugh when they pursue leads, suspicions, or geographical areas in proximity to the crime scene and discover evidence to solidify the investigation, ultimately leading to conviction.

In an apropos pose illustrating our topic today, the Virginia Beach Police Department snapped a picture of their Dive Team in 2016, all standing in front of a certain pertinent statue symbolizing the sea and those skilled in navigating it for varying purposes in service to the public.

One of the many public services provided by police divers is in environmental realms. As the Miami police marine unit supervisor explained in one of our videos linked above, cops play a big role in documenting and tagging submerged obstructions for legal excavation/impound, facilitating dive scenes toward safe removal of sunken boats, thus securing obstacle-free channels for boaters to navigate without catastrophes.

With posthaste stemming from the devastation of 9/11, the U.S. Department of Homeland Security kicked it up many notches, hyper-vigilantly evaluating the myriad ways terrorists could inflict their vile violence upon American soil…including using waterways to sabotage populations and supply routes feeding them.

Merchant shipping lines from all around the globe visiting U.S. ports were met with scrutiny, leaving nothing to chance, despite allied nations exporting products for our consumption.

The school of thought among public safety was that even though cordial countries were doing business with us, the chance that a terror cell seizing the idea that we may not be as suspect of our allies’ vessels being phantomized by bad actors taking advantage of an avenue to potentially circumvent American law enforcement sleuthing was possible. Well, our nation’s public safety brains were ahead of them on that notion.

The federal administration authorized/allocated boatloads of funding to ensure cops were ubiquitously present at our shores, on a 24/7/365 basis. Much of this necessitation evolved in police dive teams searching the hulls and props and other submerged surfaces, nooks, and crannies of massive ships, in all-out efforts to eliminate the possibility of terrorist organizations from obliterating our ports and thus disrupting the flow of goods by causing carnage and mass loss of life.

Many police agencies created (or expanded, if they already had a faction in place) port divisions whereby cops were assigned full-time to the commerce of the maritime shipping sector. In equivalent context and as supplements, beat cops would sign up to work “extra duty” on their off days, ensuring the integrity of this vulnerable conduit is well protected and not forfeited for bad actors to reduce to smithereens.

Conversely, preceding 9/11 heightened awareness and public safety vigilance, cartels notoriously try to manifest methods to have their illegal narcotics aboard long-haul cargo ships transporting innocuous common-day products. If a nefarious crew of cartel-hired divers manage to implant narcotics for yet a follow-up team of cartel-employed divers to remove drugs for street distribution once in destined ports, that means police interdiction efforts employ divers to search for and seize drug cartel products, ala check mate.

The sheriff’s office Homeland Security Division in my local area’s massive port offered us the following tidbit: our law enforcement “Dive Team responded to more than 68 calls for service in 2020! The eight-member team also conducted numerous dives for U.S. Customs on incoming cargo vessels for illegal narcotics being smuggled into Tampa.” No matter the climate and world events, cartels do not relent.

Speaking of interagency cooperation to get the public safety job succeeded, a bevy of police entities from federal, state, county and municipal levels are routinely joined by the United States Coast Guard and sometimes U.S. Navy outfits, the latter two of which set the bar in terms of training, certification requirements, and endemic methodologies regarding enforcing maritime statutes applicable to the high seas or inlets.

As one who routinely signed up for extra duty slots down at the port, I met plenty of marine police officers who were pivotal in diligent diving and public safety assurances. I got to watch some cool stuff: police divers suiting up, spotters double-checking functionality, police techs explaining the instrumentation, hybrid diver/bomb squad experts walking me through the process of their highly specialized duties, all enhanced with constant training exercises:

Although smaller law enforcement agencies cannot afford complete contingents of marine units and the staff and equipment required to succeed in such a provision of public safety, traditional mutual aid agreements facilitate dive operations from larger police entities which had the highly trained staff and gear to achieve waterborne objectives.

What the public sometimes hears is that street duty cops carry plenty of extra weight in terms of tools on the duty belt and ballistic body armor with pockets stuffed to the brim with more gear and gadgets. Similarly, police divers are laden with stuff, as explained by the Hillsborough County Sheriff’s Office Dive Team:

“The gear for team HCSO’s Dive Team weighs 60 lbs. altogether! Divers have a dry suit for dirty water and a wet suit for cleaner water, plus: Tank, buoyancy compensator (attaches to the tank), regulator (the hoses for the tank), gloves, face mask, and fins.”

To accommodate primary street duties, some agencies have their divers respond from surface streets, with their scuba gear packed into the rear of general patrol SUVs. Arriving at water’s edge, these cops change out like superheroes and dive in.

Given that LEOs customarily communicate via spoken codes on police radio frequencies, such methods are defeated when under water. In the research for this material, I discovered that divers generally learn American Sign Language to message one another under water.

According to a sheriff’s office brief video exposing basic principles of police divers jumping from aviation unit helicopters, once divers are in the water, they surface and kind of tap the top of their head with a closed fist—telegraphing “I’m okay.”

My childhood on the shores of Brooklyn’s murky and turbulent East River, Manhattan on the other side, and chronic pleasure and commercial craft vessels coursing the deep expanse, was scarred on three separate occasions when friends decided to dive in for a swim and not return.

The scenery remains with me—loss of life due to difficult-to-navigate waters…and the NYPD divers who searched for days until young bodies were recovered.

Remember when airline captain “Scully” piloted the largest jet-ski ever when he landed his commercial plane in the Hudson River waters shadowed by Manhattan skyscrapers, stemming from a bird strike to the aircraft’s engines? Both NYPD and FDNY marine units were instrumental in that mass rescue effort, via public safety boats and police divers jumping into the waters from helicopters. It’s the kind of stuff from which major motion pictures are scaled, and this water-based rescue effort was scripted for the big screen.

On that note, anyone can imagine the eeriness and gore of performing dive duty, one so vastly different than the pleasures of diving on coral reefs and taking in scenery of God’s underworld phenoms in natural environments lending to cinematography via clarity and natural ecosystems inhabited by creatures gilled for the breathtaking environment.

As mentioned at the onset of this article, law enforcement divers searching for three souls (one of whom was a toddler) for a few days was succeeded by body recovery, generating indelible images upon the brains of those specially-skilled cops who at great risk to themselves were able to bring some semblance of closure to a few families as a community prayed with bated breath.

If you are thinking My, the potential PTSD from such an experience! so am I. Unfathomable reality of a police diver’s duty, yet they plunge and police the underwater world.

As a police diver friend of mine put it, the general experience of operating in water is akin to floating in space with all its wonder and abounding vulnerability, often in unbelievable depths with utter reliance of properly functioning equipment to keep you alive and get you home…