Skip to content
Two Decades Since 9/11, Yesteryear Heroes Remain on the Job 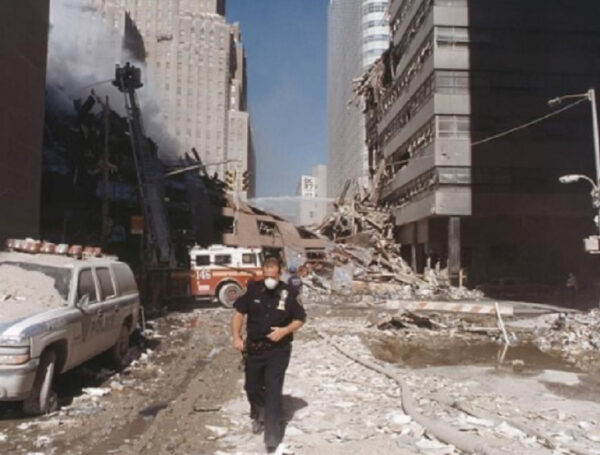 It’s been two decades since two terrorist-hijacked planes slammed into two very tall world-renowned towers, both ultimately crumbling to the ground. Before, during and after the diabolical action, law enforcement officers were either already in the World Trade Center complex, rushing to it in attempts to salvage lives after the unspeakable happened, or assigned grotesque yet necessary tasks of sifting through rubbled concrete, pretzeled rebar, and gourami’d girders of steel…hoping with every fiber that more lives were still to be found.

Some hopes were fulfilled while many others were dashed—remains were collected.

Drawing back on the six degrees of separation theory, it would be a few short years after 9/11 that I would meet and get to work alongside two NYPD cops who survived and ultimately decided to relocate their families to Central Florida. Their respective law enforcement careers would not cease, only commute much farther south.

Both of these gallant Big Apple cops applied and were hired by my police department.

As anyone can imagine, we had no idea what to expect from either of the two new “rookies” who, albeit starting over, catered a combination of many years of vast experience from metropolis policing with the nation’s largest municipal law enforcement entity.

It’s one of those life experiences whereby a ghastly incident happened to someone and the proverbial elephant in the room meekly takes up space…until the affected parties warm up and telegraph revelations.

Well, once fitted with new police uniforms and the gamut of duty gear, both of these NYPD veterans, tried and true and tested heavily, hit the ground running. The litany of arrests and seized narcotics and illegal weapons and cuffing of footloose fugitives tallied bigly. The other new cops (and some veteran ones) garnered immense lessons in quick-time via working alongside these two 9/11 survivors who, despite the rather macabre assignments they endured at Ground Zero, somehow manifested and maintained a psychosocial balance performing a hugely difficult job. (That last part might be heavily tested in today’s current anti-cop climate, yet both remain active LEOs.)

The grotesque assignment to which I allude is one that every cop knows is necessary and that, respectfully, citizens may not muster a clue (and that’s alright, too).

Both of these men in blue were components in a group of other public safety officers whose relegated purpose was to maintain custodial presence/control over a series of laminated bins, each marked and designated for forensic collections of human body parts: digits, limbs, torsos, etc.

No need to go into any further graphics; any one of us can envision (and feel) the surreal indelible nature of that police assignment and the mental burdens therefrom. That is what I meant when above I referenced the proverbial elephant in the room.

Unfathomable task, but it needed to be done. Men and women with justice shields were impromptu undertakers facilitating extraordinary processes carried out on behalf of coroners.

Fast-forward, each of these two battle-tested cops were evaluated by the police psychologist in the hiring process and deemed sound and suitable for police work. They were, incredibly so.

The lessons learned from them was/is invaluable. Today, one serves with an area metro police agency and the other serves with the airport police department located within the same city.

Given all this along the journey no human expects to confront and survive unscathed (implications of potential survivor’s guilt),neither has wavered in service to the public.

These two are categorical cops’ cops, testaments to the grit and sheer strength and fortitude forming the galvanized strata required to mount the good fight against the depravity foisted by malfeasance-laden terrorists and their cowardly tactics.

Weigh these horrors and manifest feats against the anti-police crowd…and consider what makes a phenomenal human being…one who can still don a badge and duty belt and march forward amid the needless chaos and political ineptitude in jurisdictions where true victims beckon public safety to mitigate mayhem.

Throughout the past few years during the annual 9/11 remembrance, I recall seeing hashtags and thought-provoking statements to the tune of Never Forget sadly followed by How Soon We Forget…the former self-explanatory, the latter underscoring how terribly many in our society have been mis-treating America’s courageous cops.

Albeit discreetly/respectfully, there was a third police officer with whom I worked. This individual also came to join our force soon after 9/11/01.

I was this officer’s FTO (field training officer) and was provided the foreknowledge that this rookie’s spouse was among citizens aboard one of the terrorist-hijacked flights on that horrific day, plunging not long after the Twin Towers began to buckle.

Like the others, this cop performed admirably and with the vigor of a human righteously determined to stand up for those who are preyed upon by utter evil, in accordance with oath.

As we go on about our lives and fill our days as we wish, in a society whose freedoms are used appropriately by those who value principles and abused by selfish others who spit on democratic republic doctrine, the staple ingredient cementing constitutional allowances and thwarting those who seek to undermine it all…are cops.

To the fallen and to those who continue to suit up for the unrelenting battle every day, hats off to you…