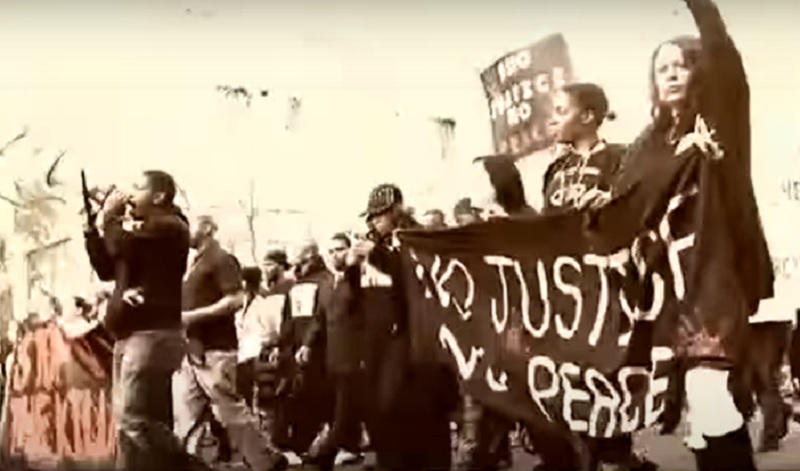 It drives cops nuts to see and hear inaccuracies and outright lies reported in the media about what they do and the criminals they deal with. I recall when The Seattle Times had a convicted felon appear on the front page, standing on the steps of the Seattle Municipal Court (SMC), the poster child for the “SMC Drug Court.” A program designed to divert drug offenders from incarceration toward treatment. Well-intentioned? Maybe. Though, while this guy was a drug user, he was also a prolific drug dealer.

The cops patrolling the sector and district in which the man plied his trade had to watch the Left venerate this guy. Cleaning up his act? Doubtful. A saint? No way. This was a man most of us had arrested—for dealing drugs—numerous times. Three decades later, the sanctifying of criminals by turning them into “hero-victims” is surging.

The Biden administration could not care less how law enforcement officers react to watching people like Democrat Joe Biden invite the family of a deceased unrepentant criminal, a home invasion robber, into the White House. I feel comfortable saying “unrepentant” because he was apparently still committing crimes and using drugs just before he died.

And how do you think cops feel when they see Biden equating the death in police custody of a career criminal and illegal drug abuser with the brutal assassination of one of the greatest Americans in our history. The Rev. Dr. Martin Luther King Jr. was a truly innocent victim who was literally hunted and killed—but not by police. If that’s not bad enough, an Ohio Catholic Priest compared this hero-victim to Jesus. These comparisons are psychotic.

How can anyone make such ludicrous comparisons with a straight face? I suppose, in some cases, it may be the person reading the script doesn’t know what the hell he’s saying.

I shuddered when exploiters of the Minneapolis incident displayed an effigy of the hero-victim with wings and a halo apparently ascending to Heaven. I imagine the Texas woman, at whose pregnant belly the hero-victim pointed a handgun, and whom an accomplice pistol-whipped during a home invasion robbery, doesn’t see him as angelic.

The Left always pushes too far. Nearly every case, the Left makes high-profile, of a white officer killing a black suspect involves the suspect committing a crime, resisting arrest, and has a long criminal history.

Comedian Chris Rock created one of the most lucid (and hilarious), public service videos of all time: How To Not Get Your Ass Kicked By The Police. It points out the importance of simple cooperation with the cops. His first piece of advice, “Don’t break the law.”

If only George Floyd had gotten into the police car. If only Rayshard Brooks hadn’t run from and then shot a Taser at a cop. If only 13-year-old Adam Toledo hadn’t fled from the police, while carrying a gun (If only CBS News hadn’t selectively edited that video). If only Daunte Wright didn’t have a felony warrant and then tried to escape from officers, setting up the opportunity for an officer to make that fatal error. If only Andrew Brown hadn’t tried to escape by attempting to run down sheriff’s deputies with his car. I could go on—for a long time.

If not for all these suspects’ actions, police use-of-force would not have been necessary. Cops deal with similar circumstances every single day across America, and almost all end without violence. It’s difficult for the average person to comprehend the life and death speed at which things happen once a suspect becomes combative.

While the above Chris Rock video made the point with humor, there is another video I recommend that shows how quickly an officer must decide to use or not use force. A police critic and activist, Rev. Jarrett Maupin, of Phoenix, Arizona, who’d recently protested against a police shooting, chanting, “We want your badge; we want your job,” agreed to participate in mock scene training with the Maricopa County Sheriff’s Office.

Police1.com showed the FOX 10 News’ video of Rev. Maupin taking part in three “shoot-don’t-shoot” police training scenarios. FOX 10 reporter Troy Hayden also took the training. In the first scene an armed suspect “shot” an obviously stunned Maupin. In the second, Maupin “shot” an unarmed suspect. In the third, Maupin took a man who appeared unarmed into custody but was concealing a knife.

Hayden also went through the first scenario but was not told how Maupin had performed. A suspicious, apparently unarmed man was loitering in a parking lot between two cars. During Maupin’s (officer’s) turn, hand on gun, he tried to speak to the suspect who ducked behind a car. The suspect reappeared with a gun and shot Maupin. When Hayden was up, the suspect also shot him. Hayden didn’t even have his hand on his weapon. The reporter’s reaction, “I’m dead!”

At the end of scenario # 2, when asked by a role player (deputy) why he shot an unarmed man, Maupin told him, “Hey, he rushed me.”

After the scenario concluded, the deputy/instructor asked, “Tell me why you shot him?”

Maupin explained, “Well, I shot because he was in that zone, you know? I felt it was an imminent threat. I didn’t necessarily see him armed, but he came clearly to do some harm to the officer, to my person.” Would Rev. Maupin, the police critic, have previously accepted this explanation from a cop who’d been in that position? Would anyone in today’s radical anti-cop movement? Not likely.

Rev. Maupin deserves a tremendous amount of credit for agreeing to explore firsthand the unpredictable violence cops face. Millions of people have seen this video, and they need to see it, again and again, to remind themselves what cops confront when criminals choose not to cooperate but to fight.

The videos referenced above require only a small investment of your time, but they return a huge dividend of knowledge. Perhaps if more people understood what law enforcement officers face in use-of-force situations, fewer people would tolerate anti-police radicals turning criminals who fought with or tried to kill cops into hero-victims.