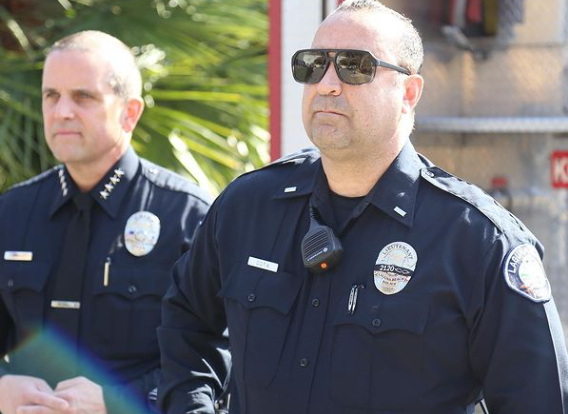 Ordinarily, each sheriff and his/her deputies pin a star-shaped badge on their uniform, representing countywide jurisdiction and an all-encompassing range of civil and criminal processes.

Generally, city police chiefs pin stars on their uniform collars. Expressly, some pin the word CHIEF on both sides of the collar and stars lining epaulets.

Whether city, county, or state law enforcement, each of these law-and-order providers is overseen by the brass who have earned agency-specified markings denoting tenure and highly experienced police prowess. It all starts with rookies climbing the hierarchal ladder.

Senior officers may have either gold or silver stars and bars embroidered on their “dress uniform” sleeves, indicating years of police service.

Here is an example donned by state troopers and defined by the Florida Highway Patrol: 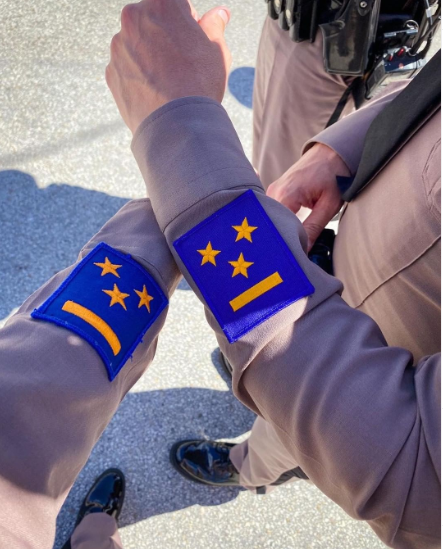 On FHP’s class-A uniforms, each star equates to five years of law enforcement service and each bar means two years. Thus, these two troopers have a matched amount of 17 years each as public safety pros.

The sleeve adornments correlate with either the silver- or gold-plate “Serving Since…” pins we see on all police uniforms, embossed with the year of swearing in, above which is the LEO’s first initial and last name.

Gold stands for some formal supervisory rank such as corporal/sergeant or above. My agency had a hybrid of silver/gold nameplates granted when officers achieved status as senior police officers (SPOs). The equivalent of SPOs in other agencies is classed as master police officers (MPOs). Both SPO and MPO essentially mark the end of rookie status and a new road to promotions/higher ranks.

Some police agencies’ SPOs (or MPOs) have either a silver or gold chevron on their uniform sleeve. Hierarchy among these pre-corporal ranks is often indicated by a single star below the chevron.

The Greensboro, NC, police department posted a chart typifying its police ranks, how they are recognized, and the scope of supervisory/leadership capacity of both sworn and non-sworn ranks.

Lest we fail to cover the largest municipal police agency in America, the NYPD rank chart is also expansive.

As law enforcement garb has undergone evolutionary design attributable to user comfort, often based on regional climate characteristics, “soft uniforms” became more vogue. My department switched to the soft uniform appearance in the mid-2000s, leaving officers the option to go with the classic blue uniform adorned with metal accouterments (described above). 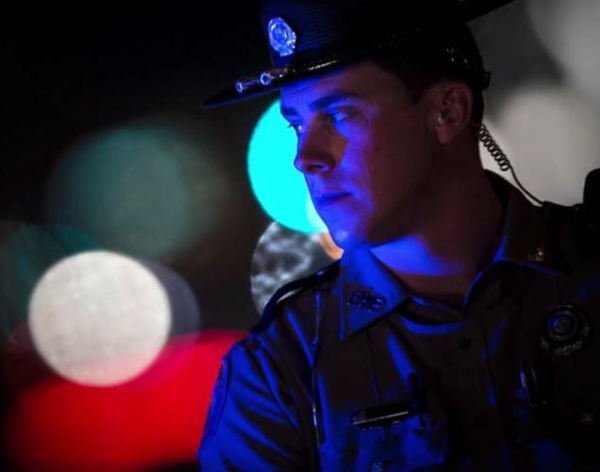 With advancements in uniform comfort, some of the traditional hardware such as badges, nameplates, collar pins, and whistle chains were replaced with embroidered representations of these typically metallic police icons (except whistle chains). 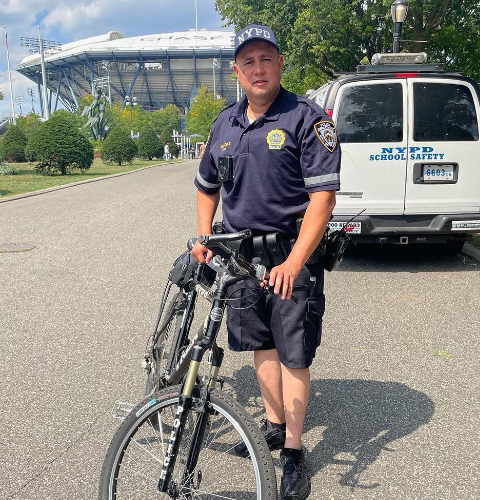 (NYC cop in soft uniform with embroidered markings. Photo courtesy of the NYPD.)

Incidentally, when was the last time you witnessed a cop using a whistle while conducting traffic control duties?

I’ve noticed many law enforcement entities did away with whistle chains. Metropolis police agencies such as the NYPD still use them, given the chronic volume of vehicular movements and the hodge-podge of pedestrians trying to cross large expanses, requiring lung-emptying cops whistleblowing while waving fast-rotating hands or jutting facepalm-like gestures to halt it all. Yikes!

I never cared for whistle chains—always considered them as an item that can counter officer safety, much like uncorralled and exposed long hair. Even when bunned, bad guys/gals will go for a grab.

As a police academy instructor once barked in my Defensive Tactics class: “Give them an inch, they’ll take your life!” 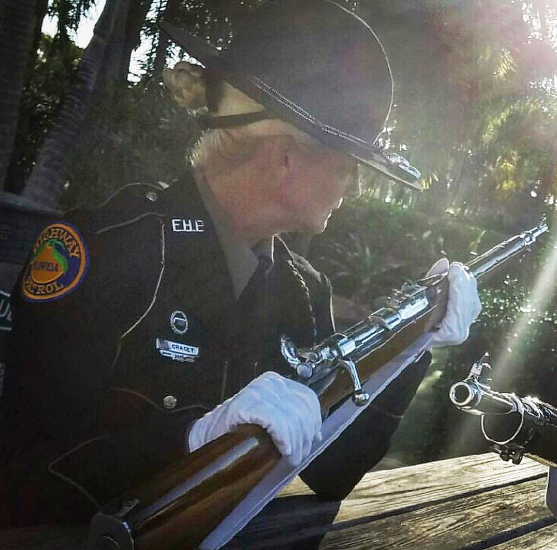 Nowadays, many law enforcement entities have done away with whistle chains. Although I hate to be the cynic, traffic laws in a growing number of jurisdictions that prohibit their police force to act upon many traffic infractions (some quite serious) make whistles look like caricature props. Many steps forward, liberal steps back…hamstringing cops from realistically protecting citizens. “Criminals be gone” has a whole new meaning now, thanks to political pander and pitiful policy.

Thankfully, neon-colored traffic safety vests with the glow-in-the-dark word SHERIFF or POLICE or TROOPER are affordable and useful. Throngs of people may mask a cop’s presence in the middle of an open street, but the neon glow magnetizes drivers’ eyes (not foolproof but better than not wearing high-visibility lightweight vests). 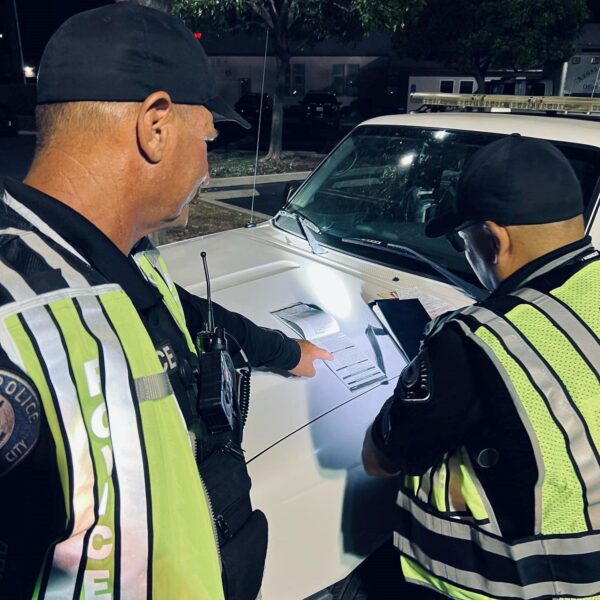 Besides the embroidered stars accompanied by bars (mentioned above), law enforcement markings include bars denoting rank (which implies tenure).

Also, silver or gold, metallic collar pins in the shape of bars on uniforms display command staff authority (one bar for a lieutenant, two bars for a captain). These, too, may be embroidered on soft uniforms. 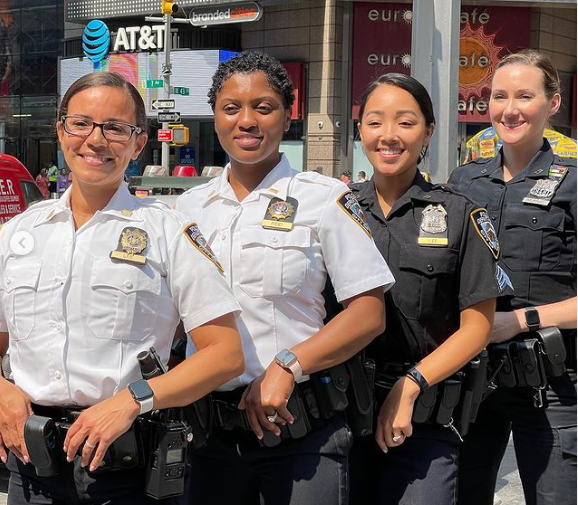 Another term for bars indicating tenure is “hash marks.” Signifying tenure, each diagonal stripe on the left sleeve amounts to either three, four, or five years of law enforcement service (depending on the agency specs). In the LAPD, it is one hash mark for every five years of police service. 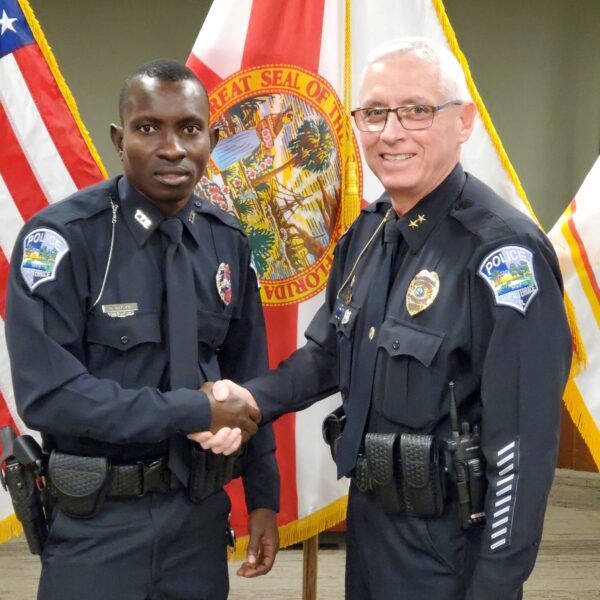 With each hash mark symbolizing three years on, the police chief in the image above has served a whopping 30 years and dons two gold-star collar pins. Police tenure markings vary though. Bill Parker, a retired policeman with 35 years of service, explained his agency’s method of exhibiting law enforcement tenure on uniforms:

“My agency did it a little differently. For [every] five years of service, the cop added a star to a name plate-type device worn over the shirt’s right-side pocket. After completing twenty years and sporting four stars, when the next milestone of 25 years came along, one changed to a single star with a diamond chip in it, and so forth. I retired with 3 diamond stars on mine, signifying 35 years. Since it didn’t require any sewing and the agency supplied the devices, we pretty much all wore them.”

“Each hashmark usually indicates four or five years of service, depending on the local custom. Most are half-length diagonal stripes worn on the lower right sleeve, but they can also be stars or some other configuration. I have also seen tenure indicated by stars embroidered or sewn above one pocket flap or displayed on the officer’s nametag.”

My agency permitted a display of years in the aggregate, meaning cops were recognized for a combined total tenure among all departments in which one served as a cop. Honor it all!

Although some agencies permit cumulative years in hash marks when a cop spends time at one department, then laterally transfers to another, the “Serving Since…” pin starts over when a police officer moves from one agency to another.

Outwardly, police cars do not necessarily come with markings to signify years rolling around the beat. Inwardly, the odometer does that. Generally, the threshold to “break out of the fleet,” police cruisers nearing 100,000 miles is a ballpark benchmark.

Take a gander at a police car website and you’ll marvel at the automobile engineering transformations and police presentations.

Observing vintage police cars wows me, though. The NYPD keeps plenty of their old “squads” around in garages, often rolling them out for police retirees who may have sat in the very same antiquated cruiser. 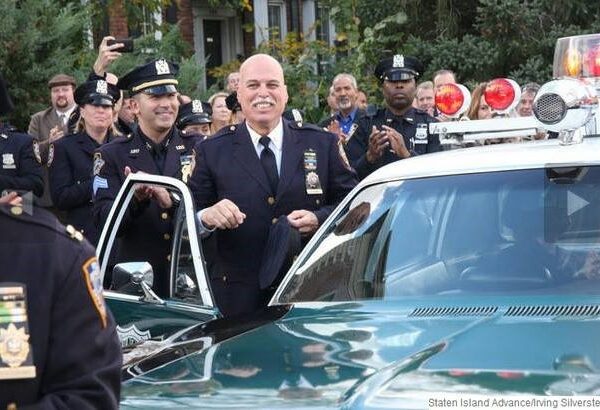 “Lieutenant Anthony DiPalma walked out of Staten Island’s 123rd Precinct [in October 2013] to a grand round of applause as he retired from the NYPD after serving nearly 44 years. Lieutenant DiPalma was taken home in a vintage 1974 police car, similar to the one he used to patrol Crown Heights where he began his career,” the NYPD reported.

“I love it. I love what I do. I loved my job. I loved every day. Every day was interesting,” declared Lt. DiPalma.

How far we’ve advanced in law enforcement mobility and emergency lighting technology. A far cry from the “Bubblegum-machine” and “lollipop” lights of yesteryear. 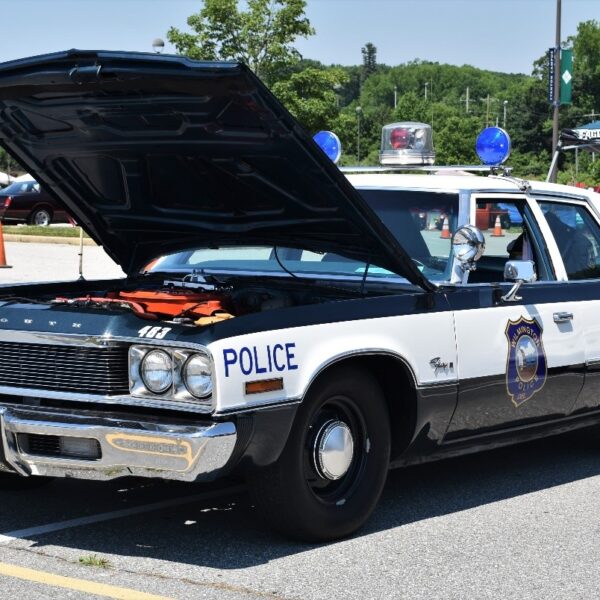 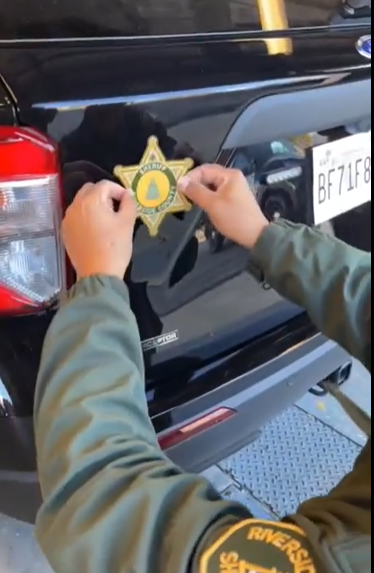 Little known but helpful is the fact that larger police departments and sheriff’s offices graciously gift their older cruisers to other law enforcement agencies hard-pressed to purchase the latest models engineered for the rigors of and constancy of police work. Police back-up comes in many ways, even esoteric.

Generally, LEOs carrying rank in departments that have take-home car policies operate mostly slick-top (no lightbar) and unmarked police cruisers. By unmarked, I mean zero graphics; typically, the only minute identifier is a city, county, or state license plate and “dog bowls” as hubcaps.

Last evening, I sidled alongside a black Dodge Charger with tinted windows. If it weren’t for the FHP State Trooper tag and those dog bowls I had on my cruiser, I’d be none the wiser. The benefits of lengthy police careers serving the public in dangerous environments culminate in incognito cops (ghost cars) on the streets.

Ultimately, when any police cruiser is beyond duty days, they are stripped of emergency equipment and electronics and sent to auction houses. Some of these sold at auction are still road-worthy; we see them tooling around with the “scars” of where police graphics used to be and rotatable alley lights still in the door frame.

We round out this material with the application of stars on police cars with lightbars. Larger law enforcement agencies afford their very own graphics shops which have trained civilian personnel craftily branding new police cruisers with the agency’s unique identifiers.

Stars, bars, and police cars…just some of the components fulfilling the same public safety mission all these years.