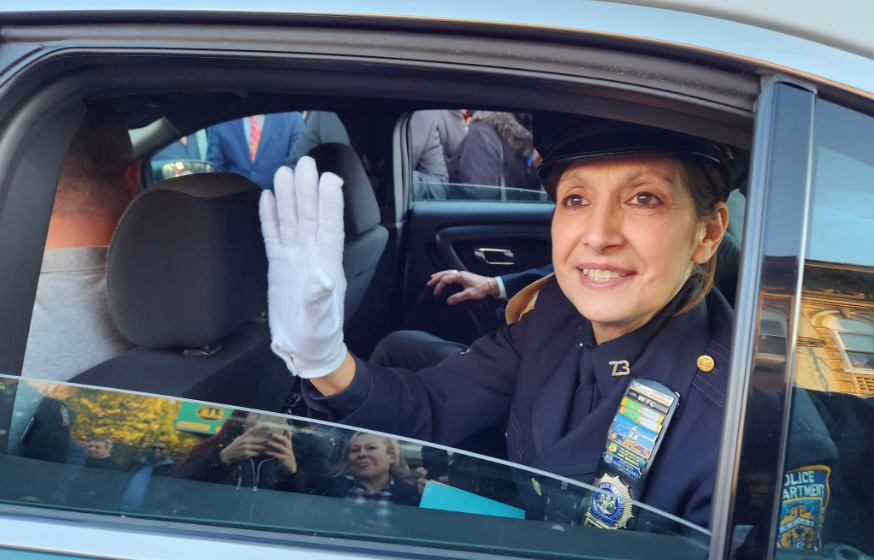 Several days in a row, I signed on to the interwebs to see police retirees depart the precinct for the final time, taking with them scores of law enforcement experience and wisdom. With pride in their posture and tears in their eyes, these historical events mark not necessarily the end of life as a cop (“once a cop, always a cop”) but the earnest beginning of whatever they have in mind…unimpeded by political yanking and entirely deserving of the heart’s desire.

Lately, the NYPD has been rolling out its tradition of an antique police cruiser —black, dark-green, and white markings topped with old-fashioned emergency lighting and siren hubs— the massive municipal department’s way of bidding farewell to its hugely tenured police prodigies in momentous events known as a “walk-out ceremony.”

On November 29, 2022, NYPD Chief of Department Kenneth Corey signed out as part of his finale and walked out to salutes and an awaiting vintage police cruiser from which he waved white-gloved hands to onlookers copiously applauding.

(Chief of Department Ken Corey retires after 34 years of dedicated service. Photo courtesy of the NYPD.)

Per an NYPD bulletin: “For 34 years, Chief of Department Kenneth Corey has been protecting & serving NYers. He first joined the NYPD as a Police Cadet & moved up the ranks to become the highest-ranking uniform cop. We wish him well & render a final salute as he enters retirement. Thank you, Chief.”

On December 1, 2022, the NYPD’s 73rd Precinct staff bid farewell to Detective Jayne Jennings for her “well-deserved retirement after 35 years of dedicated service.”

Also on December 1, 2022, the NYPD stood at attention and applauded the retirement of a detective who served for 35 years. Think about that: 35 years on the streets of Gotham, the city that never sleeps!

“Congratulations to Detective Mary Anne Petrizzo on her well-earned retirement after 35 years of dedicated service. We wish her health and happiness in all her future endeavors. The DEA salutes you, Detective!” That was a salutation posted on the Detectives’ Endowment Association forum.

This is what it looks like when a cop signs out for the final time and walks out the precinct doors, leaving the typical encumbrances and pinnacles endemic in law enforcement life: routines, cuffing criminals, processing reams of paperwork, courtroom testimonies, funerals of comrades, and of course, infinitely spewed hatred from the peanut gallery who have not one iota of what it is like to spend a career combatting depravity and pulling lives to the light of day.

Having said that, it becomes a strange brew of introspection during police retirement days: the ones that got away; the ones who were pulled from the brink of destruction; the ones whose toddler eyes tacitly begged for salvation; the ones who fought you all the way, then thanked you for not giving up on them…and so many more life-altering moments experienced as a cop.

This is what it looks like when a long-serving cop is proportioning major changes inherent in leaving what they have done for so long, perhaps having a plan but quite different than decades of practiced routines and a family of backup whose same tenet is to lay down his/her life for yours. That’s weighty, despite the proverbial milestone of retirement.

Respectfully, Detective Petrizzo’s facial expression conveys a bittersweet telegraph, one signaling the end of something grand, the not-any-more nature of belongingness catered oathbound service with brothers and sisters sharing the inner sanctum of a bustling police precinct, all its orchestrations possessing paramount feats on behalf of a mega populace.

But sometimes there’s more to come…

Sometimes a cop’s makeup of white and red blood cells circulating through the body has blue cells percolating away inside.

Even though today’s title implies the end of a police career, it doesn’t always pan out that way.

Amid monthly police retiree breakfasts and other convenings of former cops, many espouse rejoining the law enforcement profession. Some in my clique have done exactly that. Others are getting branding irons ready to poke the fire and stabilize embers.

Although not often spoken of, it is vastly challenging to stay out of policing, whether formally or informally—it does stay with you. There’s not much one can do about it. And, as cops go, we tend to act on our psyches telegraphing us to get back into the life-saving arena (or anything resembling that virtuous task).

Simple glimpses of all the ruination in America, in so many ways, become a collective magnet drawing attention and action both personally and professionally.

This morning, a police colleague of mine with whom I served on midnight shifts, pledged to get back in a police uniform. He is a former NYPD cop who, after serving at Ground Zero cratered by the bombardment of 9/11 trauma, opted to change the scene and settle his mind some. He went on to uproot his family to Florida, where he got on with my agency.

Afterward, he went to a larger municipal police department. He retired from there, opened up a string of franchises, and is seeking to don police blue again. Is it in the blood? Is it influenced by witnessing all the terrible transpirations and grotesque condemnation of law enforcement? Is it the inherent corral of courage needing to get beyond the gate of a watchful position? The human hunger to do something good in the face of so much bad stuff?

Every gathering of retired LEOs inevitably goes retro, ripe with chats harkening to bygone days when “things were so different.” The words “remember when…?” is a common tune among cops who have departed the biz of providing for the welfare of humans who immeasurably toll upon the heart and soul.

Several former cops on my and other squads, each of whom left police service for a potpourri of reasons, either returned in LEO garb or are buttoning up applications and processing schedules to score a role and immerse in roll calls once again…

With the constraints of police recruitment and retention nowadays, it is a bittersweet affair to witness a depth of talent walk out the door, deservedly so. Collectively, the three police veterans highlighted in this article have 103 years of law enforcement experience, each closing the duty book for the last time.