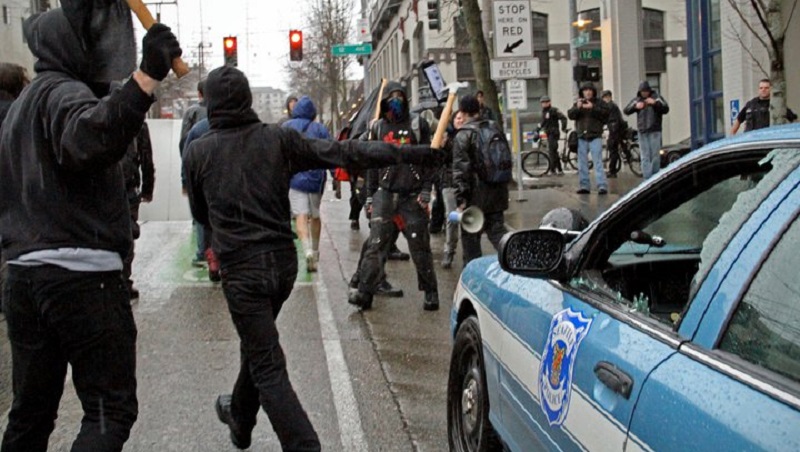 In 2010, I wrote an article that appeared in our police union newspaper, The Guardian, in response to the increasing social justice indoctrination of police officers. My article raised the proverbial hackles of our city’s political power structure. Dissent is not allowed.

City leaders seized on one word I used, “enemy.” They feigned outrage and turned it into a cudgel to attack me and deflect from the content of the article. How did I use the word? Essentially, I wrote that people trying to raise my taxes were my political opponents, but people attempting to abridge my liberty (and politically indoctrinate me) were my enemies.

With religious fervor, political enemies demand you either subscribe to their version of everything or you are a heretic. If you’re lucky, they only shun you and call for people to trod on your free speech rights.

If you’re not so lucky, you get smacked around with 2×4 boards, beaten unconscious in the streets, or some radical coward comes up from behind while you are in uniform trying to protect your city and shoots you in the head.

Yes, this despite the mainstream media’s incessant description of “mostly peaceful protests.” And now there are ludicrous calls for defunding and abolishing the police. In my old department, ironically, officers are now on 12.5-hour-shifts with all days off cancelled. I believe the LAPD is doing something similar. The radical’s behavior is causing cities to send increased funding to the police!

How extremist are they? Smiley, in an op-ed for Time Magazine, wrote he believes black Americans could be “re-enslaved.” Marxist, Dr. West, about the Floyd riots, said, “We are witnessing America as a failed social experiment… Its capitalist economy could not generate and deliver in such a way that people could live lives of decency.” Dangerous rubbish hauled out of the ash heap of history.

Perhaps Dr. West should have a discussion with this young black woman, Nestride Yumga. This brave American, originally from Cameroon, recently stood up to a crowd of Black Lives Matter (BLM) bullies in Washington D.C. She challenged the notion that all black lives matter by pointing out how BLM continues to ignore the scores of black lives taken in places like Chicago.

A white woman (obviously much more down with the black experience than this black woman) looks… well, rather silly, telling Yumga, a black life, to “shut up” and to “leave.” Funny thing is, Yumga did not leave. She said, “I am black, and I am free.” Strange, the BLM folks are the ones who left. I’m sure they couldn’t tolerate being in the presence of true courage.

And what about including balanced perspectives in police “training” about race relations? Why not include black conservative voices like Dr. Thomas Sowell, Dr. Shelby Steele, and Dr. Condoleezza Rice? For the radical left, these stellar examples of American success may as well not exist. These scholars explode the systemic racial oppression myths. The political and media partisans will not allow these brilliant, lucid minds into the conversation. Why?

Mostly because, as I alluded to above, they base their arguments on media myths like “hands up, don’t shoot,” while the lucid minds rely on real-world numbers that tell an accurate story: that systemic, institutional “police brutality” doesn’t exist. The partisans running many states and cities hate the objective facts in FBI and DOJ stats—facts are such… oh, okay, I’ll say it, inconvenient truths. Besides, in these rioting cities, they have been the “system” and “institution” for decades.

We have to realize, with this insurrection, we are not talking about political opponents here, people satisfied with seeking change through discussion, debate, and the ballot box. Even peaceful protesters—and those supporting them from home—believe the anti-police myths BLM, Antifa, and a major political party promote. And the so-called peaceful protesters are unintentionally—and otherwise—providing opportunity and cover for those involved in this violent insurrection.

Though I endured the 1999 WTO riots (and many others subsequently) and survived the attempts by my city government to politically indoctrinate me, and their officially investigating me for writing my opinions, that was nothing compared to what my brothers and sisters are experiencing today.

People I know and care about, friends and family, are publicly calling to “defund the police” (people who know their cop friends and family can see the malicious, anti-police posts) while, simultaneously, my fellow officers still on active duty are quietly bearing their horrible treatment—from nearly every quarter.

I’ve never heard so many pro-police folks I know either unfriending people on Facebook or dropping their accounts all together. For the first time ever, I “snoozed” someone on Facebook because of his painful ignorance, and I don’t want to dislike him.

No one in the mainstream media is even discussing the issue from the cops’ perspective. They are standing on the front lines of this insanity—and suffering the indignity of retreating from the violent malcontents when ordered to do so by cowardly leaders. Officer anxiety, frustration, and depression is palpable, which I’m sure delights mayors and city councils in some of America’s largest cities.

Officers are being mistreated not only at the hands of the insurgents and their supporters but also by their own city leaders, some of whom are expressing a slavering hatred for those brave men and women who continue to protect all the people.

I spoke out 10 years ago, and even further back, about the deception and intimidation the political anti-cop forces were using to denude effective law enforcement. And now we’re witnessing its culmination.

Every little piece they’ve torn out of effective law enforcement over the past few decades has led to today’s tragic reality: now we surrender police stations to violent mobs. While cops on the front lines continue trying to protect their communities, while insurgents—prodded by political enemies and a biased, anti-cop media—hurl insults and lies, assault, and even kill police officers.