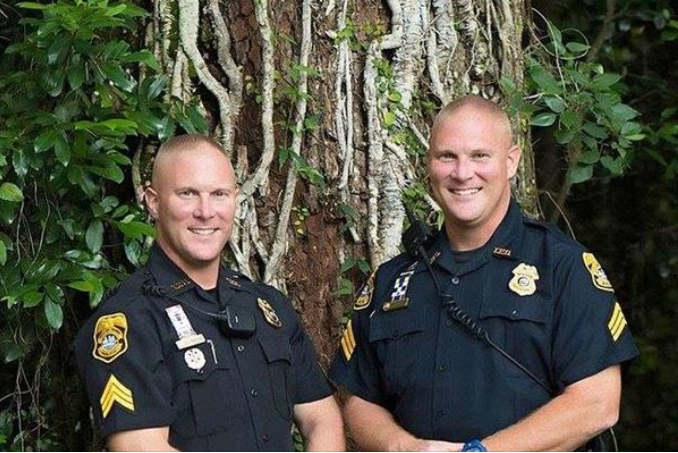 Although cops backing up their brothers and sisters is a constant in law enforcement, sometimes it is literal…in the familial sense. Following in someone’s footsteps has definitive roots in policing, with family-tree bloodlines —brothers, sisters, moms, dads, grandparents, great-grandparents, and cousins— comprising genetic transference reflected on uniform nameplates, sometimes within the same law enforcement agency.

Owing to the anti-police climate having chilling effects on police recruitment, with would-be suiters presumably dissuaded by grotesquely flawed public opinion (aka hate without debate), law enforcement lineage is at least a stalwart component concerning maintaining a degree of police ranks on our increasingly mean streets.

Recently, the NYPD (the largest municipal police entity in America) held its annual Fraternal Day, whereby cops related to each other and serving the public together are recognized and heralded. Not necessarily passing the torch but more so holding it simultaneously, doing the job with congruity linked to prior generations. Having grown up in New York City, my childhood pal became a cop, emulating his father who also followed the path of his father’s legacy with the NYPD.

Although my department never had twins as police officers, it did have a complement of father/son cops. It also had husband/wife cops, albeit working on opposite shifts.

Early in my police career, I met and befriended a set of identical twins who worked as cops for the Tampa Police Department. Randy and Ronnie are pictured in our cover photo above, and everyone was hard-pressed to tell them apart. Both starting with the initial “R,” two identical nameplates were affixed to their uniform blues, contrasting their strawberry-blonde buzzcuts. Both of relatively same height and body mass (weightlifters, and it showed). Neither one ever had a disposition other than positive and smiling, albeit understandably subdued from taped-off horrific crime scenes awaiting detectives to arrive and spearhead major investigations (the norm).

In criminal and traffic court sessions, there were occasions when the presiding judge looked up and did a double-take when these two Tampa cops walked in, both honoring subpoenas for separate cases coinciding on the day’s docket. The civilians in the audience (some of whom were defendants waiting on their adjudication) were amused by the sight of twin LEOs.

On midnight shift, my coverage zone sometimes overlapped one of the twins. Not able to distinguish whether it was Randy or Ronnie, I simply gave a quizzical gaze, tacitly compelling whichever one it was to self-identify. I learned that’s how other cops from neighboring jurisdictions speculated by whom they were being joined as backup officers from a neighboring agency. Mutual aid entails other agencies’ police officers and deputies showing up on traffic stops or citizen contacts, especially on midnight shifts.

As the years went by, I’d see one or both twin policemen exhibiting stripes on their sleeves. Their legend is that both always wanted to be cops, just like their father, whose father was a police officer. Both applied to and attended the police academy together (that must’ve been intriguing and confusing for the instructors). Both graduated together and took academy class pictures, one on each flank (like bookends), yet certainly standing out among the bunch of successful cadets.

Both trained on the same shifts. Each was promoted to Master Police Officer status simultaneously, then corporal, subsequently scoring a third stripe as sergeants responsible for their squad. And these two lookalikes are not the only twins though. Like some sort of magnetic field, the Tampa PD attracted the Hardesty twin brothers as cops. Although I do not have a picture of them both together, here is what they look like in police uniform, maintaining those bloodlines blues: 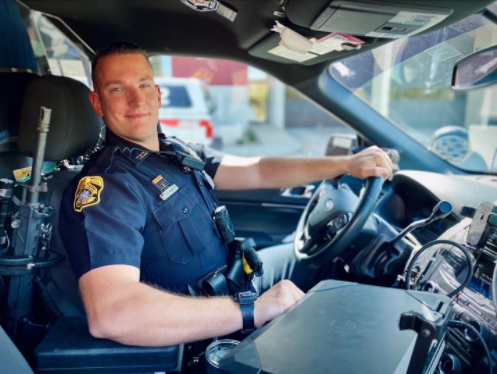 Revisiting that imaginary magnetic field theory and the seeming bevy of Tampa police twin sets, Corporal Matt Belmonte and Officer Mark Belmonte were both trained and certified together as Bicycle Unit police officers a few years ago. Here they are seen in bike unit garb, standing in a city park near downtown Tampa. 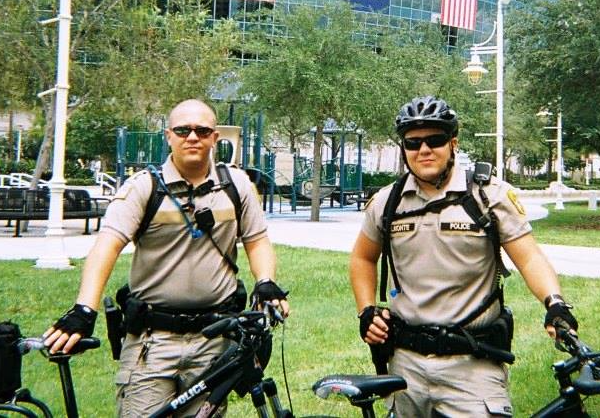 Maybe magnetism is part of the police recruitment answer toward mitigating America’s vacancies of cop slots. Yet another set of twins, Officers Elvin and Alvin Cruz are co-combatting crime as two of Tampa’s Finest, double music to their parents’ ears. 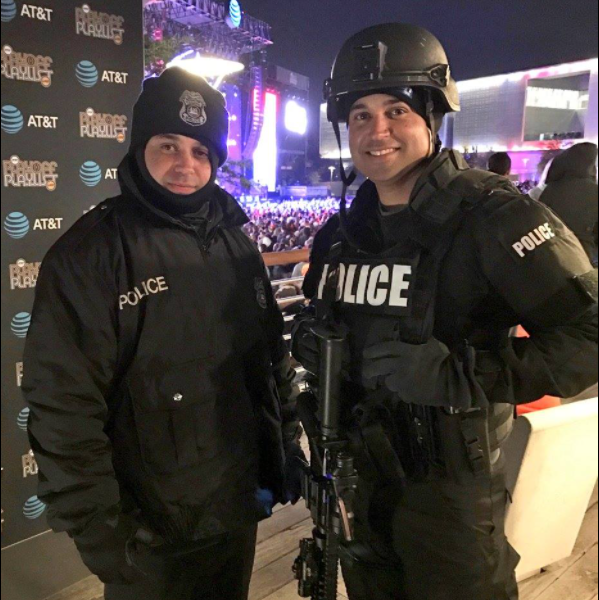 These are just a small handful of twinning police officers in my immediate area. Makes one wonder how many of America’s estimable 850,000 law enforcement officers are either twins or in policing due to ancestral origins. (I can only vouch for the NYPD, which has tons of kinships among their enormous force.)

Regarding twin cops,  I often wondered if their respective FTOs (field training officers) ever entertained a switcheroo (for fun), feeling duped. As a career-long midnight-shift cop, pranks are essential to survive long hours of all-too-often witnessing human depravity challenging the human psyche.

Like any law enforcement officer, tradition holds that beyond field training after graduating from the academy, there is an inherent reliance on veteran cops to mentor and help enhance the skill-sets of the newest officers. In that context, bloodlines in police families serve the same purpose, benefitting one another with regards to police culture, tactics, philosophies, experiences, and, extremely imperative nowadays, decompressing from the job’s myriad stressors (more on mental health in a moment).

Even though on British soil, a police family in the UK exemplifies our topic today. With the Greater Manchester Police, a trio of cops consisting of a dad and his twin sons serve the citizens of their region: “It takes two – new cop proves that twins really do, do everything together […] John Metcalfe followed in the footsteps of his twin brother Daniel” in 2017, both boys “being based in the City of Manchester and Tameside divisions. The brothers have had the perfect example in their father Tony, who has been an officer in the Force since 1994, having started life as a special constable in 1992. 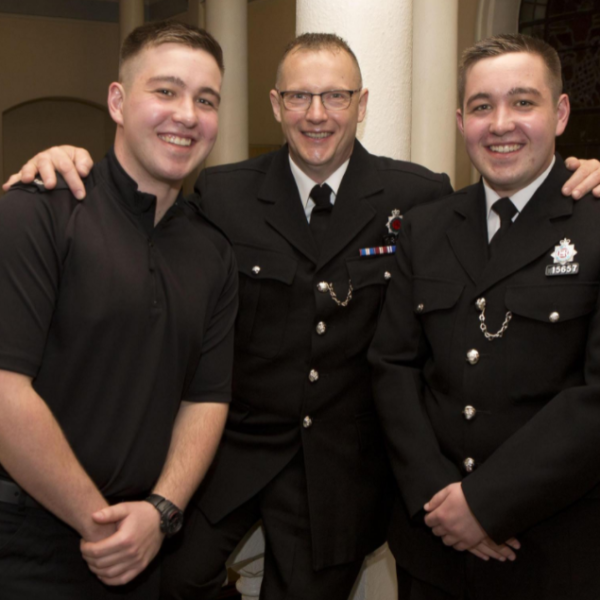 A Manchester police official noted, “Dad Tony spoke of his pride at seeing his two boys take on the role that he been doing all these years,” him saying, “I am absolutely proud as punch to see my boys follow in my footsteps, doing the job I love so much. I only hope that they have as much fun as I am and wish them all the success.”

One of the Manchester police twins added: “Ever since I was younger, I have wanted to be a police officer. I remember seeing my dad’s uniform and being in awe. Each day I now pinch myself because I am living my dream and it’s so much better because I’m doing it with my dad and brother.”

One thing I have noticed as a commonality among either twins or blood-related family members serving in law enforcement is that many hold rank—just an observation. From the Broward Sheriff’s Office in South Florida, we have the “double-mint twins,” named that, I suppose, for the green uniforms they wear. Akin to gym buddies working out and building up, lineage LEOs serving and striving together caters great support and mutual motivation toward honoring the family crest.

Twin sisters, Sgt. Shanda Martin and Lt. Shelunda Cooper embrace being blood-related deputies with sheriff’s office stars in gold. If I’m not mistaken, one of these two sisters starred in several episodes of LivePD, when the hit series film production crew rode along and recorded the street action. I’m not sure which one; may have taken turns.

Some police families follow each other from one agency to another. That is what two siblings did, relocating to a Florida sheriff’s office after serving as NYPD cops. Imagine the wealth of knowledge and experience these two former Gotham officers can provide their Sunshine State cohorts (respectfully, unused to mega-urban policing).

Speaking of the NYPD, a widely known incident in which a cop was slain along with his beat partner in 1972, carries on a family legacy in more than the one which was made into a major motion picture, “Foster and Laurie.” 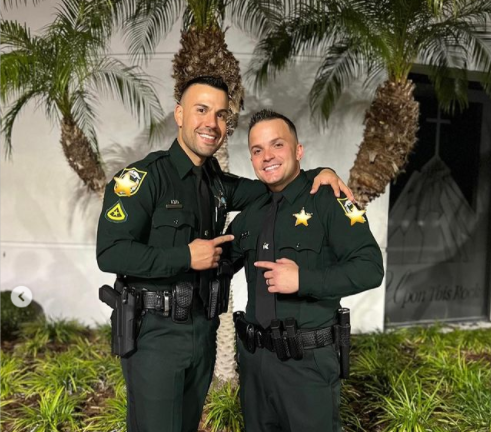 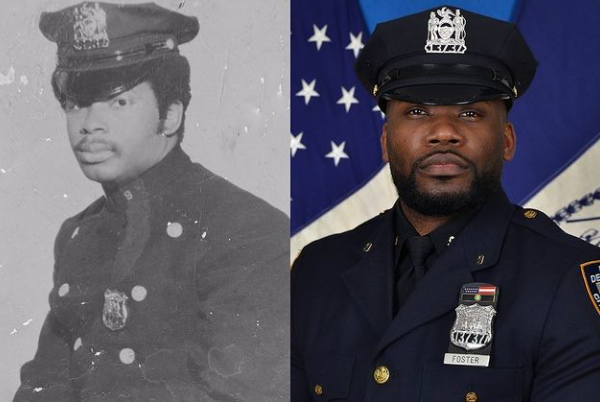 How’s that for emphasizing our subject matter? Despite the ultimate sacrifice inherent in law enforcement, and his granddad’s murder by a malfeasant armed with a gun, the bloodlines spanning years among the Foster family continue with the latest swearing-in and taking to the streets.

As we explore further, the Kansas City, Missouri police department just published an example of kinship in law enforcement, titled, “Policing is All in the Family for East Patrol Officer.” KCPD Officer Glendal Whitney’s parents were Compton, California cops. Retired, his police mom has some famed experiences to brag about: in particular, she was the police helicopter pilot who, along with her police co-pilot, gave us aerial imagery of the hugely viral video footage of O.J. Simpson being pursued in the white Ford Bronco in 1994.

Officer Whitney’s grandfather, who has since retired, was also a Kansas City cop. As Whitney said earlier this month, “I couldn’t see myself doing anything else.” Seems his verve for police work, influenced by his kin, has also encouraged his seven-year-old son, who is already planning to be a chip off the old block: a cop, like his father, grandparents, and great grandfather.

From our friends at Police Fitness Nutrition, we have these sentiments: “So proud of Deputy Ashley Herrera for punching life back and continuing to keep her husband’s legacy and memory alive in the most special way. Deputy P. Herrera […] stopped a vehicle for a registration violation. As he approached the car and asked the driver to step out, the driver exited the vehicle and fired 15 rounds, striking Deputy Herrera multiple times. Deputy Herrera did not have an opportunity to draw his own weapon.” 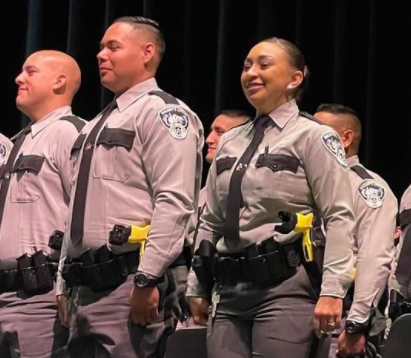 That’s a lot to wrap heads around. Yet, as a retired police officer, it conjures thoughts of sheer strength and determination and willpower and dedication not only to duty but loved ones who undeniably relate to the trials and travails of policing…with the worst-case scenario at the fore of it all, daily.

In that context, the oft-cited mounting need for mental health mitigation among America’s cops is readily served by blood relatives; those who have been there and those who are still serving as cops. One may see no better way to engender counsel and clarity than to defer to loved ones and lean on family bonds like fighters taking respite and breaths while bouncing off the ropes.

These examples and others just like them harken the maxim A family that plays together, stays together. Although policing can have dire moments and there is nothing playful about certain circumstances, unity among law enforcement lineage is a key survival tool, each acting as a pillar for one another.