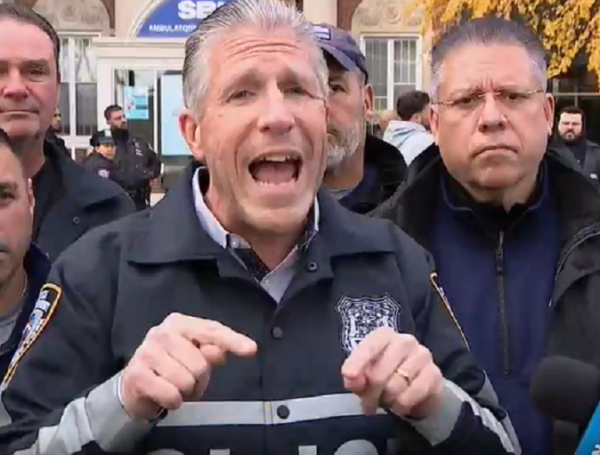 A brazen thug armed with a stolen firearm decided to go full-bore against a few NYPD cops called to address yet another “man with a gun” call, one among a litany transpiring in a politicized climate whose mayor did nothing more than dump fuel on the fire he not only ignited but left to spread, resulting in chronic mayhem, violence, and needlessly ended lives.

Citizens walking the streets in any of the Big Apple’s five boroughs (counties) have every reason to cement ideations to pack up and head elsewhere, thanks to political decisions culminating in godawful misery due to mistakes made by a Hizzoner who qualifies for most grotesque helmsman chaired as a big city mayor.

“Escape from New York” is not just a Hollywood flick, it is now a stark reality.

On Thanksgiving Eve, two uniformed patrol officers with the NYPD approached a male sitting on a residential stairway in the Belmont section in the Bronx. Within seconds, the suspect and one of the two cops were on the ground grappling. Shots were fired. Both the armed suspect and two cops were shot.

Still hospitalized as of this writing, the 20-something career criminal with nine arrests under his belt exuded nothing shy of wanton disregard for human life.

Addressing the public via the media at a post-incident press conference, NYPD Police Benevolent Association President Patrick Lynch unloosed a boatload of truth (once again), punctuated with “political mistakes” which greenlighted bad actors carrying firearms and unafraid to use them on anyone, including law enforcement officers. That is a surefire sign of a chaotic environment ignited by circumstances created by the municipal mayor and his ilk comprising NY City Council liberals throwing the baby out with the bath water.

Another recent example among many evolving/devolving in NYC reported on a 13-year-old child shot in the neck by a gunman who, compliments of political mistakes in the name of social justice and reform, was released from jail early (pending gun charges). The headline for this story included “Should not have happened.” No kidding!

“Imagine that’s your child, on their way to school, only to be hit with a bullet fired by a criminal who’s: out on a pending 2019 GUN case, AND he’s already on parole for a prior WEAPONS conviction. Today, AGAIN w/a gun.” (The police commissioner’s emphasis, not mine. Yet who can not relate to this innocence-stealing tragedy made possible by political pander and criminal-coddling?)

The footage of Mr. Lynch orating on behalf of thousands of police officers and the citizenry nailed it with the “political mistakes” comment. Not only because he has the courage and conviction to speak the truth but also because he bellowed those two true words while the main culprit who he was more than alluding to was standing there, right next to him, habitually bobbing his head as if he has nothing to do with the festering fiasco to which he gave birth:

With tons of damage done to New York City since he held office, the outgoing mayor is seemingly  vacuous regarding the facts being spoken, him being the primary target of deserved tirade from a representative of a large chunk of NYPD cops fighting the good fight, regardless. NYPD ranks evince the principles conveyed in their oath; can’t say the same for a metropolis mayor.

It may be reassuring that, even though belonging to the same liberal party, the newly-elected mayor of Gotham is a former NYPD police captain, who has already made it clear that he plans to reinstitute the anti-crime cops shelved by his pandering predecessor.

Would this latest free-roaming armed thug have been caught if such a specially purposed undercover police unit were already in place and scouring the streets for this brand of malevolence and their weaponry hardware? Hard to tell, but I know that the police initiatives and specialties designed to cleave the vines of violence ordinarily do not meet muster with liberal mindsets feeling cozy with letting things flow freely, without scrutiny.

Remember the dustup regarding “stop and frisk” policies in NYC when, in 2013, a federal judge castigated the NYPD for engaging in street interactions with people and accused them of racial profiling?

Since that ruling, what resulted in terms of illegal weapons being used against cops and citizens alike is an always-foreseeable increase in violence hatched by people largely unfettered due to the hands-off tact mandated by a gavel bang.

Lest we solely emphasize the NYC mayor’s abject failures and head-in-the-sand habit, a brief segue toward clones implementing identical doom-ridden policies deserves heat-lamps. Shamefully, a plethora of “political mistakes” are strewn all about the country. As has been said many times before, and bears repeating if we are to learn/grow from past poor judgments, the rather exclusive club of epitomizingly bad politicians elected to run these violence-torn municipalities are not of a conservative philosophy whereby overall preservation of all people is justly harped.

Looking across the American landscape, we turn to California, scrutinizing the results of how that government demoralized and defunded police, outrageously emboldening criminals with reforms catering to thuggery and inexplicable debauchery.

In the following brief video, a local businessman underscores our subject matter, especially noting the “manifestation of weak leadership…a manifestation of some really bad decisions our leaders made,” adding, “It’s a manifestation of deciding we’re gonna defund the cops” which, as all eyes have witnessed, has done nothing but invite anarchy to the freely collect every morsel and strip-bare the buffet table:

One key takeaway near the end of that video is the notion of voters taking charge over who is seated to make these devastating decisions. A recent attempt at political change resulted in a failed recall; perhaps next time they can get it right. The most endemic factors in life must be addressed promptly, accordingly, and without blurred lines scrawled by any political designations whatsoever. No one necessarily needs a party to enjoy themselves.

How does a mayor stand there (anywhere) and act as if life is just peachy on city streets realistically exhibiting mayhem close to surpassing Hollywood-depicted “Road Warrior” scenery?

No idea, but the NYC Hizzoner will soon be a goner. That makes many happy folks, including my family who have endured throughout the man’s reckless reign containing zero rhyme or reason other than serving as the ultimate culpable catalyzer of criminality.

For law enforcement officers in NYC (or any other cops whose “leader” is a carbon copy of personified political quackery), the tide must turn. The telltale signs are bold and belie all things wrong with certain selections of elected officials seemingly determined to ruin territories while defiling the police professionals who maintain the line between human decency and monstrous debauchery.

The tsunami of cops from liberal enclaves cheapened by political and even some police executives whose betrayal of the Constitution smacks of gross negligence and laughable philosophies continues to wash into pro-police territories. Many jurisdictions offer handsome sign-on bonuses and/or state-legislated extras to show deserved appreciation for courageous crimefighters.

A batch of former NYPD cops who took the leap of faith and relocated to southern states with their loved ones are already in police unforms whose insignia matches icons graphically affixed upon take-home police cars.

The obvious factor is practically in neon lights: liberal zones are largely free-for-all pits imperiled by political mistakes. Have you seen the increasing reports of liberal jurisdictions which have done away with certain enforcement actions resulting in shoplifting bonanzas and robberies and public health hazards of aggregate waste permitted to fester due to non-enforcement per local policy initiatives and/or rewriting laws to suit criminals?

What is going on in certain portions of our country is astounding. How far does it need to go before those who helped deposit these “leaders” in office to roll out political mistakes are impacted to where change is effectuated? Must it result in personal victimization in order to be addressed with conviction? Is there a tipping point of toleration levels regarding insidiously off-putting politicos?

How many more hard-working innocents must suffer and/or perish?

How many more days can we as a society of freedom lovers witness Constitution-upholding cops getting assaulted and slain in the process of reeling in armed and dangerous detritus roaming with malicious intent and willing deployment? The clout is in the wrong hands, and it must be wrested away by and for the people.

It is no wonder the mental health among America’s cops is significantly strained. It’s not necessarily that police officers can’t withstand the ongoing otherwise-avoidable human tragedies, it is that they shouldn’t have to. If it were not for the woke politicians being so adept at habitual mistake-making, what a wonderful world it would be…

Having been one among many aspiring to be a NYPD cop, it is a significant plateau to make the grade and don a Big Apple badge. Too bad many pulsing blue blood are devalued and deflated by abysmal government, feeling compelled to change course and move away to restart their police careers. When one goes from state to state, accumulated time does not necessarily follow—there is no continuation clause, no reciprocity among sovereign states. However, police experience remains and maintains, and that makes cops handsome in environs where LEOs are duly cherished.

Generally, states have what is known as “comparative compliance,” whereby a new police recruit from another state endures a mini police academy in his/her newly chosen state in order to achieve police certification criteria. The traditional, entirety attendance at a police academy is scaled down to portions primarily concentrating on state statutes (which often differ from state to state) and documented reiterations in conventional police work—experience is the mutually benefitting feature. 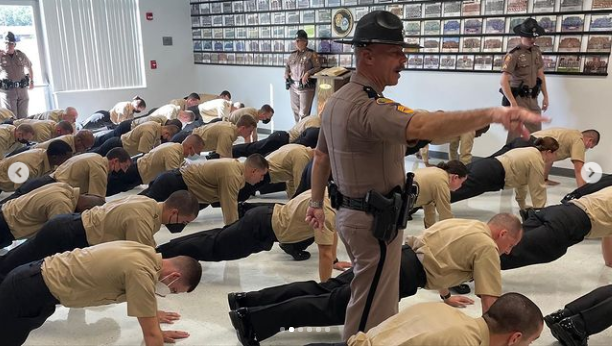 The new road is paved fair and decent enough, but time, often many years, is considered forfeited. It is a sting, yet it ushers the need, albeit drastic initially. Thus, it is that serious, and cops are employing proper strategies to continue the career they love in locales where they are deservingly heralded, and that amply implies pro-police law-and-order officials entrusted with everyone’s well-being and public safety.

One last note on the Big Apple bleed flowed by bad governance: Remember the blitzkrieg of statue-downing in liberal lands across America in recent times? Welp, my district congressman in the south rebuked the latest removal up north. Rep. Vern Buchanan stated, “The woke mob strikes again!

“A nearly 200-year-old statue of Thomas Jefferson, the author of the Declaration of Independence, the third President of the United States and one of America’s Founding Fathers, has been removed from City Hall in New York City.” Guess whose signature authorized that downfall. The outgoing perpetuator of political mistakery, the same one who was not present to reassure one of the two NYPD cops shot on Thanksgiving Eve when she was discharged from the hospital in a wheelchair.

(Photo courtesy of the NYC PBA.)

The former NYPD policeman/incoming NYC mayor was in attendance, though, applauding among hundreds of city cops, as she was escorted to an awaiting transport home, to recuperate before getting back out there on the mean streets.

Among those donning a metal justice shield, there is always hope…

As NYPD PBA President Lynch orated for media mics, “We need our elected officials to start doing their job as well as NYC police officers do theirs each and every day.”

Implicitly, Mr. Lynch rang the bell, saying, “We need to have a reset in the next administration.”