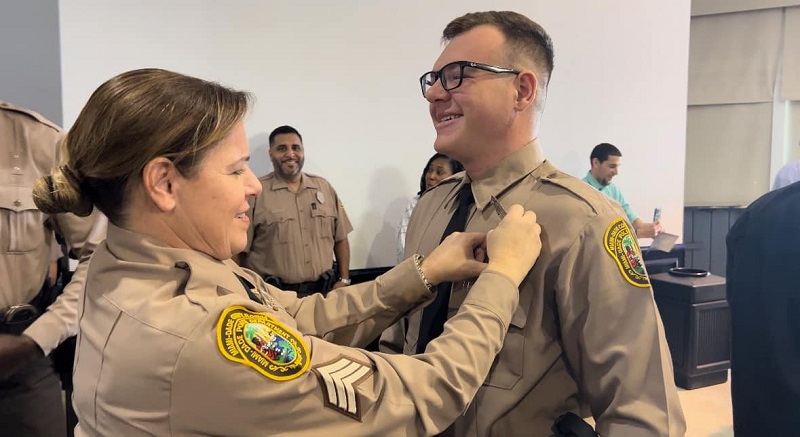 Although we do not often hear about family members following in the footsteps of their granddads, dads, moms, and other loved ones in law enforcement, it does still happen. This is a story of examples in one law enforcement agency that graduated a batch of academy cadets whose respective police-parent pinned shiny badges on crisp cop uniforms.

Every police recruit strives to make it through the rigors of the police academy. The culmination is ceremonious and is punctuated by the pinning of justice shields upon their agency uniform shirt. Photos record the monumental event, documenting the rite of passage attained by the few who dared to endeavor the public safety profession, especially in nowadays’ profoundly hostile climate.

The Miami-Dade Police Department (MDPD) held a police academy graduation on January 5, 2023. The celebration marked not only a milestone of hard-earned accomplishments manifested over laborious months of law enforcement training, but it also contained the uniqueness of several cadet grads being pinned by their mom or dad, well aware of the prideful occasion as well as the perils outside the walls of police HQ.

As archives go, a rookie cop pinned by his toddler son back in the day got to return the honor of pinning his now-grown boy who followed in the proverbial footsteps. Here are the before-and-after images provided by the MDPD:

The maturity levels changed but the MDPD uniforms have not—the police beat goes on in the Vargas family. A Miami-Dade police spokesperson posted the following:

“17 years ago, Homicide Detective Dael Vargas was pinned by his son as he was sworn into the MDPD. Today, Vargas returned the honor as he pinned his son as an MDPD officer.”

Pictured in the following image are both Sergeant Donnelly and her police academy graduate son, both holding his new tin, accompanied by MDPD Director Alfredo “Freddy” Ramirez flanking the mother/son duo.

Director Ramirez wrote some words, minding our topic today and looking back on the police family in his way, poignantly reminiscing: “Nicole Donnelly was my FTO as a rookie in Cutler Ridge, [Miami]. Today was a full circle moment as I watched her pin her son as an MDPD officer. This is why this department means so much to me & my family. Never forget where you came from, you never know where you’ll be in the future.”

Seeing how talented and dedicated his FTO (field training officer) was back in the day, ultimately achieving the rank of sergeant, why wouldn’t he consider hiring her son for the police force? As old-school folks would say, “He comes from good stock.”

And that’s largely the case concerning police aspirants who follow in family footsteps, keeping badges in the bloodlines, crimefighting across ages.

Given the dire straits we presently witness in American policing, resulting in shortfalls of recruits to fill the void caused by anti-police noise discouraging matriculation, we are grateful to have police families passing/sharing the torch.

On that note, another example highlights a father who served, pinning his police academy-graduate son, illustrating the notion we are covering, demonstrating the continuity of cops, which Director Ramirez referenced quite uniquely…

“These officers, our legacy officers, have seen what it takes to be an MDPD officer. They’ve seen the struggle and the burden the badge holds. Yet they took the oath to serve and protect our community while continuing their mother’s/father’s legacy.”

To all the newly minted cops and their still-serving police parents all over the United States, salute for taking on and continuing the law enforcement legacy generationally and courageously.