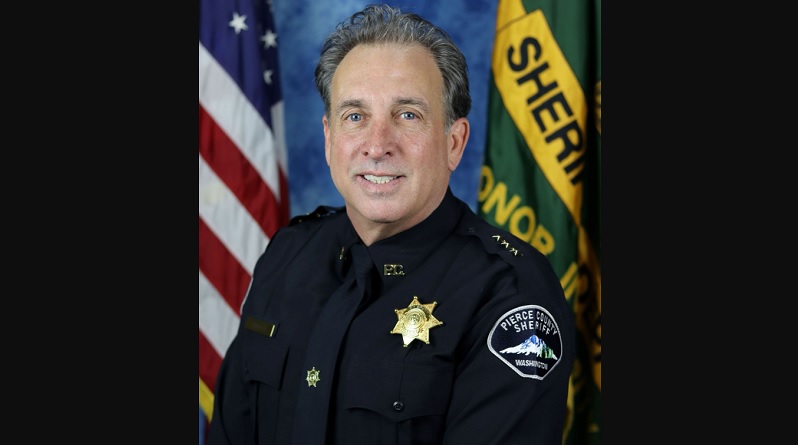 This case smelled rancid from the beginning and has continued to reek of fake racism throughout the investigation, prosecution, and unsurprising acquittal. For purely political purposes, cop-hating tyrants Governor Jay Inslee and Attorney General Bob Ferguson targeted an elected sheriff.

And they prosecuted a sitting sheriff based on an opportunistic newspaper delivery person, incited by politicians, political activists, the legacy media, and his own biases, to accuse Pierce County Sheriff Ed Troyer of—what else? Racism.

Sheriff Troyer happens to be white, and the newspaper delivery person, Sedrick Altheimer, happens to be black. Aside from exploiting those irrelevant facts, no evidence of racism exists. Altheimer’s actions, not his race, attracted the sheriff’s attention early that morning in 2021.

The NPA originally covered this story back in March 2021. Sheriff Troyer had spoken with KTTH radio host Jason Rantz. The 35-year veteran of the sheriff’s office said he was aware of an uptick in crime in his neighborhood. So, when he saw someone driving a car down his street with its lights off at about 2 a.m., he felt it was his duty to investigate. People argue he should have called the police. But he’s the sheriff.

In our earlier coverage, I wrote that Sheriff Troyer said, “he got dressed, and drove to see if he could locate the car to get the license plate (this used to be called good police work). Having already been accused of racism, he emphasized to the [Seattle] Times when he first looked at the car, he couldn’t see the driver’s race or gender.” Troyer said he located the car with its lights still off, “stopping at his neighbors’ houses.”

The sheriff’s critics wanted the public to believe Troyer looked out his house window, saw a car driving with its lights off, and only went to follow the vehicle because the driver was black. This what the radical left teaches people to think about race. But normal people don’t think like this. Sheriff Troyer is a law enforcement professional who’s never been accused of racism in his three-and-a-half-decade career.

Troyer said after he’d stopped Altheimer, the delivery person became immediately angry and asked the sheriff if he’d stopped him because he was black, introducing race into the incident. Troyer said he would have dropped the matter if Altheimer had simply explained he was delivering newspapers. That seems like the first thing anyone would tell a cop in that situation.

I’m still wondering why Altheimer was driving with his lights off. That’ll trigger any cop’s radar, especially in the wee hours of the morning.

Also, as Troyer knows, people use legitimate covers like a sales or delivery person as a ruse to commit burglary and other thefts. Happens all the time.

Troyer said after an angry Altheimer threatened to “take him out,” he called for backup. He figured the guy didn’t mean for a cheeseburger. Critics even used the sheriff calling for backup as fodder to attack him.

The Times reported that Troyer had “later retracted the claim the man had threatened him.” The sheriff explained to Rantz he hadn’t retracted the accusation. He said he decided not to pursue that charge “to lower the temperature of the situation.”

Next, this state’s appalling “leadership” decided to embark on a mission to waste even more of the state’s time and taxpayers’ money, pursuing made-up misdemeanors. They pursued a pretend prosecution against this elected sheriff in a case with no evidence he committed a crime.

But when you’ve got a tyrant, anti-rule of law governor who imposed some of the harshest CCP virus restrictions and lockdowns, responsible for firing many cops, and an attorney general who’s sued President Donald Trump 50 times, Troyer was just another bullseye for bullying.

Fortunately, Troyer had two things going for him. First, he didn’t do anything illegal. Second, he had a stellar attorney. Anne Bremner made sure the jury could see Troyer had done nothing illegal. Happily, the jury believed her and Troyer, who testified during the trial.

FOX 13 News reported, “TACOMA, Wash. – A jury has reached a verdict in the trial against Pierce County Sheriff Ed Troyer, determining he is not guilty on two charges stemming from an encounter with a Black newspaper carrier in 2021.”

The Gov. and AG really had to wrestle the law to deform the accusations into chargeable offenses. They charged the sheriff with two misdemeanors. One for false reporting because Ferguson chose not to believe the sheriff’s legitimate account of what happened. Instead, he gave the benefit of the doubt to a leftist opportunist because he and the story fit the radical leftist narrative to which Inslee and Ferguson have sworn allegiance.

They based the second charge, lying to investigators, on the inaccurate newspaper account that reported Troyer “recanted” that Altheimer had threatened to kill him when, which, as mentioned previously, is not what happened.

Sheriff Troyer told FOX 13 News, “If the AG had made me part of the investigation instead of the target, we wouldn’t be here. As Sheriff, I’m very grateful to the jury for their hard work and for their just verdict. The media made me out to be a racist, and the AG’s office made me out to be a liar. Neither are true.”

Will Troyer receive an apology from the media, community groups, Ferguson, or Inslee? Not in this or his next two lifetimes. Radical leftists never apologize because they don’t allow themselves to be wrong.

If you’re wondering why Inslee and Ferguson would go to this trouble since a successful prosecution was not likely, it’s because of other factors. It hinders a law and order sheriff from doing his job. And if they had been successful, according to FOX 13, “A conviction in the case could be legal grounds for voters to launch a recall against Troyer to remove him from office.”

We see this with a negative story about Troyer’s acquittal from The News Tribune (Tacoma/Pierce County). The Tribune’s Matt Driscoll tweeted, “With his back against the wall, Troyer’s instinct was to rely on tired partisan dog-whistling and us-versus-them police rhetoric. That’s who we elected.”

Also, and more insidious, due to bringing these charges, Sheriff Troyer was added to a “list of officers with credibility issues and a former U.S. attorney’s investigation found his conduct violated bias-free policing and professional standards” just like Ferguson and Inslee wanted.

If Troyer had done what they said he did, it would have been the violation they describe. But, because they’re sane, a jury didn’t believe Ferguson, Inslee, et al. What hoops will the sheriff have to jump through to get off that list? I guess we’ll see. Once the radical left gets ahold of a bone, it doesn’t like letting go.