Skip to content
How kids and cops reciprocate respect 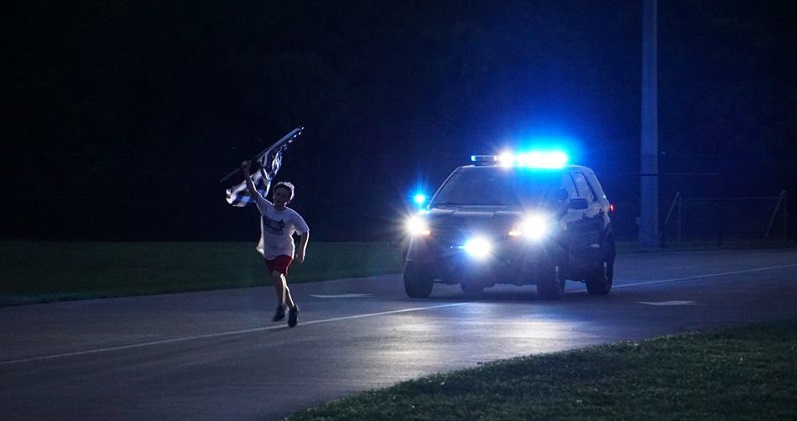 Despite the tsunami of anti-police din, diehard police supporters are waving Thin Blue Line flags and/or exhibiting cop-supporting icons and such. It is always refreshing to see adults act maturely and with objective reasoning, especially in the face of utter emotion-based drivel baselessly denouncing America’s frontline heroes.

Yet, in all of this divisive climate which our nation is enduring, another demographic segment is always worthy of consideration and examination: Youngsters.

In my days on duty, not once had I ever had to experience anything other than robustly, mutually enriching interactions between me and the kids along my beat. Some were shy. Others were bold and unambiguously enthused to blip the siren or activate the emergency lights in my squad car. Still others warmed up and merely wanted to be co-present with the uniformed people they understood as “officer friendly” upon whom they could always rely to save the day (or just banter for a few minutes).

I held dear that same mindset while growing up, watching NYPD cops do “The Job,” and it was the impetus for my unwavering aspirations to be a policeman.

Now retired from the street beat, as a law enforcement writer and researcher I am exposed to many life aspects with enormous informational value. One common denominator I seem to come upon and graciously appreciate is the unequivocal interest kids have in police culture. I mean, bias aside, who doesn’t wish for a superhero or two or three or 3,333 in their midst?

Among the many stories I avail myself regarding youngsters interacting with law enforcement officers in society, one stands out as a bona fide example of love, admiration, and respect for all police officials. This particular kid happens to be an avid runner…one who sprints while flying the black/white/blue colors otherwise iconoclastically known as the Thin Blue Line flag. 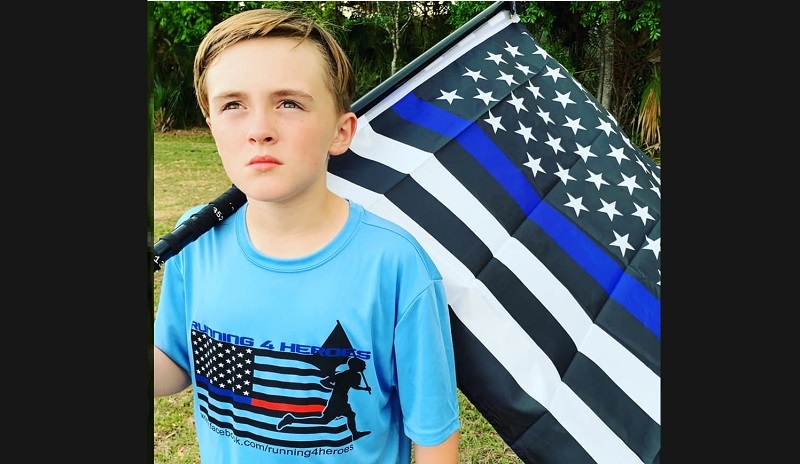 Eleven-year-old “Zechariah” and his family officially launched “Running 4 Heroes, Inc.” back in July 2019 (when he was 10) and has steadfastly committed to running miles on behalf and in honor of law enforcement officers who have sustained injury as well as those who have fallen in the line of duty.

Zechariah’s devotion to our beloved police officers has blossomed so much that he is now one among 50 finalists being considered for the ultimate honor of winning “Nickelodeon/Time Magazine’s 2020 Kid of the Year” award.

Having been a cop, having been an online follower, having been a writer who seeks to highlight wonderful pro-police individuals among us…my money is assuredly on Zechariah for the win. Frankly, he has already won (the hearts of many), and in this prestigious award I see an additionally earned bonus for carrying out an excellent mission reaching the hearts and minds of many more.

For me, it is not only the kind and supportive gesture replete with selflessness but also the undeniable sincerity with which Zechariah carries out the mission —his mission— on behalf of an infinite number of cops who he doesn’t necessarily know personally. No matter: his objective is centered in pure love for those who take up the fight on behalf of countless strangers (some of whom wish to do dastardly deeds to police personnel).

As Zechariah said upon his Running4Heroes.org website, specifically reflecting on the police nucleus, “These families sacrifice more than we will ever know. If I can bring even a little joy back into their lives, it is worth it all. They are the reason I run.” That is from a young soul mature beyond his years. Thank goodness for that; thank goodness Zechariah is not dissuaded by the anti-police diatribe and can see for himself the inherent values of police officers in a freedom-loving society which can sometimes go haywire, felling heroes doing great deeds for those they do not necessarily know.

In several ways, Zechariah befits the hero role quite well, exemplified in his constant deeds to herald heroes with shields—both police and fire personnel. Moreover, Zechariah’s runs for LEOs always commence with him holding the Thin Blue Line flag while he silently prays for the fallen and his/her loved ones and colleagues. Then…he is off to the finish line.

Zechariah’s indoctrinations include folding the flag he carried while running as well as hand-writing personal notes to the surviving family members of the injured/fallen, delivering both with donations from police supporters wisely investing into this youngster’s heartfelt mission.

Like most any selfless acts by just about any human, proper attention is fortuitously attracted and garners literal, physical followings of personal/professional enrichment. What do I mean by that? How so? Well, just take a glimpse (or two or three) of the Running 4 Heroes, Inc. website and you will denote the legions of cops who not only became aware of Zechariah’s respect and devotion for LEOs but that many have decided to join him in his pursuit of loyalty to and honor for those who don the badge.

Zechariah’s dedicated runs had the organic unintended dividends of amassing folks in harmonious happenings focused on fallen heroes, running in their own sneakers in the name of a warrior who earned the distinction, tribute, and merit of a young soul who happens to be fast on his feet.

Unlike COVID, Zechariah’s passion has spread in wonderful ways, with a burgeoning following to fulfill the mission which—one of giving back to those who gave all. Per the Running 4 Heroes mission statement:

“Running 4 Heroes started with a kid, an appreciation for our First Responders, and a mission to raise awareness and funds for those fallen in the line of duty.

“Zechariah Cartledge was born with the gift of running. He was raised with an appreciation for First Responders and all they do for the community. As he grew older, Zechariah decided to help the families of our fallen First Responders in a meaningful way. Encouraged by the mission and vision of the Tunnel to Towers Foundation, Zechariah began his journey raising funds for those families by running.

“In 2019, Running 4 Heroes officially became a non-profit 501(c)(3). Zechariah runs one mile for every First Responder who makes the ultimate sacrifice in the line of duty. He wants to honor those who gave up their life so we may live in a better world.

“Donations received go towards purchasing American Flags, which Zechariah runs with. He then presents that specific flag he ran with to the specific First Responder family in which he ran for. Another amazing way Running 4 Heroes utilizes the gracious donations you provide is by providing financial relief to injured First Responders and their families. Please consider donating today to help those in need when they need it the most!” How’s that for blue-blooded heralding and enrichment stemming from unspeakable tragedy?

As Zechariah summed it up succinctly: “Our First Responders do so much for us. I want to let them know they are appreciated.” In kind, America’s law enforcement professionals have Zechariah’s back as much as he does there’s.

A chronicle of Zechariah’s dedicated miles and for whom he ran in varying states is incredibly uplifting and motivational. 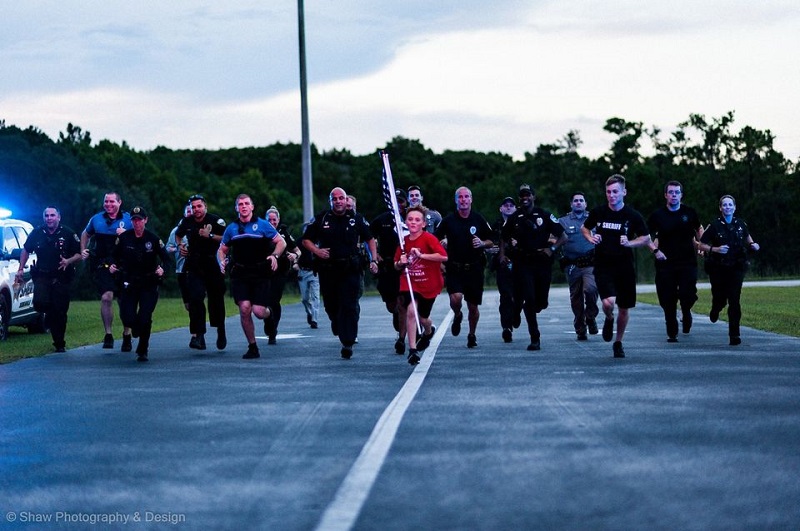 Zechariah is a definitive natural-born winner in my book…and has garnered the support of many, attracting notoriety for his compassionate persona. He deserves a run from us, so let’s stand behind him and pray he scores the “Nickelodeon/Time Magazine’s 2020 Kid of the Year.” He surely stands out among “Kids making a better tomorrow, today!”