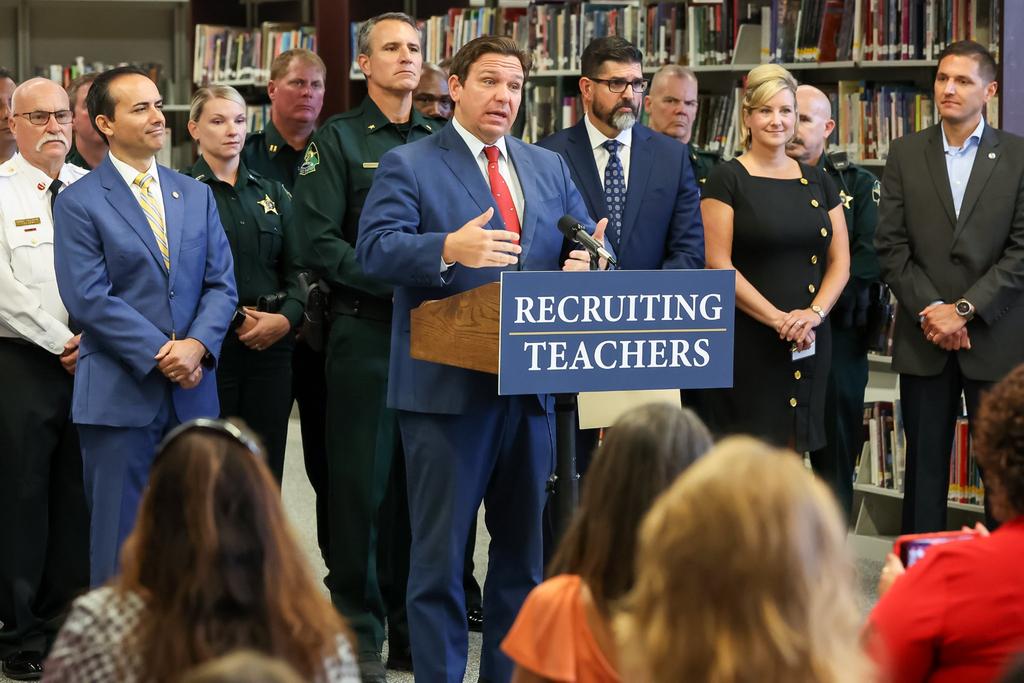 Florida Governor Ron DeSantis has introduced a plan to hire retired law enforcement officers to help mitigate the growing shortage of teachers in the Sunshine State.

“We believe that the folks that have served our communities have an awful lot to offer,” Governor DeSantis said on Tuesday. “We have people who have served 20 years in law enforcement, who have retired, and some of them are looking for the next chapter in their life.”

The basics of this initiative are that retired first responders hold a bachelor’s degree and satisfy Department of Education specs and then commit to two full years of teaching in a classroom.

Per Fox News, “The initiative would also expand the waiver of certification exam fees offered to vets also to all retired first responders.”

Another factor offered by the governor’s plan is that “Recipients would also be eligible for an additional bonus, beyond the initial [$4,000] signing bonus, if they teach in a Florida Department of Education identified critical teacher shortage [such as teachers of science, ESE, reading].” 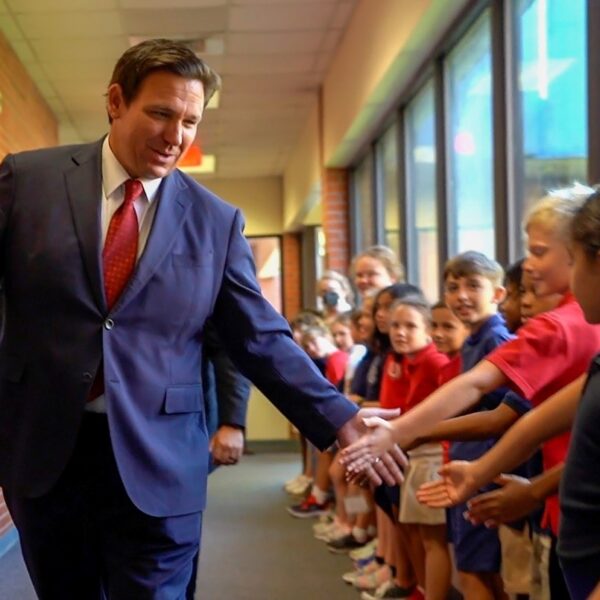 What else would Governor DeSantis’s program achieve?

It places enormously experienced, well-trained tacticians and strategists who are proficient in self-defense measures to be at the ready, on campuses, should armed evil traipse upon school premises.

In essence, the highly debated proposal to arm teachers, a concept widely circulated in recency, is effectively supplanted by having retired cops as teachers in our educational settings. Although I saw no mention of retired law enforcement officers teaching while also granted permission to remain armed with a concealed firearm, I wonder if this aspect is part of the governor’s plan. Or up for consideration.

He is former military and certainly pro-police, so perhaps this detail will be weighed in the context of real-time school security measures to either dissuade or stop the threat imposed by the eventuality of active shooters.

One may think advertising such a program would be enough to ward off crazed brains seeking to unloose horror. Steve Pomper’s recent article exposed a “manifesto” documented by a crazed brain offering insights regarding the mindset of one lunatic advising clones against hard targets. The prohibitions declared by this particular nutcase included the presence of armed cops —any sort of cops— so there’s that.

To be effective beyond teaching, of course, Florida would be wise to broadcast that former cops are armed and teaching within its schools. That unknown number may quash active-shooter mentality, as per the author of the manifesto referenced above. 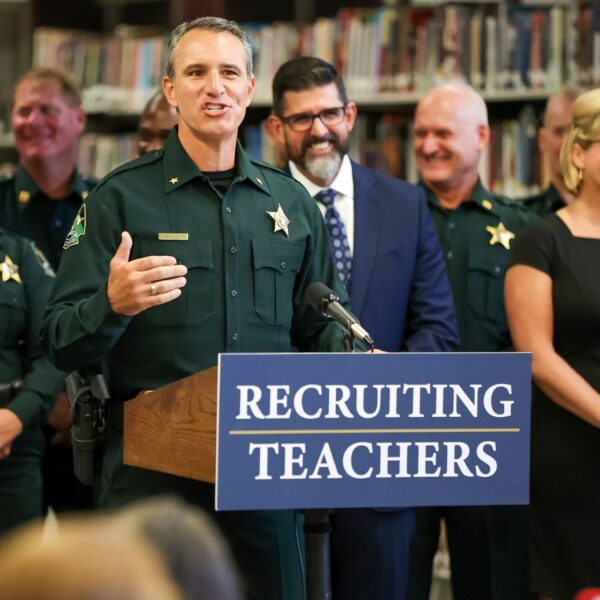 This proposal is receiving mixed views on various law enforcement-oriented forums. Some espouse enjoying retirement; deservedly so. Other cops think the idea has merit but may place cops-turned-teachers in the same corner as bona fide teachers who departed the profession due to the increasingly untenable conditions caused by school district demands and a climate hijacked by the unwieldy (unconstitutional) mandates spurred by the pandemic.

Stemming from the vaccine mandates, gobs of cops all over the nation are no longer in law enforcement, forced to either submit or resign/retire. The corollary is present.

Uniquely, though, Florida experienced hiccups with some teachers opposed to the state’s “Parents Rights” bill (aka “Don’t Say Gay” legislation) and the “Stop WOKE Act.”

According to a report by the Market Realist, “As a number of fields struggle to fill open positions, education is no different. Teachers are leaving the profession in droves, in part due to problems exacerbated by the COVID-19 pandemic. The Florida teacher shortage, shown by the Florida Education Association (FEA) to be at 9,000 teachers and support staff, is a point of concern this fall.”

While we are on the subject matter of an exodus of cops and certified teachers, Minneapolis elected leaders responsible for the anti-police push there made the news again, this time being blasted for an “agreement” stipulating white teachers are laid off before black teachers. Really!

From the Washington Examiner today: “A Minneapolis school district is defending its agreement with a teachers union to lay off white teachers before minority educators, calling it necessary to address ‘past discrimination.’

“Some legal experts have called the agreement, which stipulates that Minneapolis Public Schools must lay off or reassign white teachers before ‘educators of color,’ unconstitutional, with others predicting it will be struck down. However, the district defended its decision in a statement earlier this week, arguing it will help to support the recruitment of minority teachers.” Color over qualifications?

With that, Minneapolis teachers, especially those who are Caucasian, have a taste of the rancid climate and twisted philosophy of dubious governance endured by Minneapolis police officers.

Hopefully, no one decides to burn down a school after a court of law rules their “agreement” to lay off white teachers before any teachers of color is unconstitutional. Surely the Minneapolis police station asset ablaze by peaceful protesters was costly to the tax base.

Hard lessons in hard times revert back to our topic today: teacher shortage and first responders in the wing…

Technically, cops have been teaching throughout their entire career. Some, like SROs, were doing so formally, per assignment at a campus in their jurisdiction. 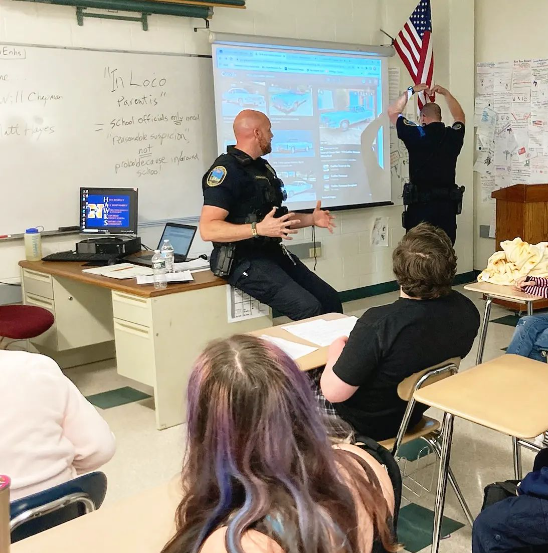 Informally, police officers exhibit their duty wares and specialized vehicles and canines and horses for school-age children during each semester.

And it’s not just within school classrooms and hallways. At the dawning of every new school year, cops on street patrol position themselves outside schools, at entrances, amid drop-off points, and in the immediate surface streets (directing throngs of anxious traffic). Like a long-settled then shaken snow globe, much is up in the air…and parents/guardians dropping off students may need some guidance.

Circling back to the mixed opinions from the law enforcement community, I read through several hundred comments, many underscoring how cops work the public venue for so many years, under extreme conditions, lately with ample anti-cop din, savoring the notion of surviving to embrace a serene retirement. 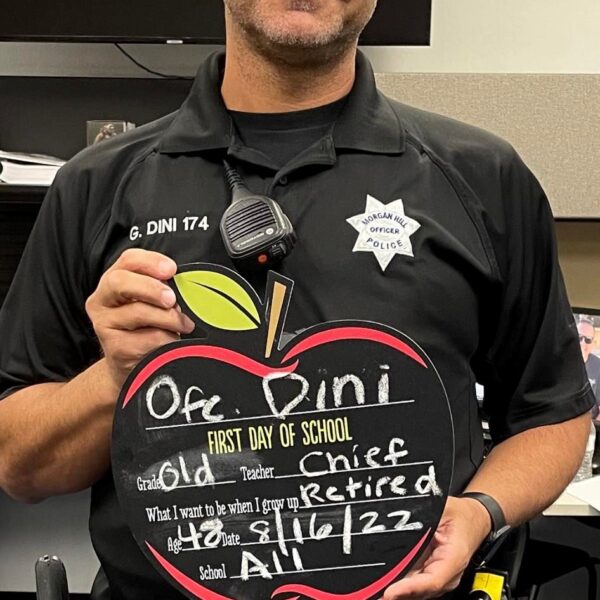 That spells giving themselves a pass from Governor DeSantis’s concept of retired LEOs taking attendance at the head of the class and cracking open academic texts. Respect for honesty. Kudos to each of those for making it out alive!

Pros and cons to most things…

According to the governor’s office, “we have people interested and applying.”