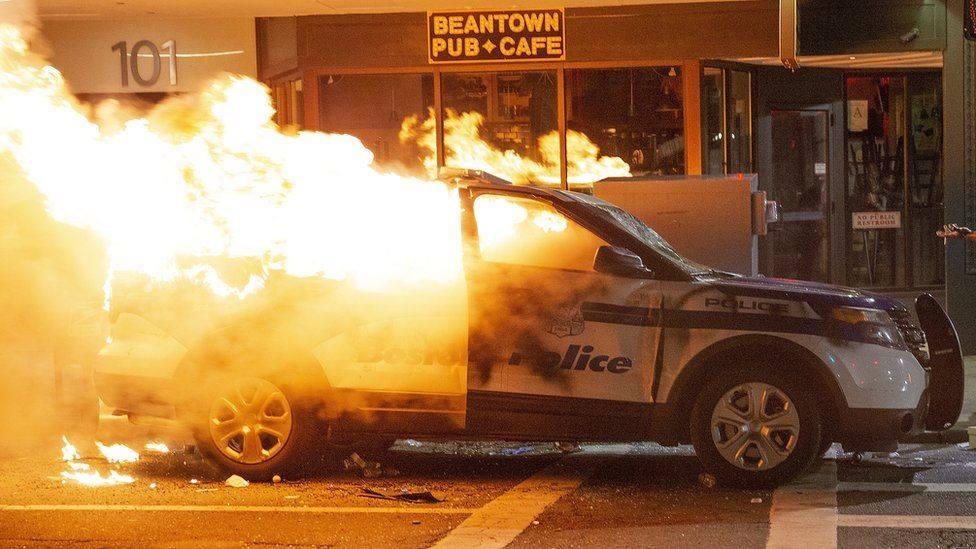 Indeed, there is one factor which shares a glaring identity among our nation’s anti-police jurisdictions, and it stands out like the sore thumb that it truly is: liberal-oriented political progressives chanting against the policing institution whose members try to keep malfeasants and mayhem at bay.

Just about every episode of the National Police Association’s YouTube channel “NPA Report” invariably explores this decrepit fact in one form or another, as told by watchful law enforcement-experienced professionals analyzing cops smack dab in the middle of the lion’s den.

It is no wonder, really, that many citizens have opted to uproot their entire livelihood and loved ones for pastures which hold promise, enhanced quality of life, and potential futures not threatened by the blatancy of criminal elements—a proverbial no-brainer.

National Police Association spokesperson Betsy Brantner-Smith, whose endowment in law enforcement, especially in the Chicago area, speaks volumes on the subject when she evaluates one prime example of reckless abandon perfectly performed by political forces wielding talents for pander.

Lately, we have begun to witness not only the exodus of great cops who are mistreated by abysmal politicians igniting the wick of soot-full hatred, we are also starting to glean data revealing the droves of citizens packing up and setting out on expeditions to new horizons.

One common reflection in those newly endeavored destinations shows conservative values and a political party that is largely proponent in many aspects in which their former enclaves exuded anti sentiments, namely funding and adhering to public safety essentials.

In essence, it boils down to humans of all stripes desirous and deserving of feeling safe. How can anyone even remotely prosper in geographic landscapes whereby the protectors are abdicated, themselves having to spend inordinate amounts of energy and scarce resources (another product of liberal politicos) to fend off the heft of barbaric behaviors fueled by so-called leaders?

Of course, that beckons the question surrounding who voted these demagogues and denizens in to their fiefdoms, leaving/allowing them to establish the ludicrous ideology that cops are bad for society?

Is it cop-hating politicians hell-bent on clones of their own? Are not all things in that sentence irresponsible notions?

Is it the constant echo chamber upon social media channels piping repetitious drivel unrelentingly debasing cops, declaring the law enforcement institution as an evil, racist, white supremacist, or any other manner of an ugly lie asserted by people who exhibit not a scintilla of reason or sound logic or critical thinking or rationale? Blind leading the blind?

This morning, a cohort was lecturing on the theory of sheep following poor “leaders” whose every utterance is simply and swiftly digested as if it is undeniable truth, when, in fact, the ludicrous fictions are easily researchable and justly discounted.

Just take the “all cops are bastards” (ACAB) moniker; the National Police Association and other law enforcement-oriented entities diligently and unwaveringly serve as a fact-patterned base for anyone to access, from which the unaware can freely and logically become educated by evidence and objective reasoning.

Fromm all corners and with varying kinds, thousands of police-involved stories depicting successes transpire daily across the American landscape. Granted, liberal-rooted leaders do not acknowledge these episodes of humanitarian greatness between police officers and citizens—truth be damned.

It is astonishingly uncanny and quite animated to watch some elected officials outright deny the existence of the wonderful feats performed by cops—the other perspective, as far as they are concerned, lessens their political purpose and threatens forfeiture of their power over people who seem unquestioning regarding truth and reality…what my morning lecturer today called a “massive set up to turn America into a communist country” by lulling people into a false sense that they will be taken care of by their elected leaders.

Really odd in retrospect that, once revered due to unprecedented heroism on 9/11, cops are now mortifyingly scapegoated largely for political grandstanding engineered to distract from their own inadequacies, namely properly caring for people in jurisdictions for which they vowed responsibility. Yet they’ll squirm away from debates seeking truth while arguing contrarian viewpoints without evidence, just mere shallow statements.

How soon some audaciously forget the grotesque scar left by the inexplicable reality we all experienced on 09/11/01, especially the public safety professionals who epitomized the very virtues of bravery and courage by unhesitatingly reacting to an unspeakable conflagration for which there really was no applicable playbook.

Since then, we keep hearing of cancer-afflicted police survivors, some spending their last years agonizing from 9/11-related terminal illnesses, saving lives from high-volume fallen tonnage…only to confront their own mortality via incurable illness. Makes me ponderous of the police oath of honor and peacekeepers in heaven.

Just this morning, NYPD police Officer Steven L. Rodriguez, a 9/11 survivor, reportedly succumbed to cancer stemming from his heroic acts at the Twin Towers. How are these cops even remotely worthy of hate and devaluation and abolition?

Just looking at those Twin Towers which stood iconic before September 11, 2001, conjures nothing but respect for law enforcement officials who step forward, full knowing that striding in advance could be their very last motion. They do it regardless. They did it then. They do it now, despite the dinful denunciation bugled by “leaders” in certain parts governed by progressives. Quite the irony that that very word —progressives— amounts to the exact opposite in terms of living in our everyday society. Where’s the proven honey in any of that word as it relates to liberal leadership? I see needless ruin…and I hear the constant rebuttal I told you so.

Cops were justifiably heralded immediately, while the literal dust was yet to settle, after which sifting through wreckage for survivors and bodies was starkly endeavored by men and women in blue.

Police officers who were at Ground Zero and somehow managed to get through the days with a never-ending reel of horror looping through the neural circuitry are forever impacted —there’s just no easy way around it— and yet have to watch their street-patrolling brothers and sisters scorned by haters spewing disgusting messaging and exacting physical abuse.

Although that brief video is from June 2020, we are still seeing the crux of what liberal-led cities allow to fester, sadly resulting in murder of innocents, including children tragically shot and killed in largely lawless locales.

Thankfully, there’s another layer in differing geographical regions from which to derive comfort, where people embrace law enforcement provisions and the contingents of men and women who deliver.

Pasco County Sheriff Chris Nocco extended a deserving volume of gratitude on Thursday, lavishing appreciation on behalf of his law enforcement officers and the members of the community who unrelentingly support their efforts toward safeguarding the county from the likes of mayhem such as that of Chicago, Portland, New York City, Louisville, Atlanta, Boston, Los Angeles, Houston, San Francisco, Austin, Minneapolis among an unfortunately storied list…all bound by that certain political party notorious for not only pushing police presence over a cliff but for also fanning murderous behaviors toward our devoted men and women trying to hold the line against criminals intent on victimization (and elected officials who are as complicit as the malcontents they aid and abet).

Here is what Sheriff Nocco said on Thursday: “Sometimes it is not thought of to have the power which it does, but the simple words “thank you,” along with a smile, have more impact than can be imagined.

“The support this community has given to your Pasco Sheriff’s Office members is humbling to say the least. We are blessed to have a diverse community that works side by side with us to improve the lives of all our citizens.

“We know that we cannot do it alone, and when a citizen walks up to one of us and gives us a word of encouragement, we are reminded that we are not alone. For together, with you, We Fight As One.

“Recently we have had several trainings where instructors have come in from out of town and are amazed by the partnership and positive relationship we have with our community. Again, we are blessed and thankful for your partnership and we know how special it is.

“We will remain humble to continue to serve all our residents, and we will be professional and innovative to continually serve all. Thank you again; your support and “thank yous” mean more than you will ever know.”

Notice he mentioned police instructors “from out of town” were impressed by the community’s cohesion and support for its law enforcement entity. Speculatively (because it isn’t  mentioned), I mull over which geographic area the visiting police instructors are from…to express admiration for close-knit police-supporting environments. Kind of bittersweet in the context of our subject matter.

As the wind blows, cops keep taking steps forward, even for those premised on backward thinking that a police-less society is somehow ideal. No one needs to play the fool for any jester (politician). We all have choices in the freest society on the globe—choose wisely…choose love over hate.