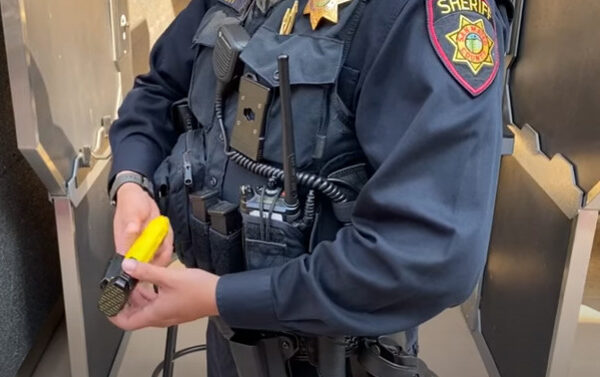 One of the things largely absent from the defund the police push is necessary equipment and technology to achieve activists’ oft-cited de-escalation expectations while also preserving a semblance of safety for our nation’s law enforcement officers out there mitigating matters posed by society’s woes.

Although criminals will always exist and contribute mostly chaos among law-abiding citizens, and cops whose diligent duty it is to safeguard innocent lives will always remain imperative despite the screamie-meemie anti-police tonsils contrarily blaming LEOs for just about everything imaginable, technological solutions exist to more effectively remedy precarious situations.

In particular, the country’s increasing prevalence of mental illness cases involving professional public safety officials equipped with human diversity and crisis intervention skills has not necessarily diminished. That is neither the fault of cops nor the afflicted citizens with whom they encounter via requested response or spontaneous happenstance.

In that specific context, behind-the-scenes forward-thinking figures have busily brainstormed and engineered potential devices to peacefully abate such oft-volatile interactions, with the path of least resistance at the fore.

A company called WRAP Technologies has the heart of what we’d all like to see in terms of safety for cops and citizens, as explained in its mission statement describing itself as “a global leader in innovative public safety technologies and services. WRAP develops creative solutions to complex issues and empowers public safety officials to protect and serve their communities through its portfolio of advanced technology and training solutions.”

I know of no one who would argue other than that sounds ideal, especially speaking from a police officer perspective.

Having said that and perhaps curious about what WRAP is referring to, the answer to one of their latest technological achievements for cops is partially in their company name: WRAP.

Otherwise known as “lasso technology,” BolaWrap “is a patented, hand-held pre-escalation apprehension tool for police that discharges a Kevlar® cord to restrain uncooperative suspects or non-responsive persons in crisis from a distance. The BolaWrap’s surprising sound and ability to restrict an individual’s movement buys officers time and makes it safer for them to approach and gain control of individuals.”

In addition to explaining the device they manufactured for police encountering volatile conditions and maintaining de-escalation principles everyone is especially mindful of nowadays, here is a PSA portraying WRAP’s BolaWrap device deployments safely subduing individuals without pain or deadly force while preserving officer safety:

Unfortunately, the acquisition of such a novel device for deployment by police will be hard to come by due to the harangues of police-defunding congregants and their fever-pitch to significantly slash police budgets. Naturally, as we have implicitly and/or explicitly stated here on the National Police Association pages and podcasts, cleaving funds for imperative police apparatus to effectively fulfill the public safety mission runs counter to ensuring safety of the public and cops sworn to serve communities and protect constituents.

I started following WRAP’s press releases early this year. According to one of their most recent revelations, “The BolaWrap is currently being tested and used by more than 570 agencies in the U.S. and 44 countries.”

Via their website and other social media conduits, they release bulletins describing success stories accompanied by actual bodycam footage of the still-minority of police agencies who tested BolaWrap and either scraped for grant money or had a wise city council embodiment astutely recognizing the super-success of such a novel device deployed by police assets toward safe encounters.

Then there are the liberal-leaning enclaves and their boisterous bunch of anti-cop platformers who are so dead-set on having their way that they have lost total sight of the citizen base who deserve better, much better.

Eternally optimistic, I envision that when anti-cop whiners come to their senses upon witnessing BolaWrap technology and its accomplished deployments, especially regarding mentally ill/combatant citizens safely taken into protective custody and zero injuries for all parties on scene, those self-important hugely egotistical government officials burning through gobs of campaign funds and falsely criticizing police personnel doing a difficult job…will see the folly of their posture.

On that note, here is a poster child for “security for me but not for thee”:

Incidentally, you may already be aware of a certain Missouri congressperson who defended why she spent around $70,000 of campaign funds on her “personal security detail.” It is the same federal politician who boasted “defunding the police has to happen.”

Welp, my research indicated that each BolaWrap device cost about $1000 and the cartridges around $30 each. Imagine how many cops could be equipped with $70K. That would be an authentic and integral way to “represent” constituents. Nothing like calling for progress then spitting on it when presented. Disingenuous.

I reminisce the big beckon for police-worn body cameras, the demands from the corners comprising non-experienced individuals who harbored utopian concepts of policing and deeply wished for Gotcha! moments when they saw something they didn’t like, even if it has been around for ages and effectuated with statute-based principles, purpose, and state-mandated training.

What happened when bodycams didn’t display what naysayers predicted? Egg on face.

As The Salty Sarge said, bodycams “It showed that 99.99999 percent of police officers conduct themselves everyday with courtesy and professionalism. It has also shown, which I can most certainly attest, the unfounded and baseless claims that many of our fine citizens have levied against law enforcement.”

Now, with the advent of BolaWrap, one can only imagine the cacophony of complaints from the anti-cop crowd. For one, the device has a loud pop when triggered. Equivalent to the Taser, the BolaWrap is outfitted with a laser beam which the officer uses to direct the Kevlar cord for accuracy (as depicted in the video above).

Besides providing propulsion for effective discharge, that popping noise is designed to stun the senses of the intended target individual, serving to distract just before the cord does its thing and subdues the subject as cops move in to effect safe and secure custody in terms of criminal arrest and/or state mental health law custodial stipulations.

Speaking of popping, WRAP also recently introduced another gem for public safety, one I wish I had when in service on midnight shift…struggling to stay awake for mandatory training which only occurred  during the day-time slot. It is called Wrap Reality, basically police training in a virtual sphere.

Chief Acevedo’s insights are these: “With VR training, you can train daily, and in as little as five to ten minutes a day, you can really create well-trained officers with good instincts and with good muscle memory.

Notice he said “I hope here at Miami PD.” That is a telegraph for local governance controlling purse strings to do the right thing, despite any anti-police sentiments in their ears or ill-conceived in their brains.

I often pondered the dirty sides of doing police work: catching criminals and securing funding to effectively do so.

Chief Acevedo is right about the real-time aspect and the immediacy and ease and savings in terms of traditional agency training significantly impacting ordinarily lean budgets. Although I was never assigned to my department’s Training Unit, I do remember how much planning and logistics and costs went into rolling out state mandated training on dictated intervals (annually, bi-annually, quarterly) under threat of jeopardizing officers’ police certifications if certain instruction was not accomplished in due time.

One other thing Chief Acevedo is correct about is revolution, to be taken in more than one context: revolution in technology engineered for public safety and revolution regarding those who command defunding the police, the former potentially defeated by the latter’s asinine assertions.

In case you’re wondering what role behemoth Amazon plays in this VR venture, I found some pertinence. Per a WRAP product plan, “Wrap Reality’s law enforcement training platform” will be enhanced “through AWS GovCloud,” so, they will serve as conduit.

Upon seeing BolaWrap deployments in the videos herein, it is apparent this modern-age instrument has applications which many have advocated for. The expense is the only issue, especially for smaller departments belted by tight budgets stemming from non-metropolis tax base.

I like the way the San Mateo County Sheriff’s Office framed their acquisition of BolaWraps for their LEOS: “Theyre’ not expenses, they’re investments.” Here is Sgt. Richard Cheechov who heads the department’s Training Division, along with some cool closeups of the device mechanisms:

Nevertheless, we pray this novel equipment makes it to the holsters and training rooms of as many cops as possible, provided for by funds doled for de-escalation dividends. Having been one, no one wants this more than cops focused on an uneventful encounter.

The next time(s) a defund the police bullhorn makes noise, maybe they can put their money where their mouth is and help facilitate the de-escalation merits. Until then…that’ a wrap.

(Sgt. Bob Bemis (Ret.) Director of Training for Wrap Reality, was recently the guest on the NPA Report)