Skip to content
Cops—Some Misjudge Them…Until They Need Them 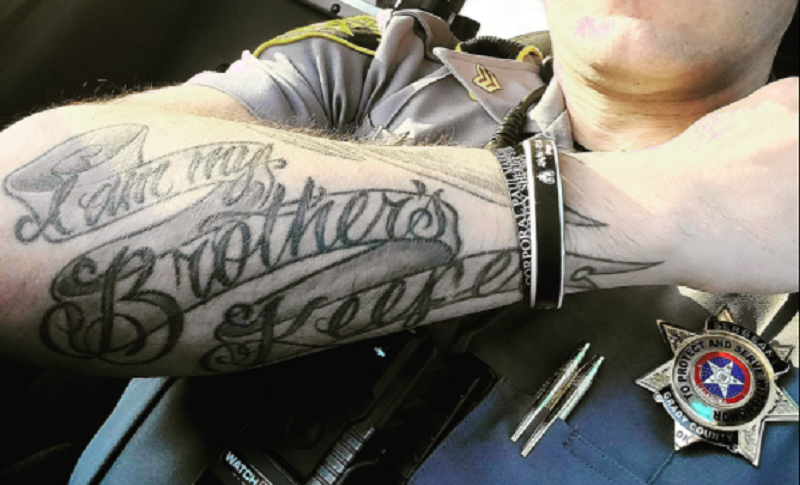 This is neither an indictment against tattoos and/or facial hair on law enforcement officers. It is, however, an observation of how we judge cops, institute policies based on misperceptions, and hold police officers accountable for trivialities while losing sight of their dedication to self-sacrifice and life-saving feats along the way.

We’ll look at a tiny revelation in the context of considering the bigger picture. I am referring to a freshly inked policy on police officers once again being permitted to show their…ink. Tattoos, that is.

I came across such a policy change involving the Bakersfield PD doing an about-face on its cops displaying tattoos. Historically, many American law enforcement agencies permitted body art, until they didn’t.

Not too long ago, that innocuous status allowing the same constitutional freedom to decorate one’s physical form made its way into the crosshairs of naysayers who somehow found tattoos to be unacceptable for whatever reason(s). Among the many things cops are subjected to in the form of agency policies and rules and regulations arguably depriving rights and freedoms based on baseless complaints, artwork is included.

My department was one which went with the flow of police agencies in the United States rolling back the time-tested portable police art. In my jurisdiction, it was a local elected official who had a beef with body art. His objection made its way to police HQ and the desks of command staff.

The prohibition is not on getting tattoos; it only stipulates that any body art must be covered (“uniform sleeves and long pants must obscure the full extent of the tattoo”).

In bake-fest Florida, that is no easy feat to accomplish and survive duty days in ballistic vest and an array of equipment dedicated to the life-saving mission. Though, sweating off a few pounds places less strain on belt-keepers fastening duty-belt accoutrements.

In general, LEOs’ tattoos are personal Hallmarks depicting the name of a significant other and/or names of their child/children or iconic career representations in the form of a justice badge, overall expressions of love and duty. Some display military icons denoting their service as soldiers of the Armed Forces.  Others portray imagery modeling their heritage. Reflections of patriotism and constitutionality are commonly inked tributes.

In a career-centric sense, Archangel Michael, Patron Saint of police officers, firefighters, paramedics and military soldiers, is a big hit among cops’ tattoo choices. Religious reflections and implicit protections thereof adorn cops’ arms. Some commemorate fallen officers. These are just a few among a wide variety of tattoos worn by LEOS.

Highly common are cops who have their police canine partner’s image portrayed on arms or legs. 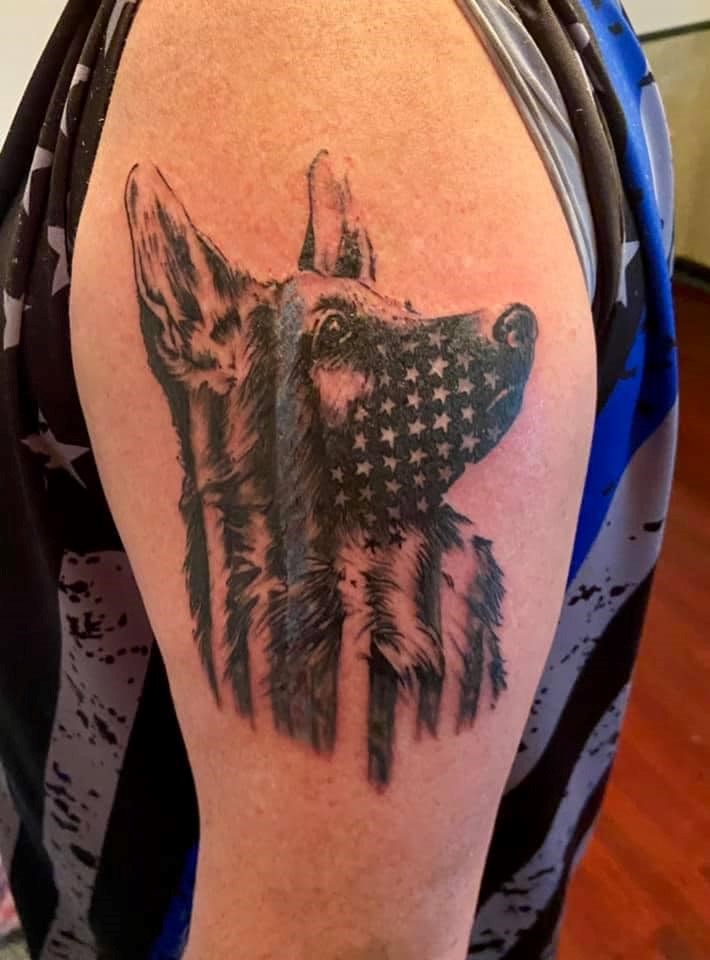 As one California cop framed it, “I have one of my K9 who passed away. It’s of his silhouette and badge number. I have the name of a friend of mine who died of Valley Fever, and then I have my dad’s badge number and my father-in-law’s badge number. I kept most of my tattoos on my upper arm for a while, and my sleeves covered them. But when I got one on my forearm, I did have to start to cover up. But since I was a detective, I could show my tattoos. It didn’t affect me like it did for these patrol officers who had to wear long sleeves in the middle of a 105-degree Bakersfield summer.” 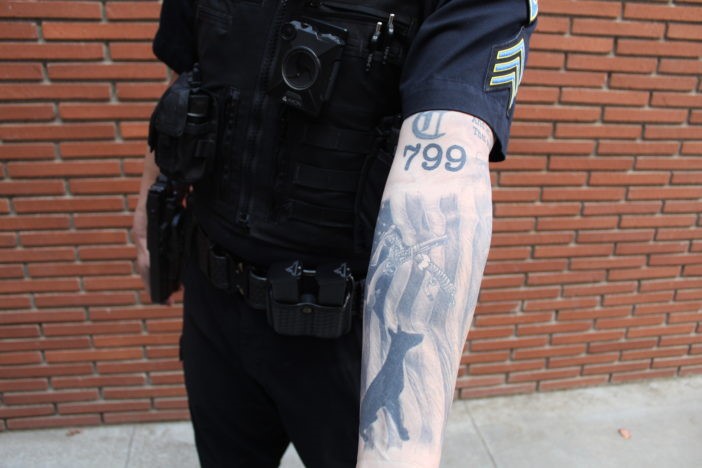 Thin Blue Line tattoos are common among cops, symbolizing devotion to duty and the small yet dedicated number of police officers who maintain law and order at significant risk to themselves. Lord knows how many prejudiced people throw around their dislike for symbolism identifying the risk-takers and lifesavers among American justice practitioners. How many news reports piled on stories regarding the anti-Thin Blue Line mentality, showing hatred for people anti-sorts know nothing about personally and professionally? 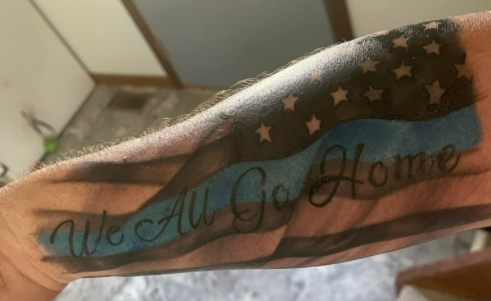 One of my department’s day-shift patrol officers had quite a collection of body art, all visible on both his forearms and both his calves, one of which was a heart with the word “Mom” scripted in the middle, ensconced by a flurry of doves. He got it done after his mother passed.

When our department implemented new policies regarding tattoos on its officers, the “covering concept” was launched. I recall the police union delegates getting involved, to no avail.

It came down from the brass: All exposed tattoos must be covered…or face consequences and discipline at the discretion of command staff (aka decide how many days suspension suit the grievance). That stance had more potential drawback regarding law-abiding citizens who could care less for tattooed cops…versus the few barkers who raised cane to have their whims satiated.

So, this particular officer kicked up dust for a spell, but ultimately opted to wear elasticized workout sleeves made of some lightweight, porous poly material (beats traditional polyester uniform stitchery) to obscure his arms’ and legs’ tattoos; it was the kind of material used by athletic figures, one’s which also absorb perspiration. It worked, even though his tan lines were beginning to make his figure look like a Picasso painting composed of varying shades of geometric shapes. (Florida police garb entails short-sleeve shirts and uniform-blue shorts, thankfully.)

After I retired, the agency went back the other way; typically how it works in law enforcement. Get a complaint or someone raises an issue for consideration, new policy initiatives hit the SOPs (standard operating procedures), more accountability for cops to contend with.

(Here is where it seems apropos to wonder how many crime victims rejected responding cops, the provisions of sanctity offered on-the-spot…despite what the rescuer looks like.)

Anecdotally, the tattooed police cohort I reference herein received plenty of inquires from crime victims and witnesses and passersby on his beat. Wearing mandated coverings, every single person had the identical notion and generally asked, “How did you get injured in the line of duty?” Wonderful to witness authentic concern and humanitarianism toward beat cops from citizens who are mature enough to not let idiosyncrasies creep in over a minuscule aspect of a fellow human being, one who is unmistakably rushing to aid others in dire straits.

The impetus for this writing stemmed from a complimentary piece written about the Bakersfield Police Department and its prohibition against tattoos on its officers being rescinded. Open arms are now extended. Why the about-face?

The answer lies in what everyone keeps reading or hearing about: Shortage of law enforcement applicants in America. Moreover, ongoing recruitment and retention issues largely influenced by the anti-police crowd and a climate of dissuasive ideologies have done more harm than good to public safety.

Bakersfield PD is among America’s law enforcement agencies trying every imaginable method to attract potential police officer candidates by shaving away some of its restrictive measures (including allowing beards), moving away from prematurely barring qualified recruits because of aesthetic markers someone found distasteful or offensive or just because they marvel over throwing stones at public safety officials who appreciate personal and permanent storytelling imagery—their rights. 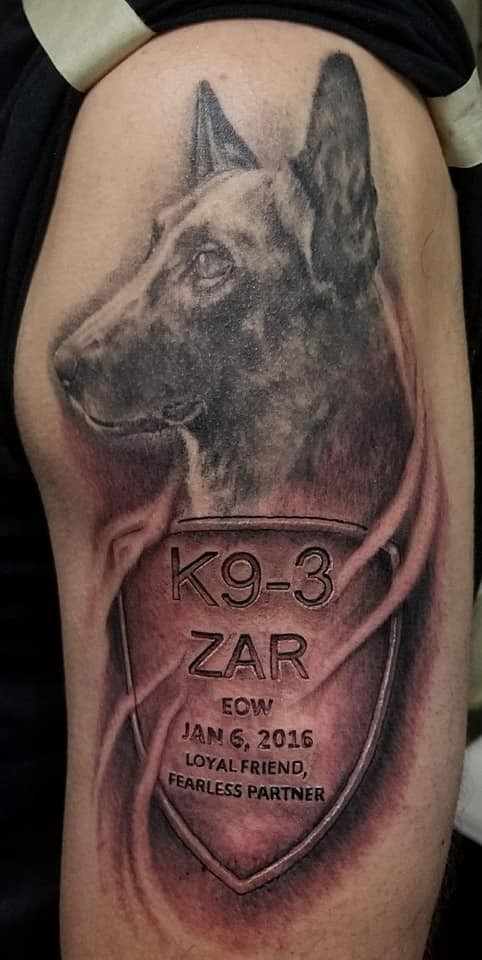 That was true before tattoos were prohibited, serving only to settle the kneejerk emotions of those who harbor disagreement and wish things to be their way, public safety be damned. But exceptions were made based on spiritual foundations and religious principles.

Starting to sound similar to the unconstitutional vaccine mandates cops have been subjected to, whereby religious exemptions had to be factored.

“In 2019, Bakersfield Police Department changed its policy for facial hair for its Punjabi police officers who are Sikh. This allows them to keep their unshorn beards, which honors their culture and religion, and also allows them to be who they are,” Arora wrote.

“Allows them to be who they are” is the chalice we all wish to grasp for ourselves. So why entertain rebukers of rather trivial fair when far more imperative issues are right under our sometimes-pierced noses?

As mentioned above, it defies logic that any personally violated human who found themselves a victim of crime in any extent is going to notice body art on a police officer when they are mind-scrambled and shell-shocked after being accosted by an assailant.

Regarding those who are not in the “crime victim” category, is it not evidence of prejudice when anyone renders assertions that cops ought not express themselves by way of collecting and endearing imagery defining their own life path and experiences? What is the actual harm?

None of this will matter in the remotest sense when, God forbid, an anti-tattoo citizen is downed by a mugger who fled with all their personal collections.

One scope to exemplify what we just said is from one of Bakersfield PD’s police officers. Officer Chad Dickson offered, “I get comments and questions about my artwork all the time. People love it, and it really helps them see me beyond the uniform, which helps me while I am out patrolling the community. People like to see police officers express their own personalities; it makes us more approachable.” Humanizing the badge has been a hot-button realm lately, one which appears to have homogeneity and concurrence among citizens and cops alike.

The bottom line is that our nation is hurting from unimaginable things in varying ways perpetuated by elected figureheads presiding over anti-police climates. Thus, we ought not be surprised when police applicant pools dry up after barrages of haters decry the presence of police professionals trying to save the day, no matter what their skin looks like. 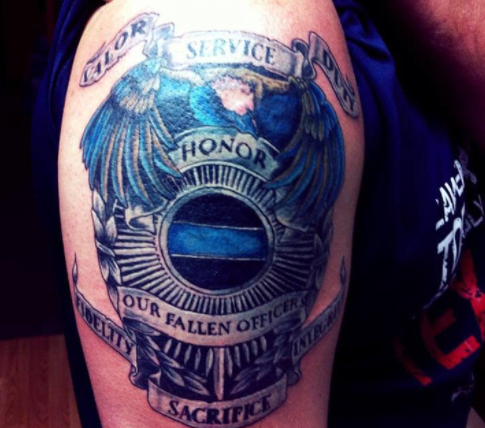 With the police defunders and abolitionists wearing plenty of egg on face lately, the innocuous nature of cops displaying tattoos is the least of our concerns (or should be).

Bakersfield police Sergeant Martin spoke on the issue, telling Behind the Badge, “The department is changing for the good, and I think it’s exciting to see. I think it is going to help with recruiting and getting more candidates to join us. We have a lot of good people out there and if we don’t start recruiting them, we are just going to lose them.”

Bigger fish to fry? Yes. Are we done browbeating cops over every scintilla of their personal existence? I hope Bakersfield PD serves as a modern-day exemplification of priorities in public safety and progress without radicalism stepping on duty boots.

I’d like to think we are done capitulating to cancel culture.

Never judge a book by its cover, right?