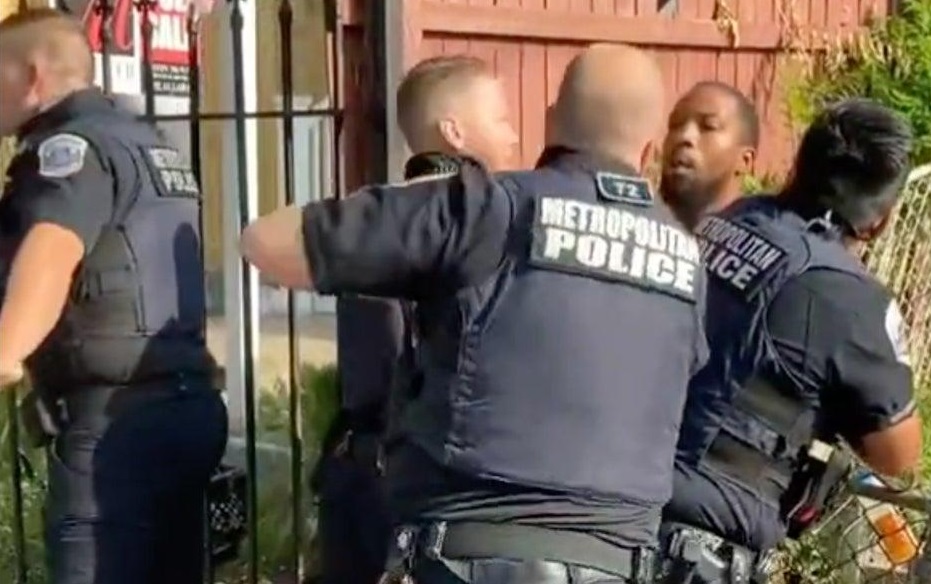 No matter how much one disagrees with the cops, one can always file a complaint later.

There is an alternative to “Comply Now, Complain Later.” Resist and hire attorneys such as Benjamin Crump who are accumulating fortunes representing, not condemning, resisting and fleeing.

Do lawyers like Crump serve the cause of justice? Maybe, sometimes, but no one can argue they don’t go after these high-profile “race” cases even when they include convicted felons making false claims against police officers doing their jobs.

For example, Crump’s list of clients includes Trayvon Martin, Michael Brown, Jacob Blake, George Floyd, and Daunte Wright. None of these folks were innocent victims. Martin had zero to do with the police but with a “white Hispanic.” Yet the viciously anti-police BLM used that incident, and later Brown in Ferguson, to spawn and grow its violent anti-police movement.

Now, Crump is eviscerating D.C. Metro officers for using “excessive force” against a suspected drug dealer, Kiman Johnson, while attempting to subdue the armed suspect resisting arrest. Does it look good? Of course, not. The key in the video is the suspect is refusing to surrender or comply with any of the officers’ commands. Increasing the danger, bystanders begin interfering with the arrest, throwing objects at the cops. Some in the media have framed this as “intervening” to stop the “assault.”

While watching the officers attempting to make this arrest, you may wonder why the officers seem stymied by the suspect. They’re not taking him to the ground and are laser beam focused on controlling his hands. There’s a good reason. As the charming bystanders heckle the officers with calls of “Bitch,” you can clearly see an officer withdraw a semi-automatic handgun from the suspect’s waistband.

Pause, and let that sink in, which is a hallmark of critical thinking. The officers say they knew the suspect was armed after they felt a bulge in his waistband. Their actions appeared consistent with this knowledge. They could not allow the suspect any possibility of drawing the weapon and shooting or tossing it to one of his comrades. It turned out to be a fully loaded .45 caliber handgun. Punching an armed suspect in the face a few times, which apparently caused little injury, is the least these officers were justified in doing during this life-threatening situation.

Seemingly ignoring the facts, Crump tweeted, “Three DC police officers are under internal investigation after video shows one officer repeatedly, brutally punching a man as fellow officers restrained him. No matter what took place, this excessive use of force is disturbing & UNACCEPTABLE!!” The suspect was trying to reach for a gun in his pants, so he could shoot cops. That was UNACCEPTABLE.

The suspect was armed and not under control. While it is Crump’s job to vigorously defend his clients, he veers off the path of sanity when he accuses officers of excessive force while they’re attempting to arrest a violent, resisting, and armed suspected drug dealer.

Crump’s statement makes no sense on its face. His goal is to exacerbate an already polarized public by creating false expectations where there exist no possible circumstances where any police officer’s use of force is ever justified. I mean, “pretty please” just doesn’t always cut it with armed drug dealers.

What is more infuriating than an attorney polarizing the public?   When the officers’ own chief of police (sorry, chief of mayor) hurls his officers headfirst into the radical leftists’ anti-cop incinerator.

D.C. Police Chief Robert Contee said the officers are under criminal and administrative investigation. For what? A criminal investigation for, once again, doing their jobs under some of the most challenging circumstances imaginable. This pathetic excuse for a leader of cops said, “I am embarrassed, disturbed, disheartened, and ashamed of what I’ve seen.” Really? Well, cops are feeling the same thing… about him.

He feels this way because he has no idea what actual police work looks like. Maybe he did at one time, but it’s not likely he’d get hired as chief in such a radical leftist city if he were a real cop. Consider this enormously reckless and inane statement:

“While getting illegal firearms is a priority for safer communities, this is not the way we train our members to get illegal firearms off the streets,” Contee said. “MPD prides itself on treating everyone with respect, even when we are recovering guns and taking some of our most violent criminals off of our streets, it will be done constitutionally and respectfully.” Constitutionally? Yes, of course. Respectfully? That’s up to the suspect.

The armed suspect wouldn’t surrender, which means he wouldn’t give up the gun, which was only inches from his hand, and still on his person. I wonder what Contee thinks would have happened if that suspect had been able to draw that fully loaded firearm from his waistband? Or if he’d have tossed it to one of his buddies?

Oh, I know… Maybe he planned to give the officers a helpful demonstration on how to administratively unload and fieldstrip the .45, clean and oil it, reassemble it, turn the gun over to them, and then peacefully handcuff himself for the trip to the pokey.

No, it’s much more likely, if he could have gotten his hands on the weapon, he would have shot at officers. At least, that’s what those officers would have to bet their lives on, right? Though the chief apparently prefers the officers risk their lives rather than give a resisting, suspected armed drug dealer a couple pops in the snout. If the chief were a real cop, he’d know what those officers faced that day, and he’d award them commendations.

The D.C. Metro police union released a statement that bolsters my contentions. “The officers physically determined that there was a weapon in his waistband and that the suspect was making efforts to retrieve it. The suspect made every indication that he was not afraid or reluctant to use the weapon.” Forget punching him; they would have been justified in shooting him.

This is why organizations such as the NPA exist. That arrest should not be controversial, but anti-police activists are teaching people it is. Cops today need all the help they can get to educate the public and, evidently, pathetic police chiefs, in what, why, and how the police do what they do.

The D.C. police chief knows his words enhance the radical leftists’ argument and help to facilitate the accused police officers in losing their jobs and maybe even going to prison. According to the police union, the department had specifically deployed those officers to that area to address “gun violence” and to get guns off the streets. That’s exactly what those officers were trying to do. Hey, guys, this is how your city thanks you for risking your lives for them.

As the NPA puts it, “Any city that releases armed resisters without charges while threatening to prosecute the cops who overcame the resistance, recovered the gun and made the arrest, should be walled off to keep the rest of us safe.”

The accused police officers have had their “police powers revoked and [were] placed on non-contact status pending investigations.” But it’s a different story for the suspected drug dealer who allegedly was trying to pull his gun on those cops.

WJLA TV reported, “Meanwhile, the U.S. Attorney’s Office said the suspect arrested was later released with no charges filed against him.”

The officers risked their lives for their community to get illegal guns off the streets for “no charges filed against him,” while the city considers filing charges against the cops.

The line for infuriated Americans forms behind me.