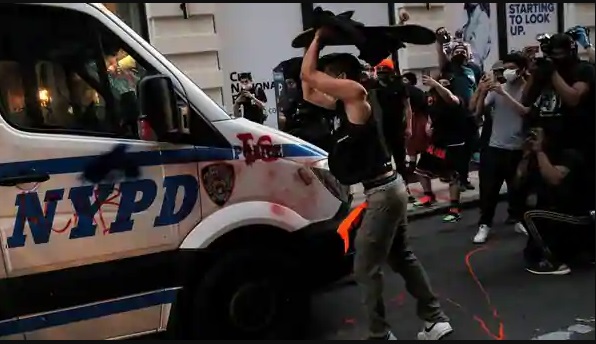 It was George Washington who said, “The name of American, which belongs to you, in your national capacity, must always exalt the just pride of patriotism… It should be the highest ambition of every American to extend his views beyond himself, and to bear in mind that his conduct will not only affect himself, his country, and his immediate posterity, but that its influence may be co-extensive with the world, and stamp political happiness or misery on ages yet unborn.”

That sobering reminder materialized from my police chief (retired) who, like me, like you, is watching with bewilderment the politicos and their bills seeking to knock the legs out from under our nation’s valiant law enforcement officers.

The House passed the “George Floyd Justice in Policing Act” which, among other things worth arguing, contains doing away with qualified immunity protections for cops who, during the course of duty, make those proverbial split-second decisions with the right intentions and deserve defenses against being sued civilly by litigious-minded people (and attorneys who egg-on the cause). Doing away with qualified immunity in effect can scoop away any savings cops were somehow able to achieve in a profession which is hardly known for riches.

Likening qualified immunity to automobile insurance required by law in the event a traffic crash ensues and damages need mitigation, doing away with the traditional protection for police officers is nothing shy of hanging them out to dry like trivial intangibles. Far from it, and that is why this overreach is so ludicrous, no matter how it is packaged by whoever misguidedly harps so-called merit.

In context, the applicable rhetoric remains: Why would anyone wish to become a cop or even remain as one when deserved protections are removed, leaving them quite vulnerable to a life of ruination for conducting themselves with good intentions?

Well, I can attest there are noble-minded individuals out there patrolling the mean streets, while police academies continue to train/graduate cadets to bolster the already depleted ranks. How this will all shake out remains dubious.

And it’s compounded by what the House of Representatives refers to as “short titles” pertaining to the anti-police bill, citing:

Given the astute nature and intelligence among NPA readers, I confidently assume the verbiage used in these titles is interpreted for what they are —implicit triggers— what Republican strategist Alex Conant conveyed: “What the Democrats are doing now is typical of the Democrats: too much emotion and not enough actual substance.”

Indeed, trigger-happy and emotion-laden titling designed to muster support under the guise of fact where none exists was recognized in today’s Reagan Reports for America: “Congressional Democrats are baking some of their most controversial policy proposals into American-as-apple-pie bill titles as they try to enact a stridently liberal agenda with razor-thin majorities in both Houses.” Indeed, we have bearing witness to liberal-run jurisdictions dismantling police forces with state statutes audaciously countering what it takes to effectively implement public safety initiatives and operations for citizens at large.

Maryland abolished the Law Enforcement Bill of Rights, per a revelation this morning from a Baltimore cop: “Some people even argued on behalf of the police, saying unfounded complaints should not be made public because they are unfounded and could ruin an officer’s reputation. They passed it anyway. That means anyone can file an erroneous claim against an officer and it will be made public for the world to see. I can now say for sure, that I do not foresee a long career in law enforcement. I love the job, but cannot watch such malicious disregard for public safety.”

And who could blame other cops with sentiments like the one above, subjected to the same disrespect and outright disregard while also confronting increased perils born of bogus bills written/approved by folks who have zero idea what it is like to don a justice badge.

Virginia passed its police reform bill in September 2020, with “sweeping” police reform measures which excluded qualified immunity, wisely recognizing the need to maintain protections for LEOs. As Virginia Beach Delegate Jason Miyares (R) said, “The problem with this bill is it is going to have unintended consequences of hurting good cops,” implying the fractional few bad apples targeted by broad-brush legislation will needlessly bastardize the bushel.

Months ago, I wrote an article covering Virginia’s ideological considerations grossly mischaracterizing cops and writing bad bills to the detriment of the public and the police in roles to protect them from criminality. Virginia legislation flies in the face of reason and rule of law; it is also disingenuous to mandate cops do what they’ve been doing for many years (i.e.: “Require law enforcement to exhaust all other means prior to using deadly force”).

Astounding how some folks can write rules for something about which they know nothing (and get paid for it, handsomely). Yet the beat goes on…

Dear lawmakers: Cops do exercise all avenues, despite angry barbarians unhesitant to kill cops, especially because of the criminal-coddling climate created lately:

The persistent problem with respect to reform initiatives is the mindset that broad policy changes are necessary because of flaws of a few. And it continually irks when legislators shirk responsibility of considering easily attainable fact-based empirical data and statistics debunking assertions that law enforcement is the problem.

Conversely, scapegoating is the chosen option instead of truth, thus maligning a noble profession in which self-sacrifice is assumed and life-threatening assailants are empowered by misguided elected officials who cement high-paying tenure roles in fiefdoms by pandering to constituents who put/keep them there with echoes of illogical promises followed by reckless lawmaking.

As Virginia House Minority Leader Todd Gilbert articulated with regard to police reform measures being considered back in September 2020, “Sadly, the majority was so bent on punishing law enforcement that they refused to listen to reason.”

Aren’t we seeing this play out federally, with the George Floyd Justice in Policing Act? One cop primarily caused that travesty, yet the lot of 900,000 or so LEOs in the U.S. will pay the price.

In response to the George Floyd Act which was introduced by Democrat Rep. Karen Bass (CA) and co-sponsored by 199 others with a parenthesized D, a conglomerate of Virginia law enforcement associations proffered a letter to both Virginia’s U.S. senators, addressing the preposterous premises in the Act: “This bill will have a devastating impact on law enforcement and endanger law enforcement officers and the public and we believe would open the door to countless frivolous lawsuits.

“Eliminating qualified immunity will keep law enforcement officers from making crucial, split-second, life or death decisions to stop a lethal threat to the officer or the public. Innocent citizens and officers will be hurt or killed as a result.”

Writing for the New York Post, Rav Arora distilled the subject matter quite well, concluding his article with, “Otherwise, this cycle will inevitably repeat itself several times over—it will be sensationalized to fit broad narratives of ‘systemic racism,’ further misleading the public and fueling radical activists and naïve politicians to take measures that only harm black lives.”

Not only do these legislative actions filleting the police mission place cops squarely in the crosshairs (increasingly in the literal sense) but also American citizens’ welfare as promised in our Constitution.

How does a sacred document practically guarantee “life, liberty, and the pursuit of happiness” when newly established contrarian laws hamstring cops from addressing criminals in their midst? Virginia is a good example of how bad policy will inherently invite/foster criminality with a gold-stamp guarantee that police will not pursue?

Counterintuitive? Absolutely, defying logic and deifying bad actors…and innocents crossing the streets are nothing more than sheep in the pathway of wolves behind wheels.

As written in response to these and similarly zany legislative maneuvers whittling cops down to nothing while criminals are easily emboldened, lawmakers’ nonsensical notions just may conjure cops defending themselves with spitballs.