Skip to content
Border Patrol: Combatting Cartels at Walls and On Water 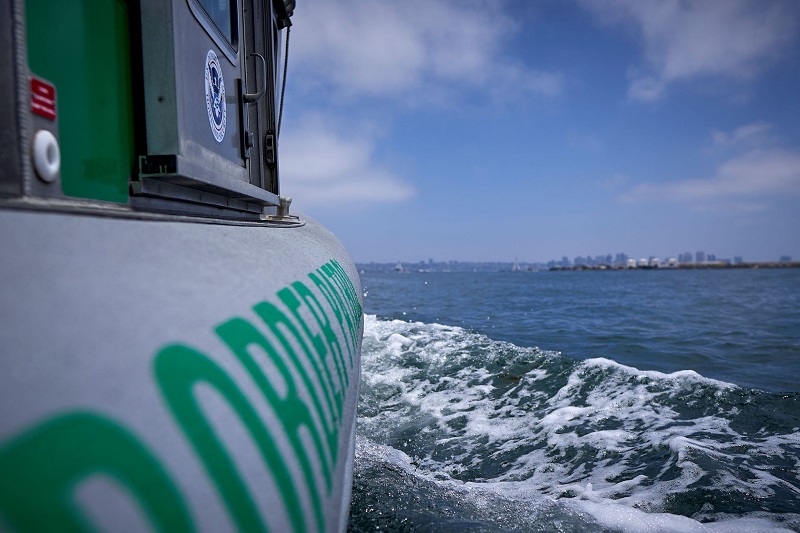 The incessant flow of illegal narcotics cartels relentlessly pushed into our country is astounding—even as the White House seems meh on the matter. The mainstream media is not necessarily informing the public of the scourge either. Surprised about any of this?

That’s why I prefer to go directly to the boots-on-the-ground and watchers-on-water sources.

Despite U.S. Border Patrol agents fighting the good fight and repeatedly pleading the case of our border wall abomination —the fester that just doesn’t seem to register with certain DC promise-breakers— the waterways are just as rife with bad stuff developed by cartels and shipped on all manner of flotation operated by hired mules who, when nabbed, take the fall. Law enforcement officers take the haul of deadly fentanyl and whatever junk the drug lords are peddling by the tons.

Following all of the federal law enforcement agencies, the massive quantities of a variety of hardcore narcotics baled for transnational navigation are chronicled on the U.S. Border Patrol social media sites and their cbp.gov site. So chronic are their daily incidents with illegals and contraband that they’ve made it simple by publicly posting mega catches every few days. Similar to the cop show “The First 48,” Border Patrol agents list their activities and catches of criminal enterprising, in the aggregate, aptly named “Past 48 Hours.”

The numbers are shocking! And showing little indication of slowing down.

“Of the 13,027 encounters, 2,461 came from 12 large groups, with over 100 migrants in each group at different times,” the Border Patrol bulletin distinguished.

Today, I came across a press release availing the hordes of cartel narcotics sleuthed and seized by federal agents bolstered by police officials from Puerto Rico. The dividends spanned three days of police work.

(Photo courtesy of the US Border Patrol.)

Exemplified in that picture is the imperative nature of various forms of government to forge task forces and work together, hence the multiple plaques signifying coopted agencies aggregating bales of contraband seized during three calendar days, culminating in piles of poison that will make it to a destruction depot and not the streets of America.

Although that catch is one among many like it, perched atop a picnic table, we can be certain it was no picnic for the men and women who go after it daily, at enormous risk to their lives.

For example, here is the breakdown of what the task force netted in the three days:

No personal use there, which means mules and couriers carrying the junk always pose a significant threat of violence. I’ll assume you are aware of the cartels’ penchant for murderous intent when their “product” and “livelihood” are impeded, cops or not.

As a US Border Patrol spokesperson said of the tally above, “Staggering Numbers!
Incredibly proud of the men and women of the U.S. Border Patrol!”

Pride and joy from a cop’s point of view, including all law enforcement members surviving without casualty after long stints on fathoms of often topsy-turvy water, maintaining due care of the cuffed perpetrators who, now they are apprehended, harbor desperation of what cartel bosses will do to them for sustaining a tremendous loss of product and gluttonous profit.

Waterborne police operations generally consist of a constant patrol of the seas. Additionally, our monstrous system of surveillance via satellites and other technological instruments (unmanned drones) scans the seas and scrutinizes maritime movements round-the-clock. For instance, the US Customs and Border Protection Caribbean Air and Marine Operations Center houses interagency partners, all dialed into telltale signs, relaying intelligence/suspicions to cops in boats and aboard aircraft.

(Photo courtesy of the US Customs and Border Protection.)

The federal government has Ops Centers in regions around the nation, each responsible for a certain slice of the American pie (both land and sea).

One of the aspects not often taken into account by consumers interested in bulletins like this or snippets from police agencies posting about their successful field operations is the additional responsibility of safely securing typically malicious (“16 firearms” seized) transnational criminal organization worker bees (who officially failed notoriously violent drug lords) for the nautical navigation to a secured port typically operated by a government agency.

There, suspects are carefully deboarded, processed, and secured in a temporary holding facility until cops transport their arrestees to the main jail facility.

Having been a secondary officer on our department’s marine unit, policing the waterways during holiday celebrations, primarily focused on BUIs (boaters under the influence), I can tell you it felt similar to some symptoms of vertigo: chronic balancing, bracing with movements, distractions from the water’s constant change in direction, the sounds of waves slapping the boat, etc. All that…while holding steadfast and sizing up potential suspects, heightened by whatever access they have to weapons onboard.

Getting off our police vessel at the end of a 12-hour shift, touching land always felt weird, like the ocean motion followed. In the case of BUI arrests, the responsibility of due care for people in custody was often lampoon-like. Try deboarding a drunken individual, many of whom are spewing nasty phrases having to do with denial of drunkenness and heavy concentration on getting their boat back.

Speaking of boats as vessels involved in the crime, we often had to become tow-truck operators on the waterways. Safely securing the arrestee’s boat to ours, we sorta limped along, responsibly ensuring the welfare of the suspect (falling overboard handcuffed would be bad, very bad), the sustenance of his craft, and wondering if the sea is gonna play nice.

In any event, my city-cop excerpts are small-scale in comparison to the ongoing police work by Border Patrol, handling deluges of drugs, armed mules, human smuggling, and any manner of US-bound immigrants focused on making it through the line.

Bravo to the Border Patrol for handling what Joe can’t won’t help fix.