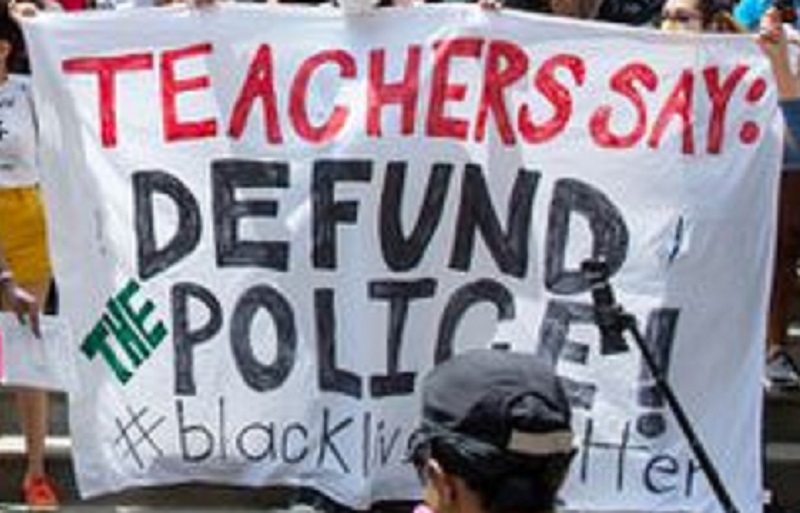 While no one wants bad cops going from one jurisdiction to another, we also don’t want good officers sacrificed on the altar of wokeness. And we know what the radical left’s definition of “bad” cop is: all cops.

It could be illustrative to contrast two public employee groups: public education and public safety (police). The two groups are treated very differently. For example, during my entire career, the police never went on strike. For one thing, it’s illegal. However, it’s also illegal in my state for public school teachers to strike, but some school district teachers went on strike nearly every year. They’re never held accountable for it.

Now, some governments protect public employees by sheltering or shell-gaming them, most infamously with New York City public school teachers, is nothing new. But New York’s Democrat lawmakers don’t seem at all concerned about bad teachers as they are with all police.

What can you say about people who want to tear down traditional American law enforcement and want to rebuild it using a blueprint that precludes effective policing can even exist? We have the attacks on police officers’ qualified immunity, uses of necessary force, the ability to pursue suspects—also on foot, and even their First Amendment rights to free speech and to peaceably assemble.

Last April, CBS News reported, New York State Senator Brian Benjamin introduced a bill that would make it so “officers who resign while under investigation, while they are the subject of disciplinary action that could result in their termination, or while facing pending criminal charges resulting from their actions while on duty would be unable to be hired in the state as a police officer. The law would apply to police officers coming from out of state as well.”

This may sound sensible, but we must consider the source. Sen. Benjamin said, “Accountability is a must. It’s the first step to justice.” He also said, “If you have the power and privilege to enforce the law, you must be held to a higher standard.” No, not a higher standard. He and other radical leftists wants to hold cops to an impossible standard. He’s clearly interested in setting up cops for discipline, so they will be fired, and force them out of their profession.

Some might call it revenge for whatever myths of which he believes cops are guilty. Then he gives himself away, sounding like a pimply-faced college radical he said, “That standard has to include making sure cops know they can’t just do whatever they want to do.” How juvenile and insulting is that? Oh, yeah. And so’s your mother!

He just told America how he thinks cops think. Oops! His anti-cop bias is leaking over all over his nicely tailored suit. But he doesn’t seem to care. He shifts his cop-hating into 6th gear, saying, “The culture of policing is so toxic that this kind of a situation with Kim Potter and Daunte Wright could happen and enough is enough. We have to be much more aggressive and much more clear.” Potter killing Wright was almost certainly a legitimate and tragic mistake. Doesn’t matter, does it? Not if it’s a law enforcement officer making the mistake.

This is where, even if you are on Sen. Benjamin’s bandwagon and support his legislation, you have to hop off, knowing his motives are tainted, apparently believing all cops are bad cops. He believes his bill is “common sense.” Which is something any cop knows, coming from leftist lawmakers, is not common, and it doesn’t make any sense.

Anyway, CBS also spoke with Reverend Al, and he likes the bill, so it must be good, right?

This legislation is right out of the leftist’s playbook. Take a kernel of an idea that has the merit and then coat it with political corruption. Officers are being unfairly fired and incarcerated all over this nation by “prosecutors” who, like Benjamin, clearly hate the police. This is evidenced by the number of officers who are later exonerated or otherwise vindicated.

Take the case of Atlanta police officer Gerrett Rolfe who shot Rayshard Brooks after Brooks fought with him and his partner, stole a Taser, and shot it at Rolfe while attempting to escape. How dare the officer try to defend himself. Or is that the “higher standard” Benjamin is speaking of. The standard where people have the right to defend themselves from violent attackers, unless they are police officers.

Even Reuters gets in on the anti-police act, making sure to note Rolfe shot Brooks “in the back.” Funny, they didn’t explain Brooks was running away from Rolfe at the time Brooks reached back with his arm and shot the Taser at the officer. The only target Rolfe had was Brooks’ back. But, what would a legislative attack on cops be without journalistic allies?

Now, let’s draw the contrast in how governments treat public education employees compared with public safety. This has led to another arrow in the quiver of woke, anti-cop lefties. While New York State government wants to prevent officers from being hired by other agencies if they’ve been fired, forced to resign, are under possible discipline that could include termination, or have been criminally charged. And the onslaught continues. No other profession in this nation so maligned by leftist forces.

The New York Daily News reported last month, hundreds of teachers held within a controversial “teacher pool” will be given permanent teaching positions. Called the Absent Teacher Reserve, in 2018, the New York Times reported the 1,202 teachers cost the city $136 million… to keep them on the payroll….” All while defunding the police. Leftists are willing to keep bad teachers on the payroll while simultaneously they’ve proposed legislation to prevent “bad” cops from accepting positions with other law enforcement agencies.

Public education is the institution in need of reform not public safety. In 2013, John Stossel produced a documentary called Stupid in America, denouncing, among other things, bad teachers protected by vicious, radical leftist unions and politicians.

Now, while leftists are going after cops’ legitimate legal protections, the truly deplorable, American Federation of Teacher’s (AFT) President Randi Weingarten is announcing a legal defense fund set up for teachers whom parents challenge for teaching their kids critical race theory (CRT). Gaslighting, she wants parents to believe the substance of the cop-hating CRT is actually “true history.” This is laughably similar to the Democrats now wanting Americans to believe it’s the GOP that wants to defund the police.

Oddly, less than 24 hours prior, Weingarten said CRT is not taught in schools. But she says she will not stand by while people attack teachers for teaching “true history.” Such as, CRT’s comrade cousin, the heavily debunked by preeminent historians, Project 1619. Which is being countered by The 1776 Report, but which Biden immediately deleted after moving into the White House.

New York City will be giving permanent jobs to 800 unassigned teachers, including “some let go for poor performance or disciplinary issues.” Apparently, New York’s legislators are not as concerned about bad teachers, who may still find employment in other school districts, as they are with “bad” cops. I’m thinking, the teachers support Biden, and the cops do not, is likely another key element affecting the difference in treatment of public education and public safety professions.