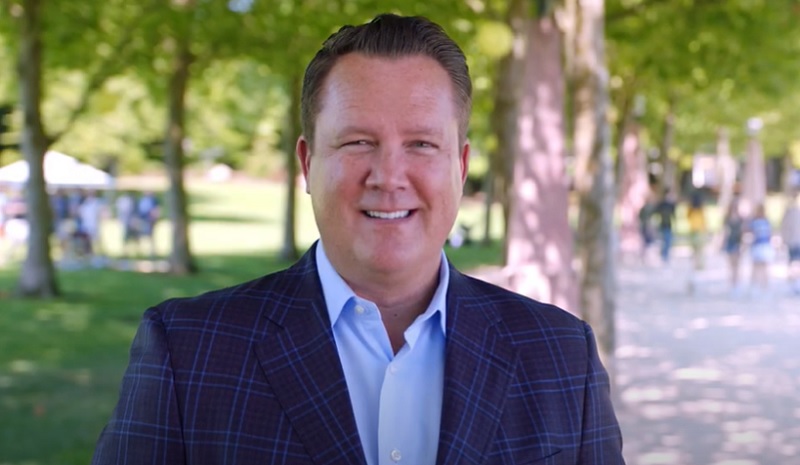 The opinions expressed by Deputy Mayor Nieuwenhuis in this article are his own and do not necessarily represent the opinions of the entire Bellevue City Council. – Editor

An article, which appeared in Law Enforcement Today, by Bellevue, WA. Deputy Mayor Jared Nieuwenhuis, highlights the vast difference between a police-supporting city government just across Lake Washington from the cop-hating government (with a few exceptions) in Seattle.

Photo from a Support our Troops Rally in Bellevue, Washington

The deputy mayor wrote a poignant argument for the damage some new potential legislation, including eliminating qualified immunity, HB 1025, could mean for the state’s cops and public safety. Radical leftist politicians passed a slew of anti-cop legislation in 2021 that politicians spent 2022 attempting to “fix.” That “police reform” legislation failed by doing precisely what law enforcement representatives said it would do—compromise public safety.

Now, they want to pick up where they left off in 2021 and pass more bad laws that will have to be fixed later because they will also fail. Nieuwenhuis described it as “legislative attempts to covertly ‘defund the police’ without ever saying those words.”

This year, the big anti-cop issue is qualified immunity. The term may sound scary, but only after leftists convince people to ignore “qualified” and pay attention only to “immunity.”

Qualified immunity is not blanket immunity. People still have recourse against those who suffer the consequences of genuine police incompetence or criminality. However, qualified immunity is vital to limit people filing frivolous civil lawsuits against cops.

“The supreme court wrote that qualified immunity does not protect ‘the plainly incompetent or those who knowingly violate the law,’ in a 1986 decision.”

Just because you don’t like how an officer did his or her job or reject the outcome doesn’t mean the officer performed incorrectly or made the incident outcome unjustified or unlawful.

Part of the problem is anti-police radicals have no problem lying, telling people that qualified immunity makes “it impossible to sue an officer for violating your rights.” It doesn’t.

“Qualified immunity is essential for effective and diligent community-based policing. While protecting the rights of citizens, it also protects law enforcement from malicious lawsuits that otherwise financially cripple them personally and decimate departments,” wrote the deputy mayor.

Nieuwenhuis lists the most harmful consequences of eliminating qualified immunity. “[O]fficers would leave the state in droves…” and “make the remaining officers all but ineffective in enforcing the law.”

He asks the essential question: “Why would an officer go out on a limb or put themselves in harm’s way knowing that a split-second decision, could bankrupt their entire family?” The question answers itself, right?

I still marvel at new officers going to work in Seattle, Portland, San Francisco, or L.A. Some still have that marvelous naivete that has them believing their political leaders can’t be that bad. They still believe, as I was taught in the academy, that if you do your job with integrity, honesty, and in good faith, you’ll never get in trouble.

This is no longer true. I know cops who were warned that continuing their proactive work ethic, even after it was clear city leaders were targeting them, wound up disciplined or fired—literally for doing their jobs.

Some cities now place so many policy restrictions on officers that it’s nearly impossible not to violate them, even unintentionally. Leftist leaders hide behind the axiom “cops are held to a higher standard,” which they use to discipline officers undeservedly or beyond what is fair.

Recently in Florida, an officer is on video “dragging” an uncooperative, handcuffed female suspect across what looked like smooth pavement, attempting to get her into the jail. While the officer was initially polite, the suspect still refused to cooperate and told the officer he’d have to “drag” her.

The suspect was not injured but the officer violated the letter of an apparent “no-dragging suspects policy.” But rather than disciplined, he was fired. While it admittedly didn’t “look good” (no use of force does), anyone watching the video can see this was not a heinous act that the word “dragging” conjures.

Having been an FTO for many years, I saw what hesitation can do to otherwise good officers. Though people are under the impression these concerns cops have are relatively recent, they’ve been happening for a long time in places like Seattle. The leftist disease began infecting Emerald City politicians and activists for over two decades.

In places like Seattle, Portland, Minneapolis, etc., law enforcement agencies have devolved to where officers can act in good faith, without malice, and still be held criminally liable for legitimate police actions.

That’s why we now see so many officers nationwide disciplined, fired, and even imprisoned after acting in good faith and doing their job correctly. In some cases, this is happening to officers who’ve made a legitimately honest mistake, or simply because anti-police activists don’t like an officer’s actions.

In what other occupation do you risk prison time for doing your job the way you were trained or for making an honest, unintentional error?

The Washington legislature has a slew of pre-filed bills of which the elimination of qualified immunity for cops is one. Pre-filed bills are those filed before the new year’s legislative session so legislators can essentially, as Nieuwenhuis described, “get a jump start” on making people’s lives better or worse (in this state, it’s more often the latter). And, in this case, it’ll definitely make things worse.

Bellevue Deputy Mayor Nieuwenhuis concluded, “When police officers put on their uniforms each morning and put their lives at risk to protect our community, they shouldn’t have to worry about financial ruin just for doing their job. We should protect those who protect us, which means maintaining qualified immunity.”

Thank you, Mr. Deputy Mayor for defending your cops. They needed that.