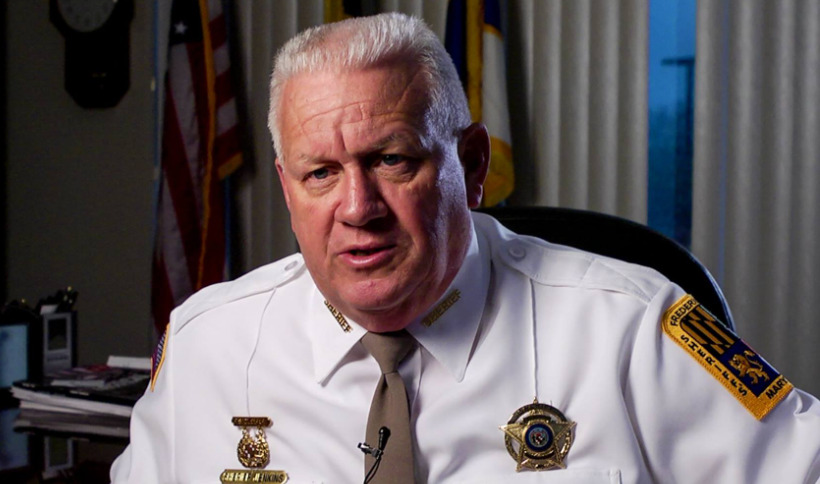 It bears repeating that traffic stops are absolutely one of the most dangerous for any law enforcement officer Anywhere USA, from fictional Mayberry RFD to stark reality streets of New York City. In a phantom-like way, every motorist stopped by police can very well be monstrous, even murderous, as we’ve seen in video after video depicting gunfire once an officer makes it to the driver window.

I’m confident we’re all on the same page as far as that is concerned.

Then there are those who heed differently, perhaps clouded by a level self-importance. This is such a case in Maryland, involving a deputy trying to do his job and a county politician who, by all accounts and his own admission on public radio, should have been arrested and/or cited.

If not for a compliant citizen/motorist stopped for a basic license plate violation, a Frederick County, Maryland deputy was endangered when County Councilman Kai Hagen (who is aspiring to the County Executive throne in 2022) decided it was his business to interfere with the deputy by driving by, circling back, and pulling up to inquire about the African American driver’s welfare.

How do we know that?

A pursuant WFMD radio show with a guest appearance by Frederick County Sheriff Chuck Jenkins apparently exposed complete details for the listening audience to be aware of the incident. Good on him!

In an intriguing twist (or not, if the councilman trolls the sheriff), Councilman Hagen called in to the radio show to dispute the top cop’s account.

It got interestingly contentious, especially when Sheriff Jenkins asked Hagen if he stopped because the motorist was Black, to which the county politician replied, “because there are concerns” about police behavior toward Black Americans.

“Bull#*@t!” was the sheriff’s retort. Again, good on him. Smartly, the sheriff then asked Councilman Hagen if he would have stopped had it been a Caucasian motorist. Hagen admitted, “probably not.”

Wow, how ‘bout that?

The two exchanged on-air commentary and barbs based on some apparent history, referring to each other by first name basis. Not surprising, since law enforcement executives go before council often enough to request budgets increases based on operational costs and to discuss varied issues.

Sheriff Jenkins pointedly and appropriately re-schooled the councilman that the traffic stop is none of his concern, and even clarified that Hagen had only the right to observe from a safe distance away as well as record if he so chose.

The county sheriff hit the nail several times: interference with a lawman during the course of lawful duty is perilous to not only the deputy but also the interloper and any other innocents within proximity.

According to the Frederick News Post, Sheriff Jenkins formally submitted a complaint letter outlining the unlawful actions of Councilman Hagen:

“As elected Sheriff and head of this agency, I am sending this email as a formal complaint to government leadership in regard to actions of Councilman Kai Hagen during the evening of Sunday 6/20/21. Councilman Hagen blatantly and intentionally interfered with the lawful actions of a sworn Deputy Sheriff during the course of a routine traffic stop.

“The actions of Councilman Hagen were obstructing, interfering, and hindering the lawful actions of the deputy during this traffic stop. In addition, Hagen failed to obey the lawful order of the deputy, all of which collectively warranted citations or even the arrest of Hagen for his interference. The deputy held the high ground by not arresting or even citing Hagen, although he would have been justified in taking either action.”

No arguments outta me.

What the sheriff did not contain in the written complaint were Hagen’s racial overtones and accusations of “systemic racism.” But this was addressed on the radio program, one excerpt as follows: “You don’t believe that there’s any such thing as systemic racism in — not only Frederick County but law enforcement in the United States,” Hagen brazenly broadcast on live radio.

Sheriff Jenkins put apt punctuation to Hagen’s grotesque implication, saying, “That’s correct. I do not. If there’s a racist on the line, it’s you, my friend.”

How’s that for telling it like it is, and not being fearful of repercussions about your job or whatever?

Sure is nice to see/hear/learn of a law enforcement official call it like it is, not be intimidated by anyone about his beliefs and principles, stand by his deputies trying to do an increasingly difficult and always life-threatening job, and rebuking the widely spread fallacy of systemic racism.

With the oddly vogue pattern of some law enforcement executives kowtowing to political whims and watching their cops get dragged through the public opinion cesspool even when performing dutifully and within policy, it is reassuring to know Sheriff Jenkins is straightforward with regard to statutes and clearly bolsters his deputies’ safety and sanctity.

Elected officials’ rampant rants against the law enforcement institution have persisted and remain largely unchecked, feeding into then rhetoric and lies which have emboldened bad actors to malign and murder cops without rebuke from political “leaders.”

The sheriff and councilman sparring over the air needed publication. Indeed, we’ve all heard and/or read “enough is enough” regarding utter mistreatment, mischaracterization, and malignment of our country’s courageous cops confronting evildoers.

As the sheriff’s complaint letter emphasized, the deputy was in his right to direct Councilman Hagen to move along, despite the local politician identifying his status. Those types are annoying, throwing around their station in life to influence matters according to their perspective, similar to name-dropping to cull favor.

Personally, I’ve been in the shoes of the Frederick County deputy, several times. Here is one example…

A traffic-stop of a new driver, a teen, for violating right-of-way of cross traffic, was going by the book. Until the teens mom showed up behind me, on the sidewalk, asking questions profusely (as if her offspring was going to the gallows), and insisted several times she speak to her son. He unsafely stopped smack dab in the middle of the street —just like Councilman Hagen did— saying he was nervous when I asked him why he didn’t simply slide into a nearby church parking lot.

Thus, my young driver’s mom joining us in the middle of the street, with vehicles traversing by, was out of the question for a few reasons: her safety, my safety, and, as Sheriff Jenkins addressed under similar circumstances, interference with lawful duties of a police officer. Common sense ought to prevail but sometimes doesn’t.

After the fourth time informing her she can wait to speak with her son until after the stop is concluded with a verbal warning, she crossed her arms in a huff and gave me the death stare. No biggie. One verbal warning later and her son was on his way…into the church parking lot.

Following duty day, I get summoned into the police chief’s office. He asked how I was…followed by having me recount the traffic stop I just explained above.

When I gave my rendition, the chief sort of smirked, looked away, and then said he received a complaint on me…from a friend of his. The teens driver’s mother labeled me “officious.”

I remember thinking, Darn right I was.

Not fond of dancing like Charlie Chaplin in a roadway, with passing cars, while mitigating an admittedly nervous motorist, his careless driving, and his overprotective mom making demands over my shoulder. The corners and pinches cops get into while trying to do the right thing can sometimes be avoidably overwhelming…just like the Frederick County deputy encountered with someone who certainly knew better than to let pandering supersede reasoned judgment and safety factors.

Hagen is bidding for the top spot in Frederick County government, so who knows his true motivations.

Listen to the brief radio segment involving Sheriff Jenkins and Councilman Hagen. What are your thoughts? Based on what you heard in that segment recounting the sheriff’s descriptions and the councilman’s own admissions, should an arrest have been made?