Skip to content
We Don’t Need No Stinking Badges. Um, Yeah, We Do 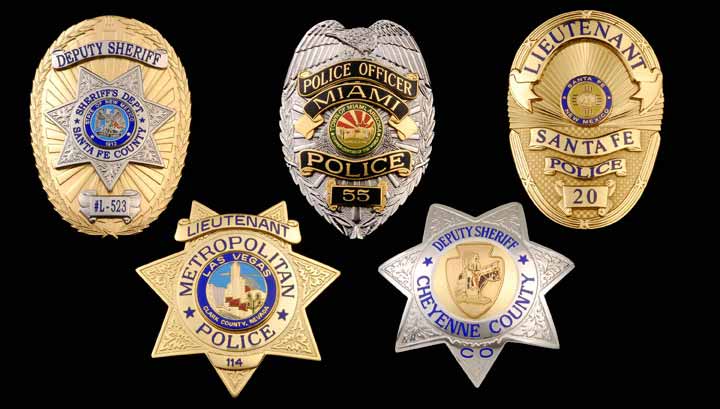 Let’s keep things light as we wrap up the 2019 holiday season. It’s not unusual for cops that nearly every anecdote is police related. No difference here, as you’ll see.

In my book, De-Policing America, as background, I discuss police badges, a topic that always reminds me of a story from when I was a rookie. Another new officer and I were having coffee (I think donuts may have been involved, too) with a veteran who gives “crusty” a good name.

So, we’re sitting there sipping our coffees, and the veteran is giving us sage advice about what we could expect during our careers. He tells us, “I can guarantee you’ll see things on this job you never thought you ever would.” And just then came a loud…

The other officer and I, surprised at the sudden noise, stared at the table—or, what was suddenly lying there on top of it.

The veteran officer’s badge had chosen that moment to abruptly cartwheel off his uniform shirt and crash hard onto the wooden table. Other patrons’ heads turned toward the clatter. The veteran looked at his absconded badge, then back at us, and said, “That can’t be a good sign.”

So, let’s talk about badges, sometimes called shields. Public safety badges have always fascinated me, especially those used by law enforcement. Most cop badges are either circular, oval, or star shaped. Most often police use a shield design and sheriffs use a star with some notable exceptions and some combinations of these.

For example, Chicago, San Francisco, and Las Vegas police use a star motif for their badge. According to Marshall Trimble, Arizona’s official historian, the star shape is an ancient symbol of protection from evil. New Orleans pushes the creative envelop, using a star within a crescent moon design. So, what is the police badge all about?

The badge is not a tool like the gun, baton, flashlight, or other items officers carry. The badge serves as a symbol, which our culture has imbued with power. Most people respect (well, maybe not as much these days) while others are intimidated by police badges.

For officer safety, I looked at two things whenever I spoke with anyone: their hands and their eyes. Knowing where their hands were, and what was or wasn’t in them, helped keep me safe. And their eyes gave me a clue into what they were thinking.

People, both good and bad often looked at my gun. But the next favorite thing they looked at was my badge. After graduating from the academy, friends and family, especially my kids, were all about, “show me your badge.”

It seems most historians agree the police badge began with Sir Robert Peele. It was in London, England that Peele created the first modern, uniformed police force. Sixteen years later, in 1845, craftsmen designed badges, using copper to manufacture them, for the 160 officer police force. You’re probably already where I’m headed. Many believe cop and copper derives from the officers’ copper badges, which seems logical.

Other police nicknames came from Peele’s efforts. In Britain, people also nicknamed police officers “Peelers” and “Bobbies.” The latter is still in use in the U.K. today. Cop is also said to be an acronym for Constable on Patrol.

In fact, much of the symbolism found on a knight’s shield, coat of arms, we also find on a modern law enforcement officer’s badge: colors, texts, and symbols representative of a cop’s jurisdiction.

In my De-Policing book’s chapter on badges I wrote, “In this age of de-policing, I fear the badge no longer possesses the symbolic influence it once did. Along with a lack of respect for the officer naturally follows a declining deference for important law enforcement traditions and symbols of authority.”

I still believe that, but let’s get back to that lighter note I promised. I concluded that chapter with a police-related anecdote (of course I did). I was walking around the outside of an apartment building, checking for a suspicious person reportedly seen earlier peering into windows.

As I approached a corner of the building, I surprised a young woman who was coming from the opposite direction. She gasped, put a hand over her mouth, and her eyes went wide. Then, I saw her eyes focusing on my badge. As she took in that I was a police officer, the look of fear left her eyes. She exhaled, relaxed, and smiled. I told her why I was there. We chatted for a bit. Then, relieved, she went inside, and I continued checking the property for the peeper or prowler.

I finished the badge chapter with these words, “This incident represents one of the things I enjoyed about being one of the ‘good guys.’ That look in people’s eyes when they knew they were safe with me.” When they saw my badge, which told them I was not a bad guy; I was a cop.