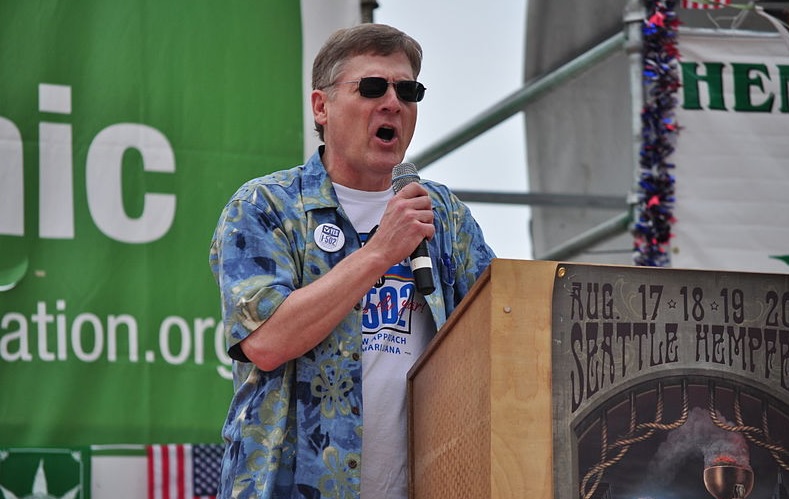 I wasn’t surprised to read that on Christmas that cop-hating Seattle City Attorney Pete Holmes’ office apparently released, with no charges or conditions, a chronic violent offender for an alleged misdemeanor assault of a security guard. The next day, that suspect reoffended, this time reportedly committing a felony assault where he very nearly killed a man by stomping repeatedly on the victim’s face—at City Hall Park. This was his sixth arrest this year, including for violent crimes, according to KOMO News.

When I was still on the job, Holmes was a huge part of what made that job untenable enough for me to retire ten years earlier than I otherwise might have. Holmes has no respect for the law and even less respect for the police officers who enforce it. He has obviously sworn allegiance to his dangerous political ideology rather than the rule of law. Before being elected the city’s top prosecutor in 2010, he’d never prosecuted a crime (I’m still not sure he has unless it was against a cop).

Too often, public officials serve just long enough to screw things up and then move on, sadly in many cases, up the political ladder, to screw up something bigger. Holmes hasn’t moved on, so he’s been busy screwing up Seattle for more than a decade, now. Before we began reading about George Soros’ infernal efforts to hijack city and county prosecutor’s offices across the nation, Holmes’ actions were writing the blueprint for how to run a prosecutor’s office Soros-style—into the ground.

I remember Holmes came into office intent on what he would not prosecute. He annihilated the traditional cooperative relationship between police and prosecutors in Seattle. Holmes immediately began telling cops the kinds of crimes and types of people he would not charge or prosecute. He even began charging and prosecuting some people based on social justice rather than equal justice.

Holmes’ warped prosecution policy can only lead to what happened this past Christmas night at about 10 p.m. A 29-year-old man later identified as Abdalla Jama allegedly began picking fights with customers at a business in Seattle’s Queen Anne Hill district. When a security guard intervened, Jama allegedly tried to punch him and then head-butted the guard. Police arrested Jama and booked him into the King County Jail for assault. Pete Holmes’ office refused to charge Jama and released him unconditionally back onto Seattle’s streets.

In MyNortwest.com, Jason Rantz wrote, “This office routinely opts to forgo prosecution and instead offers a seemingly endless amount of chances to turn one’s life around, even when suspects show no interest in doing so. It’s led to a deadly prolific offender problem that has plagued the city for years, leading to the rising Seattle crime rates.”

Yes, Holmes did that. He has no respect for the risk cops take and the work they do to try to keep citizens safe from the predators he keeps setting loose on them. Last year, KIRO Radio’s Mike Lewis reported, in 2019 local business groups issued a report that found, Pete Holmes “won’t prosecute approximately 50 percent of the non-traffic arrests brought to his office by police…” and that he, “moves so slowly to file charges on the rest that hundreds of offenders disappear and never face jail time or diversion programs….”

Reportedly, witnesses told police, Jama allegedly repeatedly stomped on the 62-year-old victim’s face, “even as the victim appeared to be unconscious.” Court documents showed, “the kicks were so forceful and loud the witness could hear them from inside a car.” Rantz said, “The photos of the victim are so graphic I cannot publish them.” The victim is reportedly in the ICU.

I believe, generally, people are responsible for their actions. So, while Holmes did not stomp on that poor man’s face, he may as well have tied Jama’s shoes. It’s a fact that without Holmes’ long-established policy of leniency toward criminals and disregard for crime victims, Jama would not have been on the streets to allegedly commit this brutal crime. This was not a mistake; this was not negligence; this is an ongoing reckless disregard for public safety by the city attorney.

With the security guard misdemeanor assault incident, Holmes cited problems with proof. That is an obvious lie meant to blame the cops, and it serves as proof Holmes’ prosecutorial recklessness. Probable cause, even proof, a crime was committed was not the problem with Jama. The guard’s complaint, injuries, witness accounts, and the suspect’s history of violence are more than enough for an arrest, prosecution, and conviction.

A police report is a legal document used all the time in criminal courts both misdemeanor and felony. Police reports contain the facts of a case based on the primary officer’s initial investigation. It includes the officers’ observations, any physical evidence collected and, when possible, officer, victim, and witness statements.

Jama obviously should not have been back on the streets to commit a crime against anyone. But this is not an anomaly in Pete Holmes’ world. Holmes has a long history of siding with lawbreakers over the law-abiding, victims, and cops.

Back in 2013, Holmes attended Seattle’s Hempfest. He celebrated Washington State legalizing pot. Holmes shouted into the fog, “We did it!” to people smoking pot in public, which is still illegal post-legalization. On the first day of legalization, Holmes swung by a pot shop, picked up a couple baggies, and promptly broke the law by bringing it to work at city hall.

Still, I have to concede the guy is consistent. Holmes refused to bring charges against himself and then released himself back into the community. And he apologized. I wonder if an apology would have worked with Holmes for an officer caught with booze at work. I’m thinking, no.

Holmes knows this violence is nothing new for Jama. In another Seattle incident, last October, according to the police report and three witnesses, Jama began strangling a victim and then beat him, striking him repeatedly. Jama pleaded guilty and received a mere 15 days in jail. He was also fined $5,000, which is meaningless to people like him—chronic criminals.

Rantz reported Jama has a long criminal history, including lots of violence. Also on his record are two convictions in Colorado combining charges of assault, burglary, theft, and making a false statement. Not surprisingly, the King County (Seattle) Prosecutor’s Office (Dan Satterberg is Pete Holmes at the felony level) said Jama may also have received an assault second-degree (felony) sentence deferment from King County. I’m sure Jama deserved another break, right?

All this unjustified leniency from the city while at the same time they fire police officers for doing their jobs. Then even after binding arbitration ordered the city to rehire one of those officers, the city refused, and a judge agreed (so much for binding). Yet the city continues to release criminal after criminal after criminal for actual crimes against real victims, again, and again, and again. And the one judge who resisted these releases, Holmes helped force into early retirement.

Holmes has consistently defended his leniency, holding that these chronic offenders, are often “homeless,” addicted, and/or mentally ill. He believes the crimes they commit are “poverty” crimes for which their behavior should be excused without consequences. He holds that these criminals, many violent, need “services” and “treatment,” not jail. Okay… and…. what? Holmes says they should get services and treatment, but the vast majority do not because they don’t want it, and they’re not forced to even if they break the law.

As Eric Johnson’s acclaimed documentary, Fight for the Soul of Seattle, points out, these repeat offenders’ addictions and mental health issues prevent most from making rational decisions about their own wellbeing. So, in Holmes’ oh, so finite wisdom, without any coercion or consequences for actions, how does he believe these dangerous folks he keeps releasing to prey on the community are supposed to get the services and treatment he feels they need so they stop committing crimes?

Seattle City Prosecutor Pete Holmes must resign his reign of destruction against Seattle’s criminal justice system. Maybe Mr. Holmes should look at it this way: as far as his legacy goes, resigning would mean he’d finally done something that was truly in the interest of public safety.