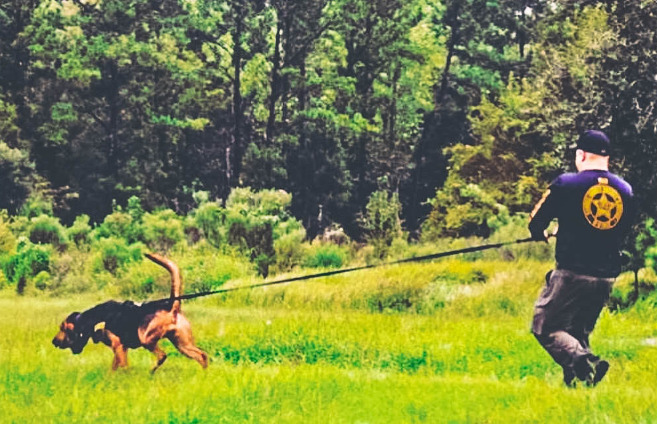 So many provisions enabling successful police work are tested and retested quite often. No law enforcement officer is unfamiliar with the term “in-service training.” And police service animals are included in order to stay sharp on their super skills while their human handlers learn from them so the duo can get the job done and move on to the next call.

As the annual event implies, this is breed-specific for Bloodhounds and their fascinating skillsets which enable police handlers to primarily seek and find missing persons. These Bloodhounds’ super-skills will leave you in awe, even if it sounds awkward.

Per a canine information site, the Bloodhound was “bred specifically to track humans and is world renowned for its tracking capabilities. One common misperception is that the Bloodhounds are so named due to their taste for blood. In fact, Bloodhounds are extremely nonviolent; the name is derived from the very high degree of breeding that went into their creation. Bloodhounds combine an amazing sense of smell with powerful instincts.” If that sounds like music to your ears, imagine how ga-ga cops are to have these lazy-looking creatures track until they run out of earth; “follow your nose wherever it goes” is not just for toucans.

In my neck of the woods, the Hardee County Sheriff’s Office (HCSO) had two teams participate in the Seminar; both Deputy Layport and K-9 “Stella” and Deputy Cotto partnered with K-9 “Harley” were among the 25 handler/K-9 teams. 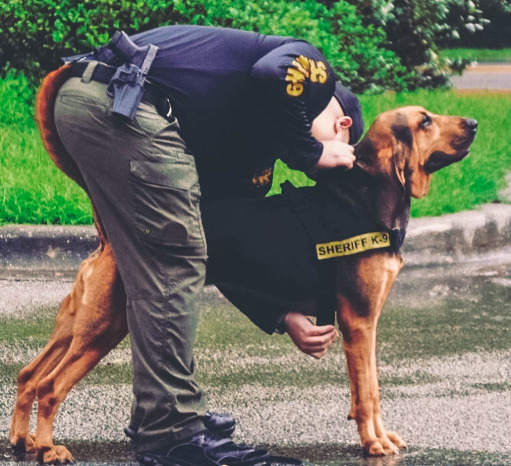 One of several incredible features which grabbed my attention and influenced writing this piece is what I found on the HCSO site, and it has to do with the Bloodhound’s own body fluid (no, not the fire hydrant kind) enhancing its unique capacity to succeed the police mission: “The body of a Bloodhound is said to resemble a tracking machine, due to the dog’s slobber rehydrating and enhancing a scent.” Thank goodness for animal scientists studying and testing this breed, enabling cops to utilize them for work which would otherwise stymie human counterparts and take inordinate amounts of time (often when there is no time to waste).

And what about those goofy-looking floppy ears of a Bloodhound? Well, despite being animated, it seems those two fuzzy curtains playing hard-to-get with the breeze play a vital role as well, especially helpful in police-tracking objectives. Per the Hardee County deputies, after the Bloodhounds “rehydrate” the scent with doggy drool and slobber (like pollinating a floral bed), their “floppy ears then waft that [enriched ]scent to their nose, which has large glands inside that can transfer the information to their brain.” When it’s a match, the dogs are formidably unstoppable. With the huge propensity for Alzheimer’s patients who may wander away in Florida and elsewhere, can you imagine how instrumental Bloodhounds are in locating those who have lost their way?

As a retired cop who is an avid dog lover and owner of a Siberian Husky, I am intrigued with dogs’ sensory abilities and unique designs, especially their olfactory processes. For example, I often place the side of my head to my dog’s nose; he’ll inhale four sniffs, process the scents (like a microprocessor implanted in his nasal canals), then purge it all once he codes whatever it is his brain signals—one big discernible exhalation means he is done with that piece of homework. On to the next odiferous object!

Uniquely, though, Bloodhounds’ droopy ears blocking wind so relatively pure undiluted scents are facilitated to the brain is a fixture among this breed, resulting in either matching the chemical composition of a missing person’s clothing or dismissing it as irrelevant to the tracking mission. We’ve all seen or heard of it in movies or wherever: the Bloodhound is provided whiffs of unique body chemistry emitted by a particular human’s shirt or pants, then sets out to track that specific person down…for as long as it takes.

Dog info sites state Bloodhounds have a seemingly boundless energy store, enabling them to go as far as necessary until they catch up to their target. As a dog data site put it: Bloodhounds “are relaxed and affectionate at home but become alert and tireless when on the trail” and will traverse infinitely when “hunting down escaped convicts.” More music to a police handler’s ears…perhaps not his/her legs though.

Given a Bloodhounds ability to forge forward until mission accomplishment, human partners may need the breather first. Deputy Cotto acknowledges this in the sheriff’s office bulletin: “[The] training attended was truly amazing and really demonstrated how the handler is the only true limitation to the Bloodhound’s capabilities.”

Having worked among many cops with different attributes, despite police training being rather universal, each human has his/her own uniqueness and skillsets brought to the team. Mutual respect capitalizes on each teammates’ talents; that is what we see between police handlers/K-9s as well.

Police canines (among every breed) responds to human facial expressions as well as tonal aspects, respecting its handler’s vocal cues and parlaying it into canine capacities. As cited by PuppyFind.com, Bloodhounds tend to be “very sensitive to the tone of voice, so a firm but approving tone is best.” 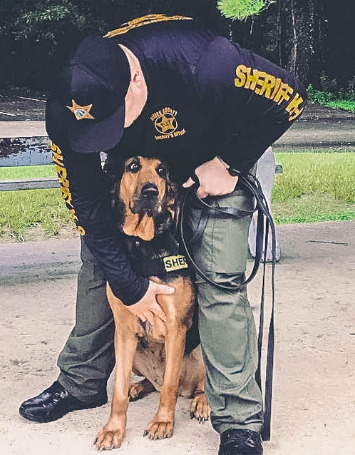 My department’s canine teams exhibited this with all our police dogs (mostly German Shepherds who were taught German language cues).

Synonymously, a police canine handler’s course of action/success relies upon interpretations of the dog’s body language, its “pull” (direction of travel), and its velocity (getting warmer, closer to the mark). Conversely, Bloodhounds send “negative indicators” by intently sitting next to their handler: “The dogs will then show signs of frustration and eventually sit next to their handlers and make eye contact, letting them know the source of the scent is nowhere nearby.”

What if a suspect’s piece of clothing is not available for the sniff test? In the case of physical abduction attempts, the suspect likely grabs/touches the would-be victim. That victim has on him/her transference of the bad guy’s body chemistry: “This works by the bloodhound being introduced to a piece of clothing or body part of where the victim was touched. The K-9 is then able to utilize the scent and ultimately able to track the suspect, finding their man.”

Are Bloodhounds any good with “process of elimination” methods? Indeed, they are. The Hardee County sheriff’s deputies explained the “Missing Man” scenario: “For this exercise, every person in the class, including instructors (totaling over 30 people), all huddled into one small room. Each handler was then instructed to bring their bloodhound into the room and smell everyone inside. One individual will then leave the room on foot and hide anywhere up to 500 yards away. The bloodhound is then brought back into the room and able to distinguish which scent is missing. When Harley was harnessed and given the command to find her man, she immediately indicated to the exit door, letting Deputy Cotto know to leave the room. Harley then sprinted across a large hill and ran into an open field near a pond, where she located the missing man. The purpose of this scenario was to demonstrate that the bloodhound’s intelligence and sense of smell is almost limitless. Harley was able to locate someone without a scent article just by eliminating the other smells that were in the room.” Voila!

According to HillsPet.com, “[Bloodhounds’] abilities are so highly regarded that trails performed by proven trailing Bloodhounds [in-service training mentioned above, coupled with catches during street duty] are admissible as evidence in court.” More music to a canine handler’s ears…as well as to the delight of prosecutors.

Ironically, on the heels of the Bloodhound Scent Tracking training, Deputy Cotto and K-9 Harley got to exemplify their skills in real life. On September 28, the canine/handler duo tracked, sniffed out, and nabbed a fugitive who had an active felony warrant with his name on it. After fleeing patrol units, the bad guy concealed himself in the undercarriage of a truck, and Harley the Bloodhound’s nose was much like a compass arrow directing law enforcement precisely to where the chemical composition was tucked away, hiding from deputies. Next!