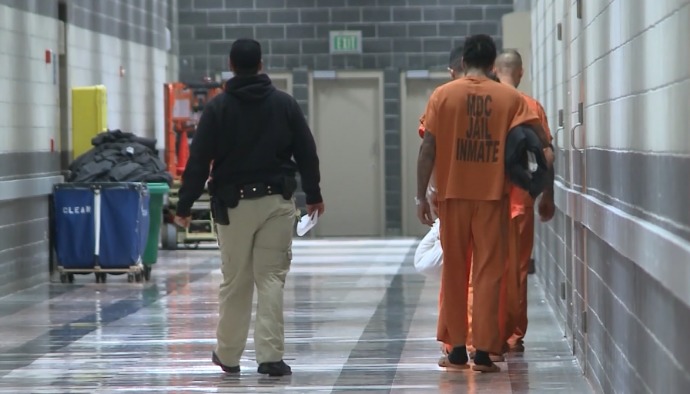 As in many cases where government treads and in all cases where it tramples, there arise unforseen consequences. For example, according to the Albuquerque Journal, the Albuquerque police department (APD) has run into issues with the Metropolitan Detention Center (MDC).

APD says the MDC refused to accept a man they’d arrested for felony assault. Apparently, the suspect was yelling at officers and then “pulled out a large knife and started swinging it at them”—which some cops don’t like. Sounds like the suspect was lucky getting arrested was the only thing that happened to him.

The suspect told the cops he might have a fever and had been feeling ill and coughing. This could be a simple case of “incarceritis” (a serendipitous malady affecting arrested people attempting to go to the hospital instead of jail), but these symptoms align with CCP virus indicators. And so, the officers’ protocols change from a routine booking to jumping through hoops.

Once at the jail, after having taken the prisoner to the hospital to be examined, the MDC staff refused to accept the prisoner. They cited their “COVID-19 area was currently full….” Now, the jails concerns about accepting a prisoner possibly infected with CCP virus are legitimate.

However, what were the APD officers supposed to do? It’s not like there’s an alternative to jail for someone who’d threatened police officers with a knife. I think that’s well into the realm of posing a danger to the community.

Put yourself in those cops’ position. The suspect threatened you, a police officer, with a knife. And you release him back into the community you’re sworn to serve and protect. Your last thoughts are of a person whose name you don’t know yet. It’s the suspect’s next victim. An elderly person, a child, maybe a fellow cop.

In a letter to Julie Morgas Baca, the Bernalillo County Manager, APD Police Chief Michael Greier expressed his concerns in no uncertain terms. “We demand that MDC cease unlawfully refusing to accept arrestees.” Reportedly, it took a few days, but the suspect’s test came back negative for the CCP virus.

But it’s not just suspects whose medical status is in question that are causing the problems. The APD “said there have been ongoing efforts to ‘resolve issues with MDC rejecting offenders who were medically cleared by hospitals.’” Another part of the problem is when the jail refused to book a suspect, this forces the police officers to suffer an extended time exposure to an arrestee who may be infected.

APD reported, “An officer was forced to spend 9 hours with the offender while APD officials tried but failed to convince MDC staff to accept him.” This meant the only alternative for the cops, aside from inviting the suspect for dinner and a sleep-over at one of their homes, was to release a dangerous felon back to the streets. That’s what happened.

Once again, as with the problems some political leaders have with ICE, we see the problems that arise out of setting up one criminal justice system agency against another. Remember, these decisions not to accept some prisoners are not happening at the officer level at either agency. It’s happening at their agency’s command level.

We also have to wonder about a criminal justice system agency choosing to skirt their legal duties. We have to wonder if other agency officials are emulating the examples set by officials across the nation who refuse to cooperate with some federal agencies. Perhaps, they figure if those officials can get away with it, why can’t we?

It’s likely New Mexico is not the only state having these contentious interagency snags. Each side probably has their own staff’s welfare in mind when making these decisions. But they should not abdicate their responsibilities to the community-at-large—and to the police. Choosing to keep their own agency personnel “safe” over other agencies’ staff and the community is not the way public safety is supposed to work. After all, the people are their ultimate “bosses.”