Skip to content
Leftists, Known and Unknown, Insult Police at a Devastating Time for NYPD and All of America’s Cops 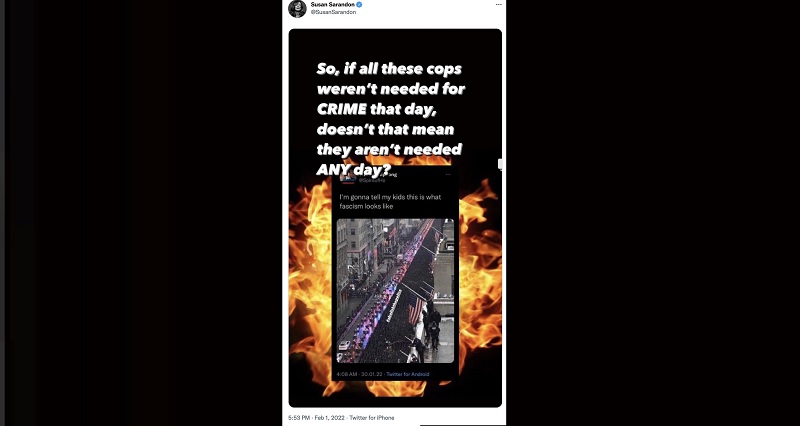 It seems cops aren’t allowed to even stop for a moment to bury our fallen heroes without leftists, known and unknown, spewing their anti-police venom. We all know the “sticks and stones…” admonition our parents gave us as kids, which is normally sound advice. However, we all know, in some contexts, names can indeed hurt.

Sarandon is a well-known leftie; that is not a surprise. However, the vitriol and context, coming from her during a funeral for a slain police officer, raises the affront to a surprising level, even for a Hollywood leftist.

Accompanying a photo of a sea of blue NYPD officers, a cold-blooded Sarandon spewed this tweet: “So, if all these cops weren’t needed for CRIME that day, doesn’t that mean they aren’t needed ANY day?”

Perhaps she could ask the mother of the suspect who murdered those two officers after she called police for help? She needed the cops that day. And, rather than possibly killing or injuring his mother, the officers gave their lives to protect her.

According to the New York Post, Sarandon responded to “a tweet by podcaster Danny Haiphong that showed thousands of NYPD cops flooding Manhattan’s 5th Avenue last week to honor their slain brother, which included the phrase: ‘I’m gonna tell my kids this is what fascism looks like.’”

Sarandon’s tweet drew the justifiable ire of officers nationwide, prompting comments including “she should be ashamed,” “hoping she never needs the cops,” and “she should seek help.” Republican candidate for N.Y. governor, Lee Zeldin tweeted, “Congratulations, Susan Sarandon! You’re now the poster child of an angry, woke, liberal, pro-criminal, anti-law and order jerk. There are other more fitting titles, but it only gets more vulgar from here.”

To be fair, Sarandon offered an oblique apology. After saying she deeply regretted sharing the meme, she said, “I reacted quickly to the picture without connecting it to a police funeral and I realize now how insensitive and deeply disrespectful it was to make that point at that time.”

Tell me, why else would 35,000 police officers, mostly wearing dress blues, flood the streets of New York City in the middle of the day? And at what time would it have been respectful “to make that point?” But she apologized, so I’ll leave it at that.

Still, in the looming shadow of two NYPD funerals in one week, the disrespect didn’t end there. FOX News’ Lawrence Jones, on his new show, Cross Country, conducted some street interviews with New Yorkers, asking them their opinions on the city’s crime increases. He said he couldn’t find one person who would acknowledge the obvious crime problem. However, some acknowledged a mythical “police problem.”

LJ said, “Frankly, I didn’t expect those responses, but I wasn’t the only one. The former cops who were there to give me protection that day were left speechless. One even said this is why he retired. Especially when he heard this….”

A young woman said, “Like I said, man, s#!t happens. People always try [unintelligible]. Cops… sometimes deserve it. But I understand they’re trying to protect as best they can, but to an extent all cops are bastards…. That’s all I really got to say.” That was enough.

One person did acknowledge crime in NYC was a problem but said that’s why “it is important to defund police and invest in communities.” It’s like these are vapid zombies, plucking leftist talking points from a list of Antifa and BLM absurdities.

This brings us to another police insult worth mentioning because it represents so many anti-cop incidents that are not recorded. As reported by The Epoch Times’ Alice Giordano, “A California substitute teacher referred to a mask worn by a student bearing the thin blue line flag for police officers as the next confederate flag and told the teen he had no right ‘bastardizing the American flag.’”

This 50s-something substitute “teacher” told the math class, “If cops don’t like you, they shoot you.” Apparently, unaware he was being video recorded, as provided by CBS 13 Sacramento.

Regardless of how you feel about student mask mandates or even about what the thin blue line flag represents, this teacher was traveling so far out of his lane, he’d careened off the highway and slammed into a concrete abutment. In other words, the school rightly canned his substitute butt.

The teacher berates the eighth-grade boy, telling him “that’s the Confederacy flag.” The Times reports that the student, 13-year-old Lucas Lillar, explains to the unidentified bully teacher he was wearing the TBL flag mask to honor his police officer father. He described the symbol as a sort of talisman he wears to “keep him [his dad] safe.”

Lillar’s mother, Amanda McCallum, said she was “shocked” the teacher was so willing to go “‘toe to toe with her young son’ over his clear anti-police sentiment.” She said the teacher was “clearly uneducated” (I think ignorant is more fitting).

Explaining the teacher’s comments, McCallum felt “no matter where you stand politically,” the interaction was inappropriate. I think, as Lee Zeldin alluded to above, she would have been justified venturing into the “vulgar” with this guy.

McCallum explains how the teacher picked the fight. She said he sat at a desk behind her son who was quietly working on a math assignment. Then the bully began heckling her son about his pro-cop mask. She felt the comments were even worse, coming at “an especially bad time” with the murders of two NYPD officers.