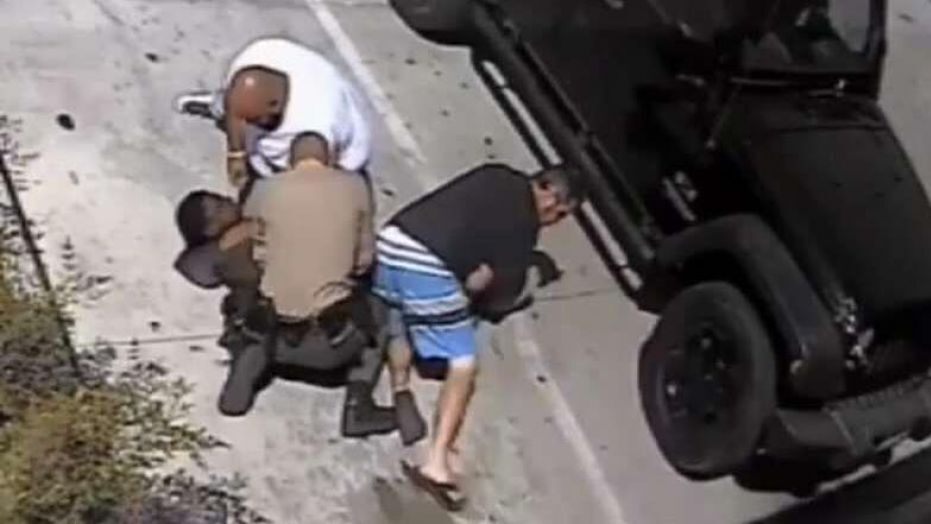 Years ago, when I was a shiny new police officer, I was headed home after my watch one evening. I was driving my personal car northbound on I-5. About five miles south of my exit, I noticed a man darting into and out of traffic, with cars swerving to avoid hitting him.

At one point, the young man with a dazed expression paused and sat on one of the Jersey barriers dividing the northbound from the southbound traffic lanes. It was warm out, and he had no shirt on and was sweating. I switched on my flashers, pulled over, and stopped near the barrier he was on. I was trying to get the guy to talk to me, distract him so he wouldn’t run back into traffic. When it looked like he was about to run into traffic again, I grabbed him.

At that instant, I realized either I had four hands, or someone was helping me. A young woman had also stopped to help. She told me she’d called the Washington State Patrol. Troopers arrived quickly and took him into protective custody. The young man was obviously high on something.

Now, here I’m thinking the woman who’d also stopped was just a Good Samaritan. She was probably thinking the same thing about me. Then we both identified ourselves to the Troopers, me as a police officer, and her as a sheriff’s deputy. In this case, two off duty cops had stopped to help, which is not unusual or unexpected. But sometimes civilians, just good people, also stop to help people. And sometimes those people are cops in trouble.

This brings up the question, should you, shouldn’t you, or must you stop to help a cop in trouble? In California, until recently, it was actually a crime not to help a law enforcement officer if he or she appeared to be in danger or requested help. Gov. Gavin Newsom, no surprise, ended that and  signed the bill into law.

I believe people should help police officers in danger, but I don’t think it should be the law. This could cause confusion and more danger when a person thinks he or she is obligated by law to help, but it’s not necessary, and they may make the situation worse.

Still, it’s not surprising that California Democrats would waste time on legislation that rescinded a law specifically intended to help law enforcement officers. Although, I can think of a bunch of reasons someone might not help an officer. What if you are infirmed, disabled, too weak, ill, injured, etc.? However, if you’re none of these things, regardless of a law, you should be ashamed if you don’t at least try to help an officer in trouble.

This is where we must remember, while police officers are well trained and well equipped, there are situations when bad guys get the drop on cops. From being ambushed, outnumbered, or simply over-matched for whatever reason, officers sometimes need help. Fortunately, some people are willing to help a cop in trouble.

CBS Morning News reported, in 2017, on a freeway near Phoenix, AZ, someone shot at a vehicle driving on the freeway, causing the woman driving that car to crash. While the trooper was investigating the collision, the suspect ambushed him, shooting him in the shoulder. According to Colonel Frank Milstead, Director of the Arizona Department of Public Safety, the suspect had the wounded trooper on the ground was smashing his head onto the pavement. A passing motorist stopped, and the trooper told the man he needed help.

The passerby got a gun from his truck, confronted the suspect, and yelled repeatedly for him to “stand down.” When the suspect didn’t stop, the passerby shot and killed the suspect. The woman in the original collision later died. The trooper would fully recover.

In 2018, in Seattle, literally in the shadow of the Space Needle, an armed Good Samaritan followed and held a man armed with a knife at bay until police arrived. The man had just stabbed his girlfriend to death in front of their five-year-old son.

Just last November, in Napoleon Township, MI., a couple pulled over to help an officer who was struggling on the side of the roadway with a high, mentally ill man. The officer was trying to hold him down while waiting for backup, which was reportedly 10 minutes away. The man helped the officer hold the wild man down while his wife directed traffic away from them.

Police Chief Duane Pittman was grateful they helped his officer, and he had some good advice for people who stop to help cops. He said he doesn’t want people placed in jeopardy, and they should listen to the officer for whether he or she wants or needs help. Pittman said, “Good judgment. Look at the situation and if you can help that’s great.”

The man and woman serve as an excellent example of how to help a cop in danger. According to Mlive.com, “The husband approached the scene with his hands in the air, and said he was there to help, which let [Officer] Peters know what was happening.”

And, finally, during a visit to Chile, even Pope Francis stopped to help a cop. A mounted police officer’s horse reared and tossed her to the ground on the Pope’s procession route. The Pope got out of his Popemobile and walked over to check on the officer’s condition.

There are other resources available such as an article detailing some specifics about how people can help police officers in danger. Greg Ellifritz, a police officer and the president of Active Response Training, has written an article you may find useful.

Issues covered are things like how to approach an officer struggling with a resisting suspect, especially if you are armed. What to say to the officer. What to do if the officer says he or she needs or doesn’t need help. And what to do after the suspect has been neutralized or is under control (this means handcuffed and not resisting).

Hopefully, you will never find yourself in such a situation, but if you do, a person helping a cop in trouble is a wonderful act. But no one wants you to get hurt, especially because the officer or other responding cops mistook you for a bad guy with a gun. So, be smart about it.

A little common sense, some research, and a little mental preparation can go a long way. Oh, and if you are a concealed-carrier, it won’t hurt to hit the gun range regularly. And remember, it’s much better to have a gun and not need it, than the other way ‘round.