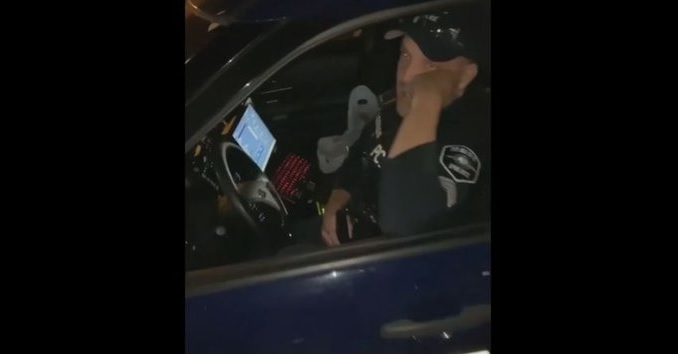 It’s not unusual to see a butcher holding a knife or a carpenter holding a hammer while not technically using them. Someone could kill a person with both, right? But, sadly, guns in the hands of police officers have become things of evil—even if in the context there is no threat.

Recently, the Seattle Police Department (SPD) Office of Police Accountability (OPA) started an investigation into another frivolous, manufactured outrage citizen complaint against an officer. According to The Police Tribune, the citizen who identified himself as Future Crystals, observed an SPD officer in his patrol car parked near Cal Anderson Park. This is the park that served as the de facto “capitol” of the CHOP/CHAZ “autonomous” zone.

Crystals told KIRO News, “To me it looked like he was following me. I was scared to my core. It looked like he was going to be harassing a homeless person.” Crystals said he saw the officer pull a handgun “from his waist.” So, in an odd move for anyone “scared to my core,” the “self-described” activist continued walking toward the officer filming him and asking why he’d drawn his gun.

The Tribune reported that Crystals claimed to have been attempting to “distract him from the homeless person.” In police work, there’s something else cops call that: Obstructing a public officer. Yeah, it’s a crime. Whether Crystals was reading the officer’s mind or using his crystal ball (couldn’t resist), how could he possibly know what the officer was thinking, regarding the “homeless” person?

However, gun drawn in lap while some masked person intent on obstructing your duty approaches your police car seems a prudent idea in this vehemently anti-police environment. When Crystals asked the officer why he had his gun drawn, the officer asked if Crystals had heard about the two deputies who were shot in Los Angeles at a Metro station. Crystals said he did not.

The officer explains how someone had ambushed two L.A. County Deputies, shooting them both in the head while they sat in their patrol car. If their guns had been drawn and in their laps when that scum approached and attempted to murder them, they may have been able to fire back. This is not a criticism; most officers do not routinely do this. But, again, in today’s leftist-run cities, it’s seeming more and more prudent every day.

Not only do too many mayors and city councils tolerate hatred toward the cops, they encourage it with their anti-police statements and actions and by their continual toleration of violence toward cops. To this day, I have not heard of the Seattle mayor or one city council member calling or visiting an officer in the hospital or otherwise injured during the many riots. The New York Post reported, on July 25, 2020, “Nearly 60 Seattle police officers were injured during weekend clashes with explosive-hurling anti-cop demonstrators. If I’m wrong about any official visiting or calling, I’d be thrilled to apologize.

After Crystals apparently walked away, he happened to have a friend nearby who said he knows the officer. They went back to speak with him. The officer explained, “One of the most dangerous places for a police officer to be is caught in their car. And so, to be able to defend themselves, you can take reasonable steps, which I did.” Yes, he did. Crystals being ostensibly offended is not enough for an officer to risk his or her life.

The Tribune said Crystals said cops weren’t supposed to be pulling guns on people; they were supposed to be protecting them. The video shows the officer never pointed his gun at anyone. Think about the officer’s location. Cal Anderson Park is still a magnet for cop-haters and those who would do officers harm. Many weapons have been found in and around the park, hidden for later use.

Put yourself in the officer’s position. You watch on TV images of that waste of air walking up to a patrol car and firing several shots into the passenger’s window at the deputies. Then, on future duty shifts, you are in your own patrol car, and someone in a mask approaches your car. How would you feel? What would you do to be safe? Would you bet your life that person wouldn’t pull a weapon?

I recall when I was in my early 20s and still a decade away from beginning my career as a cop. A high school friend of mine had become a police officer in a nearby town. It was a small town, but it got lots of through traffic on its dark, rural highway that connected several colleges in the region. One day, he showed me a defensive technique he’d incorporated into his nighttime traffic stop routine, since his back up was usually so far away.

When out on suspicious daytime traffic stops and at night, he’d hold his flashlight in one hand, and in his other hand, he’d hold a clipboard with his ticket book. In the hand holding the clipboard, he held his pistol. Non-cops, and even some cops, at first glance, might think this is paranoid. Maybe. However, there is a legitimate tactical argument regarding the time it takes to react to a person drawing a gun on the officer and the officer drawing his or her firearm.

Cops are necessarily in a reactive position (the bad guy knows what he’s going to do; the cop can only anticipate what the bad guy might do) and every second matters when it’s life or death. And if this tactic was prudent for an officer working a dark rural highway back in a cop-friendly town in the 1980s, it’s sure prudent for an officer working in a city hostile to law enforcement in cop-hating 2020.