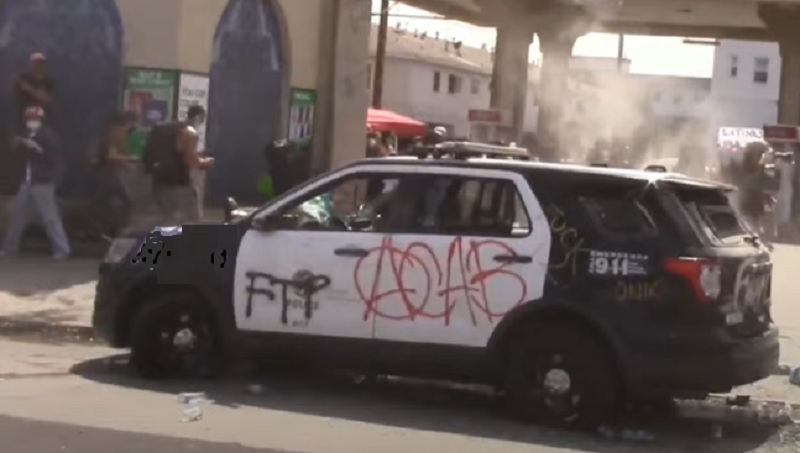 There are two critical and somewhat linked issues for law enforcement officers to revisit on occasion because if proponents are successful, it’ll be impossible for cops to do their jobs effectively, if at all. One issue has cop-haters taking away a protection and one has them adding a barrier.

These are the elimination of qualified immunity for cops and the addition of the “duty to intervene” in “excessive force” encounters.

Qualified immunity is simply the protection afforded to public officials who make discretionary decisions in novel situations so that, even if they make a mistake or engage in unpopular decision making, they are protected legally. ‘Discretionary’ simply means left to an individual’s… judgment, not fixed rules, and today’s militants demand law enforcement lose that right in favor of…what? That every action be mandatory?

LawOfficer.com points out what cops dread whenever partisan politics interfere with police work: what does the change look like in a cop’s world—on the streets?

A duty to intervene requires a police officer to verbally or physically intervene if he or she feels another officer is using excessive force.

But many people don’t understand what the statute does and doesn’t do. Qualified immunity doesn’t shield officers from criminal liability. It does prevent people from bringing frivolously civil suits against police for actions done in good faith. For example, without qualified immunity, a cop risks losing his or her house. Even when doing the job properly.

Recently, the National Police Association entered… an amicus brief in support of qualified immunity in Maryland. This is one of a series of filings they have made to encourage the Federal Courts to remember key authorities necessary for police to control those who break the law while otherwise also exercising protected First Amendment rights.

Remember, a police officer can act in good faith, but a situation can still end horribly. That’s the nature of human beings making split second, life and death decisions. The bottom line is why would any person become a law enforcement officer if their personal property is under constant threat of a court-ordered forfeiture?

A duty to intervene is a more easily understood concept, but is just as hazardous for cops. On paper, wanting officers to stop other officers from using excessive force is reasonable. But, again, what does that policy or law look like in real life?

Places like Minneapolis have made it so officers can be held criminally liable for another officer’s actions if they don’t verbally and physically intervene in what leftist politicians “excessive force.”

First, the concept presumes excessive force is consistently objectively definable in every circumstance. In certain situations, of course, excessive force is obvious. For example, using force against a handcuffed, non-resisting suspect.

The vast majority of officers know what’s “over the line” and will step in to prevent an emotionally charged officer from violating policy or law. Cops do this not only because it protects the suspect but also to protect their fellow officers.

As a rookie fresh out of the academy, you’re hyperaware of all the partisan political propaganda they force-fed you. Things like “implicit bias,” “racial equity,” and “police brutality.” And, in places like Minneapolis, they’ve taught you it’s your “duty to intervene” if you observe another officer using what you feel is “excessive force” against a suspect.

Who out of these three categories would more likely know what constitutes excessive force? Having been a cop for a long time, I’m going with the veteran FTO. This doesn’t mean that every veteran FTO will get it right every time—but most will most of the time.

So, in a cop’s world, the student officer responds with her FTO to a fight disturbance between two intoxicated men. One combatant is cooperative, and the other is not. While the student watches the compliant subject, the FTO has to go hand-on when the other man grabs his arm.

The FTO uses a wristy-twisty technique to take the suspect to the ground. The suspect’s yelling and the passing traffic drown out other sounds, including what the FTO is trying to tell his student officer. Suddenly, the FTO, on the ground, is holding the suspect’s arm with one hand and starts punching the suspect’s back, repeatedly. The FTO is still yelling something the student can’t understand.

Instead of helping, the rookie thinks, this is obviously excessive force. Because instructors have taught her, she has a duty to intervene, and can get in serious trouble if she doesn’t, she yells at her FTO to stop. The FTO still can’t hear her, and now he’s striking the suspect in the head.

The FTO sees it’s his student and yells back at her, “What the F…. are you doing?” The suspect is now dazed and no longer resisting. The rookie lets go of the FTO’s belt. The FTO rolls the suspect onto his back, revealing a knife laying on the ground next to the man. The FTO kicks it away from the suspect’s reach, handcuffs him, and calls for medics.

Every incident won’t go like this—most won’t. But that’s because the vast majority of the millions of citizen contacts that cops have every year do not involve force. FBI statistics tell us police uses of force are exceedingly rare. And those incidents where cops injure or kill a suspect are even rarer.

Whether eliminating qualified immunity or adding a duty to intervene, responsible parties must consider the real-life implications of these policies and what they mean to cops—in real life.